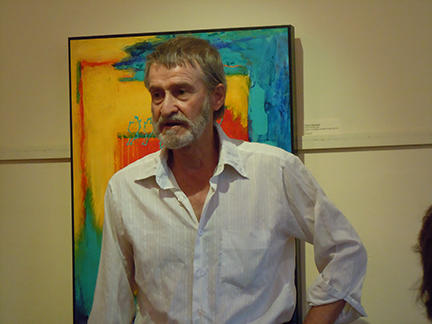 Raymond Fraser was a neighbour a few doors down on Shore Street; he often strolled along the river and we’d chat. Ray was one of the Montréal Storytellers along with John Metcalf, Ray Smith, Hugh Hood, and Clark Blaise, and he worried that they might be responsible for what he called “the plague of readings” that is current.

Prolific and gifted as a writer of fiction, nonfiction, poetry, and even tabloid journalism, he was always writing. His rooms were covered with scraps of paper with new ideas and phrases. He was a serious writer, but he had a cagey, humourous side, involved over the years with friends in straight-faced, but faux projects like The Flat Earth Society of Canada, and The Stewart Absolute Monarchy in Exile (his title in said nobility was Prince Raymond).

In the slightly less regal world Ray was awarded the Order of New Brunswick, and the Lt. Governor’s Award for High Achievement in the Arts. He was a quiet man, a bit of an outsider, but happy when awards and kudos came his way.

He wrote much, including a boxing book on Yvon Durelle, the Fighting Fisherman, and he tolerated editors. When younger he played hockey and baseball and he travelled a lot: Dublin, Paris, and Spain, which he loved. When living in Montreal, Ray recorded a New Brunswick logging song on Leonard Cohen’s reel-to-reel; however, the tapes flew off madly and Ray worried that he had ruined the demos for Cohen’s first album:

“The session went along quite well at the beginning. But then as I was moving through the fourth verse of that great doleful lumberman’s ballad, Peter Emberly, I fumbled a line, and when I tried to redo it found I couldn’t remember exactly how it went, and would need to think about it a minute. I shut the machine off and went through the song again in my head. The words came back, but now I had to rewind the machine a bit so I could sing over where I’d made the mistake. And this was where I got into trouble. I rewound back too far, then fast-forwarded too far ahead, then went back too far again. It was very hard to find the right place. I was jumping from stop to rewind to play to fast-forward to stop to I don’t know what. And in my frustration I must have hit some buttons I shouldn’t have, because Leonard was singing again and I didn’t know if I was forward or backward and so I slammed a button and then another and suddenly the reel stuck and the tape flew off and went flying all over the table and floor like a great string of confetti.”

Ray lived for a few years on his boat Spanish Jack, available for charter on the Miramichi River, hence, the jaunty nautical touch to some of his author photos.  At The Fiddlehead we recently accepted a new story from Ray about a drowning in the Miramichi River; this story will run in the 2019 summer issue.

Prince Raymond died this fall as the weather was turning misty and strange; every few days I think I see him walking down by the river.

I was sad to hear of the passing of Ray Fraser. Ray was one of a kind and made many contributions to the literary life of New Brunswick. He had a rich storied life, from his years growing up in New Brunswick, his involvement with Alden Nowlan and the Flat Earth Society, to his years in Montreal when he was part of the Montreal Story Tellers with Clark Blaise, Hugh Hood, John Metcalf, and Ray Smith to his later productive years in New Brunswick. I loved his presentation in performance of Alden Nolan's Living Room at the first Alden Nowlan Literary Festival. I appreciated his originality, candour, and unusual intelligence. He was one of the best writers of his generation in New Brunswick.

Permalink Submitted by David Cadogan (not verified) on Wed, 11/21/2018 - 09:42
Mark Jarman got Ray beautifully. Ray got the Miramichi beautifully.

Permalink Submitted by Chris Clarke (not verified) on Thu, 12/06/2018 - 03:09
I had the honor and Privilage to meet Ray this past summer. It’s with great sadness to hear of his passing. He was one of the maritime greats. His work will live on to inspire a new generation of writers and poets. Thanks for everything you’ve done Ray!