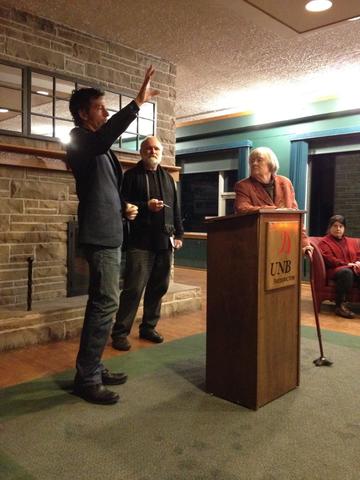 I met Steven Heighton decades ago at a “Wild Writers” short story conference in Stratford, organized by John Metcalf to bring a new generation of story writers together to create connections.  I guess it worked.  Steve and I shot pool and chatted and he seemed very down to earth, no airs.  We were not close, but stayed in touch; as editor Bethany Gibson said to me the other day, he had a way to make you feel like a good friend.  Steve sent me links to his music to see if I could add harmonica and sent me “envious good wishes” when I was hiding from winter in Marseille.  Once I stayed at his house in Kingston for the lit-fest and he visited my house when he read at UNB with Nancy Bauer, a boisterous event on Valentine’s Day with a very lively Q&A that continued downhill at the Lunar Rogue pub.  The next day he was booked to go by bus to Saint John to read, but I drove him just so we could shoot the breeze on the drive down.  I didn’t say anything, but I greatly admired his journey to Greece to work as a volunteer in a transit camp helping refugees from Syria and elsewhere; on this tour he was drawing on this material.

In 2019 he had a slightly spooky story in a very strong Fiddlehead Summer Fiction Issue and he let us know that an earlier story of his from The Fiddlehead was being adapted for film.

Very recently I have been editing for Best Canadian Stories 2022 and Martha Sharpe mentioned a story by Steve, "Instructions for Drowning", published in the Threepenny Review.  I chose that story, but I also had my eye on a second piece by Steve; Clarissa Hurley steered me to that one.  I emailed Steve to tell him I was taking at least one and he was very happy, but told me he was in the hospital.  He tried to keep his illness quiet.  In my email I said I had been out walking the nearby golf course and stopped for a pint; he replied that he wished he could join me for a walk and a beer, perhaps when he came out of the other side of this.  That was a Saturday.  On Tuesday I heard the news from Katia Grubisic that he was dead.  That was a shock as he was so fit and I thought there was some hope.  The other side.

I’m glad I sent my email to Steve when I did.  A walk on the golf course by spring streams, fresh air, a lively pint and conversation; I can be grumpy and don’t always appreciate such simple things, but I will remember Steve’s last message and try to be better in the world.  And Biblioasis Press says they are happy to run two pieces by Steve in the anthology as a tribute to his talent; as well, they are publishing his next collection, also titled Instructions for Drowning, and edited by Mr. Metcalf, who brought us together.