Douglas Gibson, former senior editor and publisher at McClelland & Stewart and Douglas Gibson Books, will deliver a public lecture entitled “Across Canada by Story: A Coast-to-Coast Literary Adventure” on Monday, 19 November at Memorial Hall on the University of New Brunswick’s Fredericton campus, beginning at 7:30 pm.

Following a 45-year career as what the Globe & Mail has called a “publishing icon,” Gibson has recounted his collaborations with authors and politicians including Alice Munro, Margaret Atwood, Pierre Trudeau, and others in books titled Stories about Storytellers and Across Canada by Story. The public talk based on the latter has delighted audiences across the United Kingdom, China, Mexico, and Canada with its rare perspectives on the editorial process and unique insights on the camaraderie and tension between writers and their publishers. A warm and charismatic speaker, Gibson represents an unparalleled authority on some of North American’s most beloved literary icons.

According to Alistair MacLeod, “No one has done more for Canadian literature than this man, Douglas Gibson.” Gibson’s lecture, sponsored by the University of New Brunswick’s Department of English, Faculty of Arts, and Bookstore, is free and open to the public. 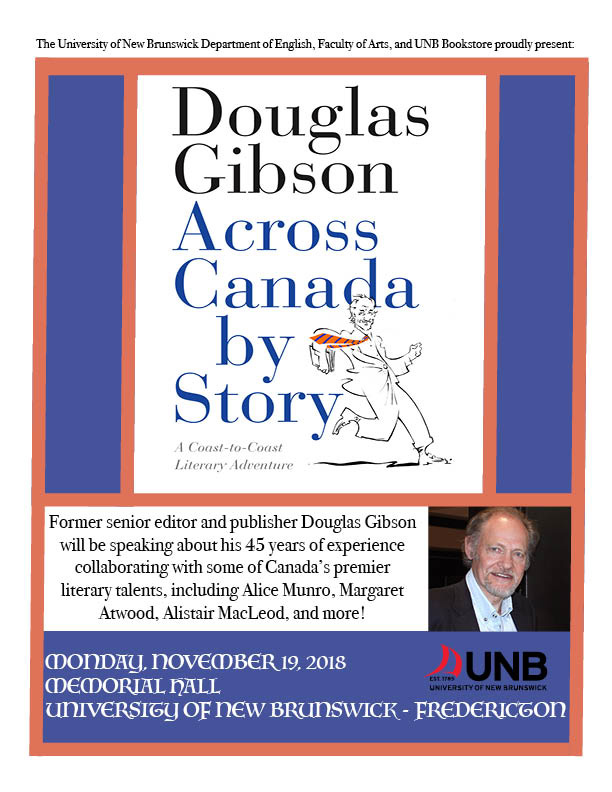