I loved The Dream of Water: a memoir (Fawcett/Henry Holt: 1996), in which Kyoko Mori tells of her return visit to Japan after living in the US for a dozen years and in so doing provides fascinating insights into Japanese culture. A native of Japan who’s fluent in Japanese, she’s aware of standing out as foreign, likely American, due to her facial expressions, clothing, and the way she walks and moves. Ms. Mori writes that although words to express emotions exist in literary Japanese, they don’t in spoken Japanese. While her mother’s family loves her very much, even they can only nonverbally comfort her about her mother’s suicide. Formality and consideration of others is embedded in the language at the expense of self-expression, thus further complicating her dealings with her father. Sexism, too, is part of Japanese — just as it remains in many languages. All of that creates tension and distance, making her realize that, despite her love for her family, she could never live in Japan again. A memorable book, The Dream of Water continues to resonate, particularly Ms. Mori’s graceful, poignant rendering of her grief over her mother’s death. I aspire to make my memoir-in-process as thoughtful and engaging. 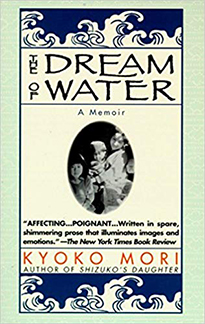 R. L. Aseret earned an MFA in Creative Writing, and is constantly in the middle of at least one book and one journal. She believes daily reading (and writing) is necessary for survival, and acts in support of social and economic justice.