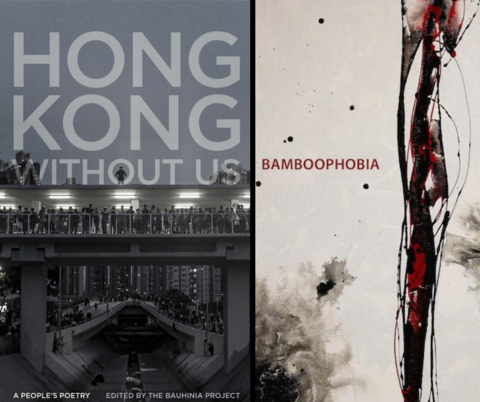 A few days ago I finished writing a primer sort of review about the anthology Hong Kong Without Us, published by University of Georgia, mostly to provide a little bit more cultural and historical context for Anglo readers outside of HK to maybe facilitate a more nuanced reading.

It is an odd anthology in that it was channeled and edited by an anonymous person or team who call themselves The Bauhinia Project (the official flower of HK), and then edited and translated by Jeffrey Yang. The writing inside are submitted anonymously by everyday folks in Hong Kong, who have been living under fear of “crossing the red line” of the National Security Law that came into effect on June 30, 2020. The red line itself is meant to be vague, to encourage folks beneath its charm to over-police themselves, i.e. don’t do or say anything that comes even remotely close to a tickle of its fibre.

It’s interesting in that most of the entries are not meant to be poetry, but more like high school notes snuck among hands under desks, to pass on to others something small and precious. And the reader gets to eavesdrop on the tsk-tsks, from the outside. When presented as an anthology, you can hear from the accumulation of whispers the hushed pulse of an entire city, a nexus through which very large sums of money and competing political ideologies between the west and east flowed through. Some of the writing also present in a certain naivete what I had tried to reproduce in my first book, namely to try to find my way to write from some primordial nativism, unlearning all the tricks I had learned to be a “persuasive” writer. It helps that a sizable chunk of the work are written by teens and early 20 somethings (the youngest was five, if I remember correctly). With innocent lines like “Better to shoot at me than at girls./ A girl’s face is very important.”, like, what do you do with that aside from having your heart melt and broken at the same time?

Can I add one more, even though I haven’t read it yet? ko ko thett’s upcoming Bamboophobia, to be released fall this year by Zephyr Press. I’ve read chunks of his first book, and some teasers from the upcoming one as well, from what I can gather online. From what I’ve read, his poetry is unabashedly political, witty, excessive, brutal, funny and decidedly unapologetic, all at the same time. He writes in English but doesn’t seem to give a fuck if he’s read by western readers. His allusions and frames of references are native, western, South American, just whatever informs him informs his work, and doesn’t bother if the reader gets it, or can’t keep up (I don’t get most of it myself, but bits that I do, I glean an immense intelligence). That’s mixed with a rhythm and pace that at first I thought was appropriating hip-hop, but upon closer inspection, seems to sound more quotidian Asian (I could be projecting and be totally wrong), in the rat-a-tat-tatness and frenzied buildup of puns and rhymes, it’s one that I recognize in how Hongkongers like to outwit one another over too many drinks after a 12-hr shift at a 9-5 job anyway.

The one biographical thing I found out about him though that I think is pretty great, is that the speaker in his poems, who’s this too-smart-for-you-shit-talking-slang-slinger, is probably not far from who he is as a person, but this same person also put his own writing in the backburner to translate as many Burmese poets as he could first, because no one else is doing it. And he did some on-the-front-line non-profit work too I think, the details of which escape me at the moment. But really get-your-hands-dirty stuff-- I just looked it up:
“I was working in Romania for the resettlement of Kachin refugees from Burma. The Kachin are one of the major ethnic groups from northern Burma. Many of them are still at war with the state of Burma-Myanmar. At one point I was hauling loads of second-hand clothing I collected in Brussels, Belgium for the refugees in Galati, Romania. I was working for a behemoth of an organization for refugees, and was very troubled by the thought that my burden representing that organization might be probably akin to Kiplingesque White Man’s Burden.”

In a recent interview he mentioned that he’s working on a new suite of poems about the 2021 coup, that should be interesting when the world is ready to look at Myanmar in the face after the blood has dried.

Sam Cheuk is a Hong Kong-born Canadian poet and author of Love Figures (Insomniac Press, 2011), Deus et Machina (Baseline Press, 2017) and Postscripts from a City Burning (Palimpsest Press, 2021) on the 2019 protests in Hong Kong and its aftermath. #StandWithHongKong #香港人加油 #MilkTeaAlliance. Sam's poems are featured in issue 289 (Autumn 2021) of The Fiddlehead.