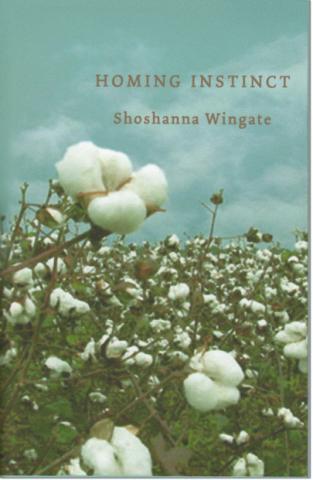 This past October I had the opportunity to both attend and participate in the 8thannual Poetry Weekend on the UNB campus here in Fredericton. The three day event is a veritable Newport festival of poetry performance that provides a collegial atmosphere for established and emerging writers alike to read selections of their work to an enthusiastic public.

Shoshanna Wingate, one of the weekend’s standouts, captivated the audience with powerful and emotionally sincere poems read from her recently published short collection Homing Instinct.

Content aside, Homing Instinct is a handsome, limited edition hand-sewn chapbook meticulously assembled using specifically selected archival papers and print pigments, making it a work of art in its own right, and a delight to handle. Congratulations to Frog Hollow Press for constructing yet another distinctive bibliophile edition.

Home and all of its accoutrements, conventions, and cultural imperatives are made accountable in Wingate’s collection as it moves inexorably towards the final reckoning we encounter in the closing poem. “Neighbours” and “The Cotton Mill” come early in the book, and as companion pieces, work to both establish and entrench the prevailing thematic locus.

In “Neighbours,” tensions between adult realities and the child speaker’s narration of her perceived experience are subtly communicated, as in the offhand remark “my papa says it’s quaint and cheap,” describing why they are ostensibly squatting in an Appalachian backwater. The use of statement also works as an effective counterpoint to the bucolic scene, as when the speaker surprises us by suddenly entering the narrative in remarking “no one knows people live down here,” thus revealing her agency and perspective in the world of the poem. The children “drape the willows around [their] necks / like scarves, serve moss tea to frogs / on stumps that serve as parlour sets, / and fan [themselves] with ferns like queens” as the poem closes, and despite what the reader now knows of actualities, the notion of home as filtered through the speaker is as pure, satisfying, and real as we will encounter in these pages.

Wingate continues the childhood Appalachian narrative in “The Cotton Mill,” though the voice of the poem seems more worldly and knowing. Gone is the fanciful, rustic paradise of the previous poem, and in its place we find a once functioning cotton mill — the blind monster of the poem — with all its windows bricked in, eyelessly glowering over the landscape like a fallen Oedipus. The choral device of repeating the first two lines — “[w]e raced our bikes around its glass-strewn lot, / along abandoned railroad tracks down river” — in the middle of the poem, aside from acting as a temporal reset and referential tie to classical tragic texts, is yet another means of emphasizing the shift in point-of-view. The children continue to play in this environment, but its realities are very much foregrounded, and instead of fanciful, imaginative games of make-believe, they “[pitch] rocks at the windowless windows” and have “all the injuries / of youth to unleash: schoolyard fights, our fathers’ / worthless jobs…[,] our lack / of anything better to do.” That the poem can be read as a post-industrial vision of America, it’s economic and accompanying cultural infrastructure in ruins, is likely no accident, nor is the portentous arrival of “folks even poorer than us” brought, ironically, by the “Holy Roller Church” — an apparent allusion to outsourcing, and a not so veiled condemnation of missionary interference.

Mid-century cult crime novelist Jim Thompson has one of his characters remark of homicidal anti-hero Lou Ford in The Killer Inside Me that “a weed is a plant out of place,” and I couldn’t help but be reminded of the wisdom in those words while considering the closing poem in Homing Instinct, “The City Dwellers.” Weeds are featured prominently, and their invasive, almost malevolent agency is masterfully presented and complicated throughout. “Their roots,” we’re told, are “as thick as wrists, had gnarled split tails, / white flesh… as long as twinned ermines.” Ominous, certainly, but in choosing ermines as a metaphor, Wingate intimates that the weeds, in some capacity, can be read as regal or noble, a characteristic compounded by their blooming buds, described as “round like Queen Anne’s lace.”

It’s this notion of belonging and the place of competing identities within the speaker relative to established definitions of home that Wingate wrestles with in “The City Dwellers.” As a “domesticated” space, home is rendered untenable here — something that can’t be, or refuses to be, fashioned to the speaker’s will. Having settled in the rural environment of the poem some years ago after having previously lived an urban and presumably itinerant lifestyle, she struggles to impose the learned sense of order she believes is necessary to realizing her culturally prescribed idea of home. The fence built by a neighbour, in all likelihood to block the untidy, unconventional space the narrator exhaustively labours to tame, is met with relief, as it brings “some outline of order.”

A similar feeling of perceived contentment or groundedness is communicated when Wingate writes off of her subject by interpolating a back-story episode wherein her speaker is put at peace by watching a former neighbour exercise his trained pigeons on the roof of an urban walk-up. But it’s precisely this imposed sense of constraint that is ultimately undermined as the poem moves forward: “Something there is that doesn’t love a wall / That wants it down.” Frost’s maxim from “Mending Wall” couldn’t be more appropriate to Wingate’s purposes in “The City Dwellers,” as the order of the fence, and the compliance of the trained pigeons, although outwardly celebrated as efforts at containment, are ultimately indicted as absurd artificialities. The spanworms that decimate the speaker’s garden act as a clever thematic counterpoint to the trained pigeons we encounter in the middle of the poem. Emerging from their pupas, they soar over the “pockmarked garden, without / another notice, not for its destruction / or their battered homes, cared nothing for what/they left behind, nor dwelled on what survived.”

The message, then, both in “The City Dwellers” and the collection at large, may well be that we need to reclassify our notions of what home is and means. It seems much less a physical place, and more, simply, where we find ourselves. Wherever we are is merely a vehicle we put to use in the interest of perpetually moving forward. In Homing Instinct, Shoshanna Wingate gracefully communicates a timeless and difficult truth. It’s in the journey that home is found, not in some perceived final destination.