Timothy Taylor, Giller-prize nominated author of Stanley Park, will be reading from his new novel, The Blue Light Project, on Tuesday, November 15th at 8 pm in the Alumni Memorial Lounge. 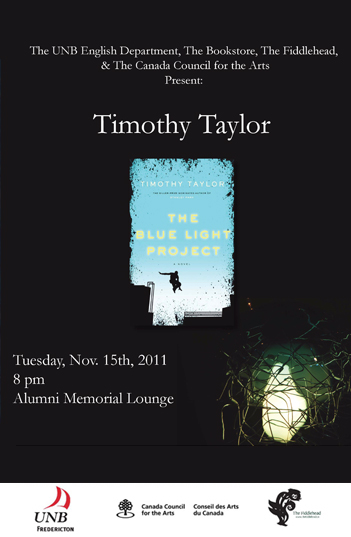 Taylor's new novel, The Blue Light Project, is the story of a hostage taking at a television studio during the filming of a controversial talent show. The only demand of the man armed with explosives  is an interview with a disgraced journalist. As the media circus unfolds, a former olympic gold medalist and a mysterious street artist named Rabbit are drawn into the events that culminate in a dramatic climax that surprises everyone involved.

Timothy Taylor is the author of three novels, including Stanley Park (2001) and Story House (2006), as well as a collection of short-stories, Silent Cruise (2002). Taylor was awarded the Journey Prize in 2000 for his short story "Doves of Townsend," and has been a finalist or runner-up for six other major national fiction prizes in Canada. His non-fiction work has been widely published in magazines and newspapers, including the Wall Street Journal, the National Post, the Vancouver Review, EnRoute Magazine, and a recurring Big Ideas column for the Globe and Mail's Report on Business Magazine.

The reading is presented by the UNB English Department, the Canada Council for the Arts, the UNB Fredericton Bookstore, & The Fiddlehead journal.

Admission is free and all are welcome to attend.
Tags:
stop-look-listen
whats-up