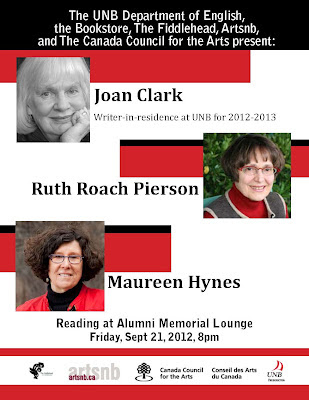 The University of New Brunswick would like to invite you to a literary reading by acclaimed writers Joan Clark, Ruth Roach Pierson, Maureen Hynes. The reading will be held on Friday, Sept 21, 2012 at 8pm in the Alumni Memorial Lounge on the UNB Fredericton Campus.

Joan Clark is writer-in-residence at UNB from September 2012 to April 2013. She is available to the public and to make an appointment contact her at joan.clark@unb.ca or at 506-452-6356. Joan is the multiple-award-winning author of several novels, short story collections for adults and novels for young readers. Her last adult novel, Latitudes of Melt, was nominated for the 2002 International IMPAC Dublin Literary Award, the 2001 Commonwealth Writer’s Prize, Canada-Caribbean, and was a New York Times Notable Book.

Ruth Roach Pierson is a retired academic and award-winning poet. Her poems have appeared in ARC, CV2, Event, The Fiddlehead, The Literary Review of Canada, The Malahat Review, MIX Magazine, Pagitica, Pottersfield Portfolio, Prism International, Queen’s Feminist Review, Quills, and Room of One’s Own as well as a number of anthologies. Her book of poems, Aide-Mémoire (2007), was named a finalist for the 2008 Governor General’s Literary Award for Poetry.

Maureen Hynes is the poetry editor for Our Times magazine and the author of two books of poems. Her work has been shortlisted for the CBC Literary Awards and appears in Best Canadian Poetry 2010. She is a past winner of the Petra Kenney Poetry Award (London, England), and her book, Rough Skin (1995), won the League of Canadian Poets’ Gerald Lampert Award for best first book of poetry.

The reading is presented by the UNB English Department, UNB Faculty of Arts, the Canada Council for the Arts, Arts NB, the UNB Fredericton Bookstore, & The Fiddlehead.
Admission is free and all are welcome to attend.