Poets Anita Lahey and Gerard Beirne will be reading from, and celebrating, their most recent works Tuesday, February 21st, 8 pm at the Alumni Memorial Lounge.

Anita Lahey's second collection of poetry, Spinning Side Kick (Signal Editions), combines emotional honesty and worldly attitude in reflections on love, relationships, and the complications that ensue. Spinning Side Kick explores a range of subjects, from a one-man chimney demolition, and a lover at war in Afghanistan, to the fidelity of seahorses. Lahey's first book, Out to Dry in Cape Breton (Signal Editions), was nominated for the Trillium Book Award for Poetry and the Ottawa Book Award. She has worked as the editor of Arc Poetry Magazine and as a journalist, writing for publications such as The Walrus, Maisonneuve, Canadian Geographic, Quill & Quire, among others.

Gerard Beirne is an Irish author who currently lives and teaches in Fredericton. Beirne's most recent book of poetry, Games of Chance - A Gambler's Manual (Oberon), links his education in mathematics and engineering to his creative endeavours in an effort to uncover a spiritual unity within the arts and sciences.

Games of Chance - A Gambler's Manual plays with the language of science and mathematical formulations to dissolve the expected boundaries of poetry and redefine our understanding of the world that surrounds us. Beirne is the author of both poetry and fiction, and his most recent novel, Turtle (Oberon), was long-listed for the 2010 ReLit Award. His novel, The Eskimo in the Net (Marion Boyars, London) was short-listed for the Kerry Group Irish Fiction Award in 2004 and selected by the Daily Express as Book of the Year. He is the past winner of two Sunday Tribune/Hennessey Literary Awards including New Irish Writer of the Year (1996). Beirne has been widely published and his short story "Sightings of Bono" was adapted for a film featuring Bono (U2).

The reading is presented by the UNB English Department, the Canada Council for the Arts, the UNB Fredericton Bookstore, and The Fiddlehead. 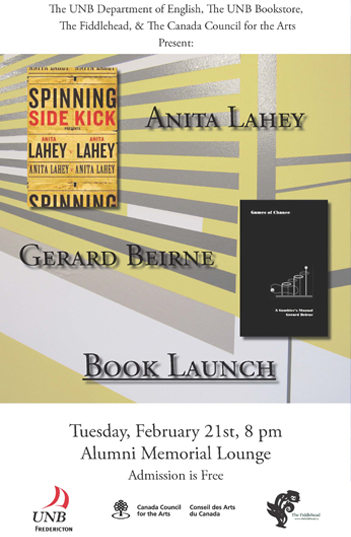