Award-winning playwrights Anna Chatterton, Len Falkenstein, and Colleen Murphy will read from their works on Wednesday, February 28, at 7:30 p.m. in the Alumni Lounge of the Alumni Memorial Building on the University of New Brunswick’s Fredericton campus. The readings launch the book publication of two plays — Lac/Athabasca by Len Falkenstein and Gertrude and Alice by Anna Chatterton and Evalyn Parry — and introduce Colleen Murphy as UNB’s Writer-in-Residence.

Anna Chatterton, a librettist, playwright and performer, was a finalist for the 2017 Governor General’s Literary Award for Drama for her play Within the Glass. Nominated for five Dora Mavor Moore awards, she won the 2017 Dora award for Outstanding Opera Production. Her solo play Quiver was produced by Nightwood Theatre, where she is currently Playwright-in-Residence. Anna has co-written and created six plays with feminist theatre company Independent Aunties, including the multi-Dora-nominated Gertrude and Alice, about Gertrude Stein and her partner, Alice B. Toklas.

Len Falkenstein is the Director of Drama at the University of New Brunswick in Fredericton, where he teaches theatre and playwriting and directs productions for Theatre UNB. He is also Artistic Director of Bard in the Barracks, Fredericton’s outdoor Shakespeare company, and NotaBle Acts Theatre Company, which stages new plays by New Brunswick dramatists. His plays include Soft Target, Utopia, Doppelgänger, and Free/Fall, and have been staged across Canada by his company Theatre Free Radical. Lac/Athabasca, written in response to the Lac-Mégantic rail disaster, won second prize in the 2015 Herman Voaden Playwriting Competition.

Colleen Murphy is a two-time Governor General’s Literary Award Winner for Drama. In 2016 she won for her play Pig Girl, and in 2007, for The December Man (L’homme de décembre). In 2017, she had four world premieres including The Breathing Hole at the Stratford Festival and the opera Oksana G. in Toronto. Colleen is also an award-winning filmmaker whose films have played in festivals around the world. Colleen has been the Writer-in-Residence at Finborough Theatre in London, U.K.; Necessary Angel Theatre and Factory Theatre in Toronto; and several Canadian universities. She is currently Writer-in-Residence at UNB.

The reading, sponsored the UNB Department of English, the Playwrights Guild of Canada, and Playwrights Canada Press, is free and open to the public. 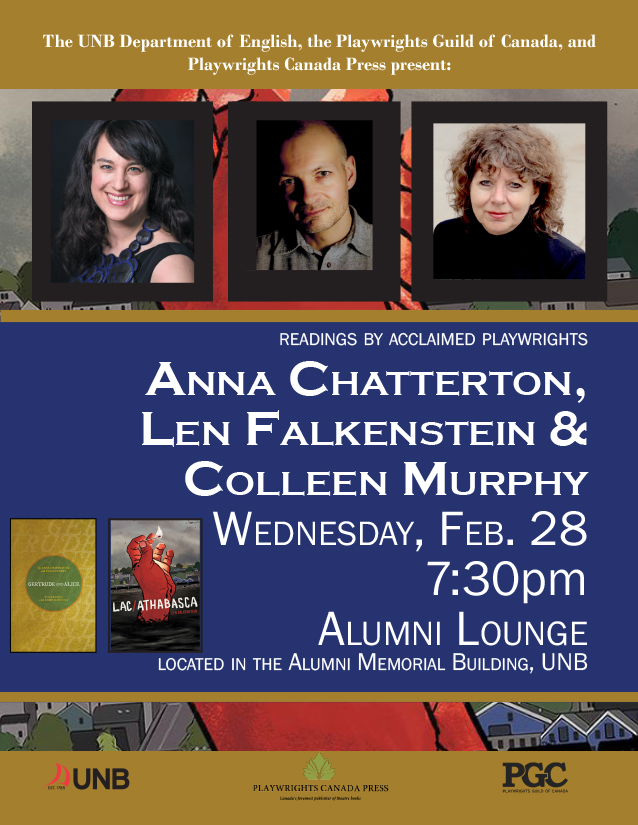