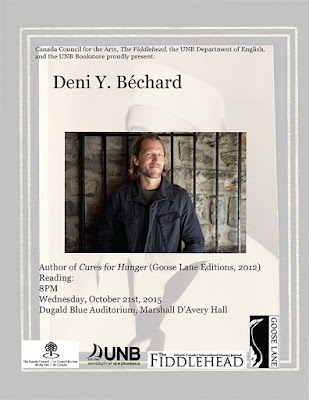 The University of New Brunswick would like to invite you to a reading by Deni Béchard on Wednesday, October 21st at 8PM in the Dugald Blue Auditorium in Marshall d’Avray Hall on the Fredericton campus.

Deni Béchard is the author of Vandal Love, which won the Commonwealth Writers’ Prize, was selected for Oprah’s Book Club’s summer reading list and been translated into French, Arabic, and Russian; Cures for Hunger, a memoir about growing up with his father who robs banks, and an IndieNext pick and Amazon.ca editor’s pick for best memoir/biography in 2012. He has traveled in more than sixty countries and reported from India, Rwanda, the Congo, Afghanistan, and Northern Iraq. He was written for the LA Times, Outside, Foreign Policy, Salon, Maisonneuve and The Harvard Review.