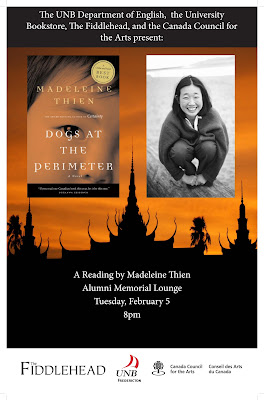 Madeleine Thien will read from her new novel, Dogs at the Perimeter. Thien is the author of two previous works of fiction, Simple Recipes (2001), a collection of short stories, and Certainty (2006), a novel. She has received the City of Vancouver Book Award, the Ethel Wilson Fiction Prize, and the Ovid Festival Prize, and her fiction and essays have been featured in Granta, The Walrus, and Brick. Thien lives in Montreal.

Johanna Skibsrud, winner of the Scotiabank Giller Prize, says this about Dogs at the Perimeter: "If you read one Canadian book this year, let it be this one."

Contributor to The Fiddlehead no. 254 Tamas Dobozy was recently interviewed by Shelagh Rogers on her CBC program The Next Chapter. You can listen to the podcast here.