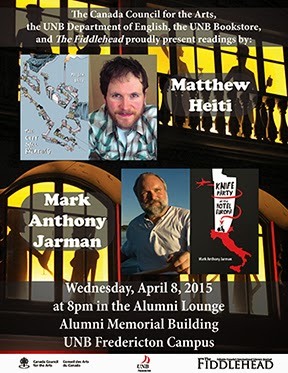 The University of New Brunswick would like to invite you to hear readings by acclaimed writers, Matthew Heiti and Mark Anthony Jarman.

In Matthew Heiti’s The City Still Breathing, published by Coach House in 2013, a dead body found on the side of Highway 17 outside Sudbury undergoes a strange odyssey, making its way all around the northern Ontario town and through the lives of eleven very different people. All of them are hoping for something more out of this dying town. All they find instead is one another, in a strange and apocalyptic moment of violence.

Heiti’s fiction has appeared in many periodicals and journals, and his plays have been workshopped and produced across the country. As cowriter with Ryan Ward of the film Son of the Sunshine, he was a Genie Award nominee for Best Original Screenplay at the 32nd Genie Awards in 2012.

In Knife Party at the Hotel Europa, published this year by Goose Lane, Mark Anthony Jarman writes about losing and finding love, marriage and melancholy, the dislocation and redemptive power of travel in Italy’s sensual summer. Through the acute loneliness of one who has abandoned and been abandoned a man finds how beautiful this life can be. In vivid, sensuous prose, Jarman’s stories circle and overlap in surprising, weird, and wonderful ways. Tangents turn out to be crucial, allusions are powerful.

Jarman has been shortlisted for the O. Henry Prize and has won the Gold National Magazine Award in nonfiction, the Maclean-Hunter Endowment Award (twice), and the Jack Hodgins Fiction Prize. His novel Salvage King Ya! Is on Amazon.ca’s 50 Essential Canadian Books. He has published in The Walrus, Canadian Geographic, Hobart, The Barcelona Review, Vrig Nederland, and The Globe and Mail.

Their readings will be held on Wednesday, April 8th at 8:00 pm in the Alumni Lounge of the Alumni Memorial Building on the UNB Fredericton Campus. Admission is free and all are welcome to attend.