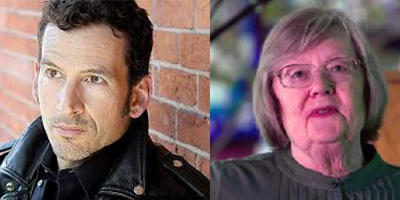 Writers Steven Heighton and Nancy Bauer will read from their work on Wednesday, February 14, 2018, at 7:30pm in the Alumni Lounge of the Alumni Memorial Building at UNB Fredericton.

Steven Heighton is an internationally acclaimed, award-winning novelist, short story writer, poet, and essayist. His most recent work, the 2017 novel entitled The Nightingale Won't Let You Sleep, tells the story of a veteran recovering in Cyprus after his time in Afghanistan, his tragic love affair with a Turkish journalist, and time spent in a community of exiles and refugees living in the abandoned remains of a Greek-Cypriot resort town. In 2016, Heighton won the Governor General's Award for Poetry for his collection The Waking Comes Late. Afterlands, his 2005 novel, was a New York Times Book Review Editors' Choice, and was a “best of year” selection in ten publications in Canada, the USA, and the UK.  His other works include the novel The Shadow Boxer; short story collections Flight Paths of the Emperor and On earth as it is; and, poetry collections The Ecstasy of Skeptics and The Address Book.

For more than 50 years, Nancy Bauer has been a leading voice in the New Brunswick literary community. Goose Lane Editions and Oberon Press published five of her novels.  She has written dozens of articles for Arts Atlantic, The New Brunswick Reader, and other magazines and wrote a weekly column on the arts for the Telegraph-Journal for eleven years. One of her short stories won a CBC literary award and she is also a recipient of the Alden Nowlan Excellence award. One of the founders of the New Brunswick Chapbooks, the Maritime Writers’ Workshop, the Writers’ Federation of New Brunswick, Gallery Connexion, and Word Feast, Nancy Bauer has also been the writer-in-residence at UNB.

The reading, sponsored by the Canada Council for the Arts, the UNB Department of English, the UNB Bookstore, and The Fiddlehead, is free and open to the public. 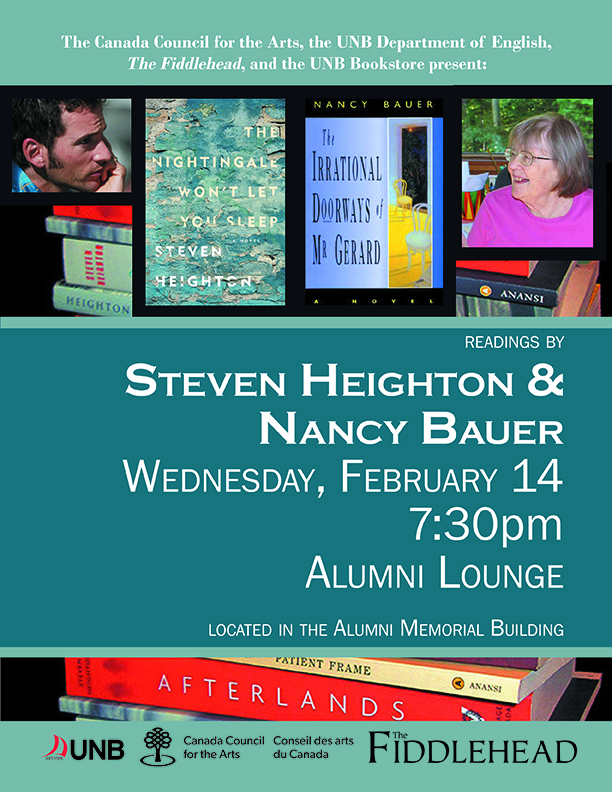