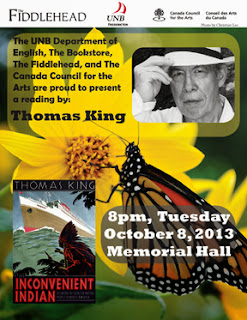 The University of New Brunswick would like to invite you to hear a reading by the critically acclaimed writer, Thomas King, author of The Inconvenient Indian published in 2012 by Random House of Canada. Rich with dark and light, pain and magic, this book weaves the curiously circular tale of the relationship between non-Natives and Natives in the centuries since the two first encountered each other. In the process, King refashions old stories about historical events and figures, takes a sideways look at film and pop culture, relates his own complex experiences with activism, and articulates a deep and revolutionary understanding of the cumulative effects of ever-shifting laws and treaties on Native peoples and lands.

Thomas King is also the author of One Good Story, That One, Truth and Bright Water, and A Short History of Indians in Canada, which won the 2006 McNally Robinson Aboriginal Book of the Year Award. King’s A Coyote Columbus Story was nominated for the Governor General’s Award in 1992, and his Green Grass, Running Water was nominated the following year, and later chosen for inclusion in Canada Reads 2004. King is also known for his work writing and performing on the CBC radio show “Dead Dog Café.” In 2004 he was made a Member of the Order of Canada.

His reading will be held on Tuesday, October 8 at 8:00 pm in Memorial Hall on the UNB Fredericton Campus. This event is free and open to the public. We suggest coming early, as seats may fill up fast.