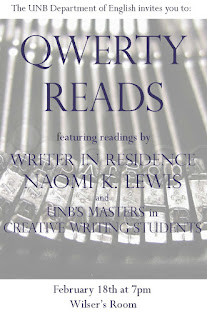 Qwerty Reads is a monthly reading series hosted by Qwerty Magazine and aims to promote the magazine and the local arts scene in general. Each event features a different headline reader - sometimes it's a writer coming through town promoting a new book, sometimes it's a member of the UNB community. 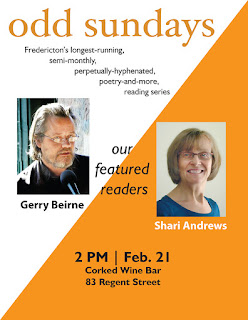 Gerard Beirne is an Irish writer. His collection of short stories, In A Time Of Drought And Hunger, has just been released by Oberon Press. He is a past recipient of The Sunday Tribune/Hennessy New Irish Writer of the Year Award. His novel The Eskimo in the Net (Marion Boyars Publishers, London) was short-listed for The Kerry Group Irish Fiction Award 2004.

Shari Andrews’ recently launched her sixth collection of poetry First Thin Light. In this her fifth book from Oberon Press, Shari "considers the bonds that tie the present to the past in terms of what it means to be female, and the influences both obvious and subtle that have gathered to define her."

As always the opening part of the afternoon with our featured readers will be followed by a short break. Then comes the open mic session and our now-becoming-famous book draw to close out the afternoon. 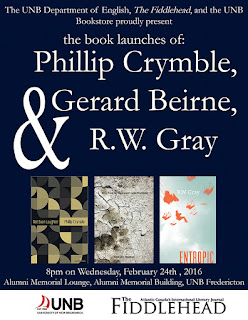 The UNB Department of English, The Fiddlehead, and the UNB Bookstore are pleased to invite you to the book launches of Phillip Crymble, Gerard Beirne, and R.W. Gray. The event will take place at 8 pm on Wednesday, February 24th, 2016, at the Alumni Lounge, in the Alumni Memorial Building, on the UNB Fredericton campus.

Phillip Crymble's first full-length collection, Not Even Laughter, explores the work and sensibilities of those whose ideas and visions have been long overlooked. The technical acumen, ear for music, and emotional sincerity unite the eclectic subject matter in this literary debut.

Set in a Cree community in northern Manitoba, Gerard Beirne’s short story collection In a Time of Drought and Hunger draws on Beirne’s family experiences as Irish immigrants. This book has been a long time in the making, and the disaffected people who fill its pages have moved everyone who has read it.

Beirne completed an MFA in Creative Writing at Eastern Washington University and now lives in Fredericton, NB. He is the author of three novels and two collections of poems.

In his second collection of stories, Entropic, Canadian author and filmmaker R.W. Gray once again finds the place where the beautiful, the strange, and the surreal all meet--sometimes meshing harmoniously, sometimes colliding with terrible violence, launching his characters into a redefined reality.

Gray was born and raised on the northwest coast of BC, and received a PhD in literature from the University of Alberta. He is an active writer who has had ten short screenplays produced. He is a senior editor of the web magazine Numéro Cinq, and he teaches at the University of New Brunswick.