What is Dustin Hoffman listening to? 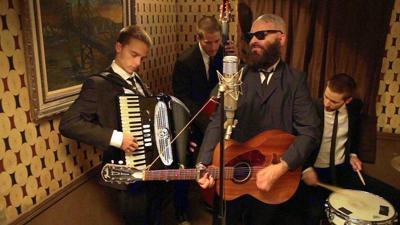 The racing-tempo angst of punk rock has lost some appeal over the last decade to this almost-forty punk. I’m too tired to mosh and pogo maybe. I’ve lost too much hair to sport a mohawk. But Tim Timebomb scratches an itch of my more mature punk sensibilities.

I was a teen in the ‘90s, and Rancid was my first serious punk-rock obsession. The group’s lead singer and songwriter, Tim Armstrong, released around 200 songs in a solo project named Tim Timebomb from 2012-2014, and this giant album just gets me perfectly. It’s punk rock gone acoustic, gone folk, gone reggae, gone zydeco. It helps make the inevitable doom of aging less lonely to know your hero is maturing with you.

What made me fall in love with Rancid was Tim Armstrong’s voice. Like Cobain, like Elvis Costello, like Tom Waits, like Joe Strummer, Tim sings like he’s on fire, like he’s sang his vocal cords raw. I love singers who garble grit in their throats, who know how scream beautifully. It’s a quality of rawness and strain I’ve always wanted to translate to my own prose style. Anyway, Tim’s voice is one of the grittiest. Really, I could listen to Tim read me the dictionary (actually, that sounds fantastic and he should do it!).

So, the 200 songs are a lot to wade through, though I recommend them all. You can find them on Tim Timebomb’s YouTube channel, and these are on all the other streaming services. But let me guide you through a few of my favorites to highlight some of these gems:

“Thirty Pieces of Silver”—Tim doing one of the things he does best: rootsy ska you can dance to.
“She’s Drunk All the Time”—I guess this was written by Green Day guys, but I promise it’s a million times more interesting than pop punk in Tim’s style.
“Adalida”—a lovely zydeco cover.
“It’s Quite Alright”—a Rancid cover, for the other aging punks—with a glockenspiel, mandolin, and a surprisingly satisfying harmonica (harmonica’s usually sound like nails on chalkboard to me).
“Yes, Sir”—a vaudevillian cover of an early American pop song with a brass band.
“Jim Dandy”—a ‘50s R&B cover of a song by Lavern Baker and the Gliders.
“You’re a Mean One Mr. Grinch”—I mean, come on! I hope you’re all listening to this version when Christmas rolls around this year.
“Crawdad Hole”—a working-class Southern folk song with banjo.
“Working”—Here’s a great ska rendition of a song by a ‘70s British band called Cock Sparrer.
“Little Sadie”—another folk cover of a classic. I love it more because I had a beloved dog named Sadie who just died.
“Dope Sick Girl”—Here’s another Rancid cover that just gets better acoustic.
“Jockey Full of Bourbon”—Can Tim cover Tom Waits? Yep. He can do that, too.
“Just for Tonight”—a reggae jam with a freaking flute, also a charming back-and-forth duet with Bevin Hamilton.
“Timebomb”—another Rancid classic covered in a hauntingly folksy style.

Dustin M. Hoffman is the author of the story collections One-Hundred-Knuckled Fist (winner of the 2015 Prairie Schooner Book Prize) and No Good for Digging (Word West Press). He painted houses for ten years in Michigan and now teaches creative writing at Winthrop University in South Carolina. Hoffman's short fiction A Sky So Sharp was published in issue no. 285 of The Fiddlehead.