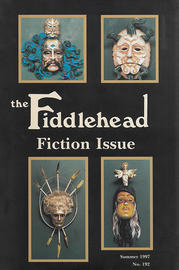 In 1997, the advancement of technology was well underway. In the publishing community, there developed a fear of the decreasing demand for physical works of literature. The invention of the eBook was forecasted as the cause of death of the physical book. However, as we now know, that prediction never came true. I think many of us agree that reading a physical copy of a book is an experience that technology could never replace. Editor Bill Gaston predicted this outcome in the issue’s editorial, stating that this issue was published partially in response “to the ‘death of the book’ bleats from those tech mongers who are under the delusion that settling into or on our favorite chair, tub or beach with a book such as this somehow lost its appeal.” Although technology offers more convenient ways of consuming literature, nothing could replace the weight of a book between our hands and all the possibilities that it holds. And this all-fiction issue is among the largest published yet by The Fiddlehead, made to fit the bulging creative minds of our contributors and their stories.

In the editorial, Bill Gaston proudly states “that there’s no country in the world better than we are at telling stories.” The issue offers a diverse symphony of writers. The Fiddlehead routinely includes established writers as well as newcomers and this issue is no different. Former UNB writer-in-residence and writer and filmmaker Kenneth J. Harvey is featured in the issue with his story, “Idling Car As Seen Through Fog.” Other contributors include Michael Crummey, Elisabeth Harvor, Alexander McLeod, and Michael Pacey. Holding this fiction issue in your hands reminds you of the weight a physical book holds for readers and writers in the literary community.