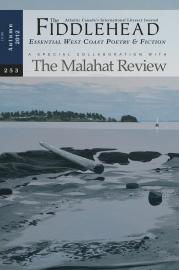 Home is where the heart is, but heart is often tied to a place where fond memories are created. Ross Leckie, editor of The Fiddlehead at the time, reveals the importance of place in the editorial opening of the West Coast issue: “writers in Canada think deeply about how we imagine home, environment, place and space.” He emphasizes how place, although not always important to readers, is often important to writers. It is a part of a writer’s identity and often, consciously, or unconsciously, seeps into their writing. The Fiddlehead and The Malahat Review, founded on opposite coasts, are two widely renowned Canadian literary magazines. In Autumn 2012, they collaborated on a project focusing on Canadian writers. This issue of The Fiddlehead displays West Coast writing at its finest, just as the twin issue of The Malahat Review presents the best of East Coast writers. The goal of this collaboration was to give subscribers of The Fiddlehead the opportunity to experience West Coast writing, creating a diverse collection found in one space. It allows readers to learn more about the communities and locations, doing so through the eyes of those who’ve lived there.

The issue features prominent West Coast writers. George Bowering, Canada’s first parliamentary poet, contemplates the progression of the world and death in two short poems. Canada’s proud unofficial national sport is referenced in “Birdwatching During the Playoffs” by Bren Simmers and “Geoffrey Hill at Duck Mountain” by Tim Lilburn. At the time, Bren Simmers worked as a park interpreter in Vancouver and was awarded the Arc Poem of the Year Award, and Tim Lilburn was a professor at the University of Victoria and had written a book entitled Assiniboia. Vanessa Li, born and raised in Vancouver, was in the process of publishing a memoir on her “wickedly outrageous Chinese family” at the time the issue was published. She highlights a local spot in BC in her short story “Wreck Beach,” shifting from the description of place to plot and bridging the gap between both.

The cover is an acrylic painting painted by west coast artist Nathan Birch. He was born in the US but moved to Canada early on in his life. He has devoted much of his artwork to landscape paintings, illustrating different places he’s lived. This specific painting depicts Drumbeg Park, located on Gabriola Island in British Columbia. Birch captures one of the many beautifully preserved landscapes that can be visited on the west coast.