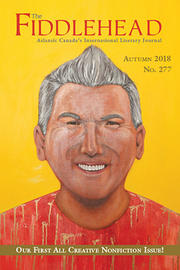 Introduction
5      Alicia Elliott: Whatever We Need It To Be

The painting featured on this cover was unveiled during Pride Week in Frederiction (August 10-18, 2018) as part of the Pride Heroes Portrait Project, a project with three main concepts: honour, inspiration, and education. The paintings — six in total featuring local pride heroes — were put up for sale with part of the proceeds going to Rainbow Railroad, a Toronto-based organization that works to help save LGBTQ2+ refugees from state-sanctioned violence across the world.

Chief Allan Polchies Jr., of St. Mary’s First Nation, has risen in the community as a leader as the first two-spirit Chief in Atlantic Canada.