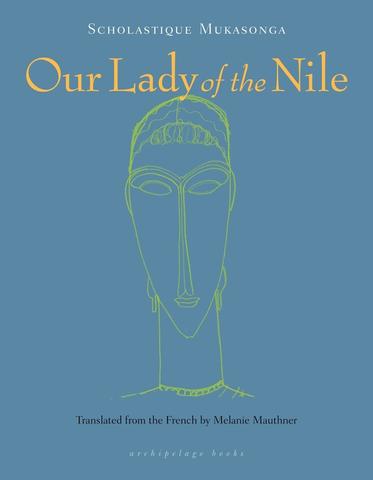 Recently, I read Scholastique Mukasonga’s novel Our Lady of the Nile (Archipelago Books, 2014). Set in a Catholic lycée for elite young women in Rwanda in the 1980s and told in a lyrical style, the novel develops an atmosphere of dread for the genocide to come while shedding light on the legacy of colonialism.

The Lady of the Nile is a statue of a Black Virgin Mary that had been installed on the ridge of the Nile with great fanfare and with representatives from the King of Belgium in attendance; the school makes a pilgrimage to it once a year. An old French coffee plantation owner who lives nearby believes the statue is really the Egyptian goddess Isis. Gloriosa, a senior at the lycéé, a child of a politician, and a bully, calls into question whether the statue isn’t just a White Mary that has been painted and criticizes its small nose, then calls it a Tutsi nose, not a “real Rwandan” or Hutu nose.

Gloriosa is cruel to other students. She wields her father’s power over her classmates, especially the small population who are Tutsi or half-Tutsi (there is a Tutsi quota), and then school administrators, with ease, leading up to an explosion of horrific violence.

When Gloriosa is first introduced, I could not help but remember the scene from Schindler’s List, implanted in my memory since I first saw that film at age 11 with my grandparents, who survived the Holocaust, of a child gleefully shouting at a column of Jews being deported to death camps, “Goodbye, Jews!” Our Lady of the Nile offers visceral insight into the conditions leading up to mass atrocities and is an intimate reminder of the necessity of keeping our eyes open and remaining vigilant. As one character remarks: “Those who believe in quiet times, the lightning will catch them.”

Anca L. Szilágyi is the author of Daughters of the Air, which Shelf Awareness called “a striking debut from a writer to watch.” Her second novel, Dreams under Glass, releases in Fall 2022. Her story "Boiled Boot" was published in the Spring 2022 issue of The Fiddlehead. Originally from Brooklyn, she has lived in Montreal, Seattle, and now Chicago. ancawrites.com.