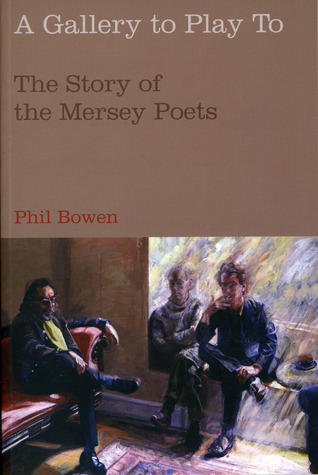 Phil Bowen’s A Gallery to Play To: The Story of the Mersey Poets (Liverpool University Press, rev. 2nd ed., 2008).

Reading restarted as abruptly as it had stopped. I had talked myself out of getting over-invested in possible outcomes, armed myself with cautionary tales, but now there was no denying it – after more than two years without books, I could not only read the print on the page with startling clarity but it didn’t disappear when I looked away and then back again. All thoughts of an orderly return to the reading life were forgotten. A starving man doesn’t leaf patiently through recipes before settling on the most promising. All the books that friends had lent me, all the lists of must-read titles – everything went out the window as I threw myself greedily on the first thing that came to hand.

It happened to be a book I had picked up in a used bookstore, A Gallery to Play To: The Story of the Mersey Poets by Phil Bowen. It’s an easy read, chatty and gossipy and, despite coming from a university press, journalistic in tone rather than academic. If you don’t know their poetry, it’s an excellent way to form a quick idea of what the Mersey Poets – Adrian Henri, Roger McGough, and Brian Patten – were about (though no substitute for the 1967 Penguin Modern Poets collection, The Mersey Sound, that featured their early work and turned the British poetry world upside down by going on to sell more than 500,000 copies, putting a number of establishment noses out of joint in the process). You will come away with a taste of McGough’s wry humour, which found musical expression with the Scaffold, a group formed with John Gorman and Paul McCartney’s bother, Mike McGear; of Henri’s performative anarchy, which spilled over into his band, the Liverpool Scene; of Patten’s more solitary and focused aesthetic, which turned its back on musical sideshows in favour of an incantatory reading style that brought out the rhythms of the poetry itself. Most of all, you will discover a poetry that goes a long way toward realizing that old dream of the avant-garde – the abolition of the distance separating art from daily life. The everyday ordinariness of the subject matter combines with an irreverent sense of humour and a commitment to the speaking voice to introduce a breath of fresh air into the halls of high culture. These are poems that belong in the lived-in spaces of daily life, not in the hushed rooms of the art museum and library of the period.

If you do know their work, Bowen’s book is still worth a read for its insights into the relationship between popular poetry and the kind of milieu in which it can emerge and flourish. As an overview of what late-sixties Liverpool (“the centre of the consciousness of the human universe” in Allen Ginsberg’s extravagant phrase) was like – the club scene, the pubs, the coffee houses, the chaotic, youthful exuberance of it all – it’s strong enough on the personalities and their interconnections to whet my appetite, but without delivering enough detail to satisfy my hunger. I want to know more about the actual readings and performances, about audience reaction, about how exactly the poetry worked in conjunction with the vibrant music scene – not just pop but jazz and skiffle, too. I’m left wanting more substantial fare, along the lines of Roger Shattuck’s classic account of Belle Époque Paris, The Banquet Years, which brings to shimmering life the avant-garde milieu of Apollinaire, Jarry, Satie, and Henri Rousseau, which was so important for the Mersey Poets, particularly Adrian Henri. (An enthusiastic vocalist and as good a painter as a poet, Henri’s hero was Jarry’s Ubu.) But this is asking a lot, and Bowen delivers a more than readable book as it is.

Two years without reading and now I’m rediscovering one of the most invaluable things books can do for us, which is open doors into other worlds. Call it escapism if you will – though to my mind that misses the point – but I can’t think of many times when we have needed books more.

Anthony Purdy lives on the South Shore of Nova Scotia, where he started writing in 2019. Recent publications include stories in the Spring and Summer 2020 issues of Queen’s Quarterly as well as poems in The Goose, Prairie Fire, The Dalhousie Review, and Queen’s Quarterly. He is a member of the Writers’ Federation of Nova Scotia and an Associate Member of the League of Canadian Poets. His poem, “mornings,” received an honourable mention in the League of Canadian Poets’ 2021 Very Short Verse contest and appeared in the May 21 edition of Poetry Pause. His poem, “bakery,” was shortlisted for the Writers’ Federation of Nova Scotia Spring 2021 Postcard Poem contest. Literary writing offers him new ways of exploring some of the concerns and questions that animated his research and teaching in recent years in fields as various as nephology and meteorology; natural history and the environment; material culture and the museum; cultures of memory and the archive; the archaeological imagination. You can read his poem, The subtle tumour in issue no. 286 of The Fiddlehead.