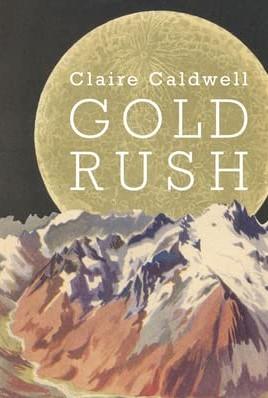 Over the centuries, the word “frontier” has meant the border of a country, the front line of an army, and in North America, the mostly uninhabited country at the far edge of settled areas. In Claire Caldwell’s second collection of poems, Gold Rush, she examines the idea of public and private frontiers through a mix of voices including actresses on the Chilkoot Trail, a mountain climber missing the good old days of Mount Everest, a hedgehog conservation officer, a traveller on the Juno spacecraft, and the patron saint of floundering homesteads. She is also a forager, deftly using phrases from other sources to enrich her stanzas and stretch her lines.

Some of the poems elaborate on her teenage years and on her time spent growing up out of doors. In “Girls Gone Wild,” she describes nine girls swimming at the end of a long day of paddling. While air-drying on rocks, they sneak glances or try not to look at each other. Caldwell inserts italicized phrases between the couplets, the phrases taken from three plant guides acknowledged in her back notes.

I want to stop growing
pear-shaped, fleshy hips
and this makes me ashamed.
At fifteen, I don’t yet know the difference

Nature has reproductive intent, expressed in the hips or fruit of a wild rose and in the rounding hips of a girl. Nature wants to continue itself, and the girl is part of that energy, whether she likes it or not. Growing up is accepting, even celebrating, that transition both important and wild. Although that change is decades behind me, Caldwell’s words took me right back to the feeling of a body charging ahead with its own agenda, crossing a border, pulling me into the adult world.

Caldwell’s imagery injects the poems with freshness and presence. In the list poem, “Sounds a River Makes,” we hear “bear clicking its teeth” which I equate with shallow water rattling over stones or dislodging thin ice. Then four lines down we hear “Grandmothers/ stuffing envelopes in a high school gym,” surely the shush and murmur of deeper water curling around substantial rocks. The final line is “A children’s choir after one kid/ faints, before the rest start to sing.” Really? I had to put the book down and think about this; the child dropping in the silence, the collective gasp and shuffling of the children around the dropped one, and then the rest begin to sing. I remembered a hike into a waterfall how the water seems to poise for a milli-second at the lip of a ledge, how protruding rocks direct the fall and sound of water, and how it resumes its full-volume in the pool below. I admire the ingenuity in this weave of outdoor particulars and moments of human dailiness. Is she suggesting that we share more with the natural world than we think we do?

In the book’s first section, eleven spare poems constitute the sequence “Frontier Diaries.” These erasure poems use as source material excerpts from the diaries and blogs of seven homesteading women in the years 1867 to 2016. The speaking voice is the “I” of one woman, sometimes slipping into “we,” as she elaborates on the severity of frontier life. Their men warm up gradually and hardships advance like mountains. She says in Shelter “Cold will eclipse us.” The house is encircled by bleak fog and the woods seem to reach all the way to England. Beauty is present, rest is scanty, and bread is made regularly. In Commitment she says, “Dread rose,/ became energy.” Punching the bread dough down is an opportunity to fight back at the sacrifice, daily work, and loss of freedom.

She melds the seven different voices from her source material into one tough, honest, long-suffering, sometimes wistful voice. The diaries of Susanna Moodie and Anne Langton are included of course, and also the blogs of contemporary homesteaders Ree Drummond and Erin Harrason who, frankly, don’t seem to be living on the keen edge of getting by as does the speaker in the poem.

This sequence would’ve worked better for me if the original blocked-out texts had been included. Where the lines come from, the blocked-out text of their origins, is part of the energy and conversation, even argument, of erasure. That context is absent, and I wondered if the lines were pulled from a paragraph or gathered here and there from pages or screens of text, making this more of a foraging sequence versus an erasure piece.

In the last section of the book, Caldwell includes some unsettling poems about the natural world, how we’ve screwed it up big-time, and hence, our future on this planet. In the poem “Pastoral” she says,

In the last years of birds,
the sky will fur up
like bread mould.

When the mountains shake
their manes, we’ll say
the continent betrayed us.

What happened was this:
whitecaps, whitecaps,
seven billion human beings.

She moves through succinct images of chest X-rays, salad spinners, and barren supermarkets, to arrive at the apocalyptic furry sky and thundery mountains. People will feel betrayed by the landscape, but she summarizes the cause of breakdown as white-caps of human beings, centuries of whitecaps, the perfect tsunami of too many people.

In other poems she is clear about how complicated people can be. In “Last Night on Earth,” we encounter the last Bramble Cay Melomy, a rodent once endemic to the Great Barrier Reef. It wonders why the sand has disappeared, notices the ocean is “a tail’s length/ closer.” Then it spots turtles swimming with “strips of land/ in their teeth.” This creature disappeared because of rising sea levels, severe tropical storms, and political indifference. Maybe the creatures weren’t cute enough to engage the concern of the public?

But the speaker in “For the Toronto Zoo Elephants” is puzzled as to why the elephants could possibly be better off in sunny California. “Wasn’t the moon the elephant’s footprint?” she asks. “Didn’t we give their babies names?” Ski hills were groomed until they were solid as ivory and skiers learned to angle their poles up like tusks. Clearly, the speaker has a soft spot for this penned-in exotic creature from a different climate, but how out of touch is the speaker with wildness and what the elephants truly need? In Caldwell’s poems, the strength and creativity of human beings is ever so present but too often misdirected.

As I read Gold Rush, I had to look up Enceladus, Fitbit, Bramble Cay Melomys, thirst traps, and penis worms as well as contemporary bloggers. There is something in Caldwell’s candour, verbal energy, and her roving eye for material that made me smile often, that reinforced my hope in language and the peculiar clarity of poetry. After all, we have arrived at a new frontier of changing climate and its fallout. There were many opportunities for ranting or wielding a didactic sword, but Caldwell always let her wit, plus the imagery and connections of poetry do their wonderful work.