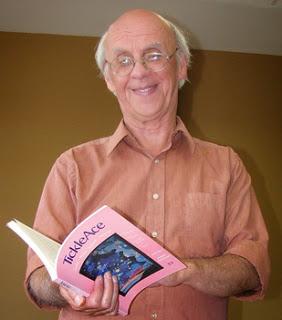 Despite the multitude of successful Newfoundland poets to choose from, Mark Callanan and James Langer’s inclusion of Tom Dawe into Breakwater’s Contemporary Newfoundland Poetry Anthology may indeed have been a no-brainer. Dawe hails from the southern region of Conception Bay, Newfoundland and is a founding member of the Breakwater Books publishing house. In 2011, he was made a Member of the Order of Canada.

In his poem “Wild Geese,” Dawe writes a confessional poem about watching two geese fly. While not explicitly stating the poem’s location, Dawe insinuates the poem’s Newfoundland location by situating the speaker on “mounds of turf / warm above wave-lit / over mossy stones.” After the setting is established, Dawe creates a link between the past and the present, juxtaposing his childhood time in this location with his current situation. He forms this link through (you guessed it) observing the flight of a pair of geese. Dawe puts tension between wanting to leave a place and yet being held to it, wanting to move on and yet wanting to stay the same. In this sense, Dawe’s poem functions as a microcosm for the grander march of Newfoundland poetry, of being pulled between history and the future.

Richard Kemick is a currently an MA (Creative Writing) student at the University of New Brunswick. He recently won Grain's Short Grain Prize for Poetry.

Permalink Submitted by iletourn on Wed, 04/27/2016 - 12:42
I'm not entirely sure about any of this. Perhaps, Richard, you can explain what you mean when you allude to Newfoundland poetry's "folkloric roots." What exactly is "folkloric" about our poetic roots? Was EJ Pratt folkloric? I find that to be a judgement based on cultural assumption more than on actual reading. I certainly don't find Dawe's poetry folkloric. His debt to Frost, which is clearly on display in the anthology, should act as some kind of warning against such terms as Frost's early critics viewed him as a "folkloric" poet, a purveyor of New England county-bumpkin folk wisdom. Of course, we all now know how wrong they were. Frost was one of the most complex, intelligent, and universal poets of his generation. I find Dawe's response to Frost resembles, in some ways, Seamus Heaney's response. But we only ever talk about Heaney, especially the early and middle work, as "mythic" which seems, at least, to lend it a universal quality, a quality that I think certainly applies to Dawe, whether mainland Canada gets it or not. And what do you mean when you suggest that the "acclaim" achieved by others has drawn Newfoundland writers away from their roots? I'm not sure I see that as a valid statement at all, nor do I like what it implies.Are we really being drawn away from our roots with the prospect of fame and fortune and a handful of good reviews? You are, though, right about one thing. Tom Dawe's inclusion in this anthology was indeed a no-brainer. He read at the anthology's launch here in St. John's. In that dark barroom, it was as if we the audience became the event horizon around his gravitational performance. It was amazing. It was mythic. — James Langer

Permalink Submitted by iletourn on Wed, 04/27/2016 - 12:40
James, Thank you for your response. I apologize if, in my short entry on Tom Dawe, I seem to be romanticizing or sentimentalizing Newfoundland by the use of the term “folkloric.” I do not mean folkloric as a pejorative term, but rather an expression of the process of invoking the history, landscape, legends and customs of a certain place. In your response, you prefer the term “mythic,” as you say that word lends a “universal quality.” I did not use that term, as I am not sure how myth implies a “universal quality.” For example, creation myths are only universal in that many exist. It is not their labels as myth that makes them universal. Genesis belongs to Christian myth, but it is his hardly universal. Is Galland’s Aladdin mythic or folkloric? What about Ondaatje’s In The Skin of a Lion? I’m not sure the distinction matters. These stories root their narratives in local legend and custom, and then project themselves into larger themes. I think Dawe’s poetry does the same thing. You seem to think that a folk poet equals a simpleton (a “county-bumpkin” is the term you use). I disagree. I do not think Langston Hughes or Mo Yan pigeon-holed their careers when they referred to themselves as folk artists. Yes, Frost is a complex poet, but he does draw on the legends and customs of rural New Hampshire. I take your point that my statement arguing that it is national acclaim that has caused many Newfoundland writers to shift focus away from their home province. In your response, however, you also misrepresent my point. I did not say that more recent Newfoundland writers are writing further “away from their roots,” but rather from their folkloric roots. In the anthology’s later section, there isn’t the same focus on Newfoundland or the province’s outport communities as there is in the beginning. Breakwater’s anthology begins with poems that either directly make reference or strongly suggest a Newfoundland setting. In this anthology, Dawe’s poems do both. Al Pitman’s work, the only poet to come before Dawe in the anthology, does this as well. This emphasis on setting, however, is reduced as the anthology continues, until we reach writers such as Ken Babstock, who was raised and began writing in the Ottawa Valley, now lives in Toronto, and whose work doesn’t reveal the same focus on Newfoundland as the anthology’s first two authors. When I write about the Calgary Stampede, I do not become more of a Calgarian than when I do not write about it. I do not believe that Newfoundland poetry becomes less authentic if it is not about Newfoundland. The setting of a poem does not indicate anything other than what an author wants to write about. That being said, I think that this anthology demonstrates a shift from the centripetal to the centrifugal in contemporary Newfoundland poetry, a shift that is noteworthy. Richard Kemick

That does clarify some things. But . . .

Permalink Submitted by iletourn on Wed, 04/27/2016 - 12:44
Thanks, Richard. That does clarify some things. It also means that all poetry has folkloric roots, regardless of region. In fact, given the definition you provide — history, landscape, legends and customs — it means that every single poem is rooted in folklore somehow. So the poetry of Newfoundland, past or present, is no more or less folkloric or rooted in folklore than the poetry of any other time or place. It's so similar, actually, it's hardly worth mentioning. It's about the equivalent of saying, "This poem is a poem." Is our present poetry less rooted in "Newfoundland" folklore? Only if Newfoundland folklore became static somewhere along the way. Which it didn't. The place has changed and will continue to change. We have cable tv now and, as it is for everyone, travelling is easier and faster. And my generation of poets--Babstock, Sinclair, etc.--are representative of the migratory patterns that followed confederation with Canada, and these migratory patterns are now the subject of daily conversation, songs, customs, and even legends. The poetry of our past is no more folkloric than the poetry of our present. Obviously, I don't equate folk art with simpletons. I was discussing how other critics treated the poetry of Frost, the tenor of their assessments. While a belief in a certain mythology may not be universal, myth is universal in the sense that it presents a worldview, an idea or a symbol of how the world, how the universe, works. While not everyone is a Christian, the Christian faith provides a set of symbols used to understand the universe. God vs Satan is really just good vs evil, a universal theme, for example. Hence my use of the term "universal" in relation with the term "mythic." This is why I believe the term "mythic" is more appropriate than the term "folkloric," as "mythic" seems to allow us to talk about the stories of one specific culture and how those stories or symbols accomplish the universal, while avoiding some of the negative, or restrictive, connotations of the term "folkloric." And besides, "mythic" just sounds awesome. Something the cool kids might say: "Oh man, that was totally mythic." (Disclaimer: I am clearly not one of the cool kids.) Anyway, in the end, I'm really hoping that Dawe's poetry finds the Canadian audience that his work should have had all along. Thanks for your thoughts, J