Broken and sad but grotesquely beautiful 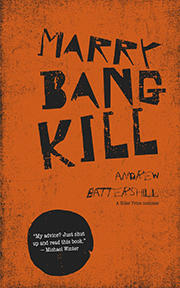 Andrew Battershill’s novel defies classification. Part west coast island thriller, part mystery/adventure, Marry Bang Kill tells the story of Tommy Marlo, a relatively inept thief with perfect pitch who robs people of their laptops. When he ends up robbing the wrong person, the teenage daughter of a notorious motorcycle gang captain, his life takes an abrupt turn and he ends up on the run. What better place to run than a relatively isolated island off the coast of BC with only one way out?

The characters in Marry Bang Kill arrive fully-formed and perfectly drawn: “. . . spending his early teen years as half of one of the approximately 750-and-a-half black people in Victoria, British Columbia, had been, initially, awesome.” Tommy enjoyed the notoriety of growing up half-black in a private high school with privileged rich white girls who view him as a celebrity. Double-standards and class privilege are highlighted throughout the novel, much of it tongue-in-cheek and silly.

But the thing about celebrities is that they’re also commodities. Even as a fourteen-year-old, Tommy had had an inkling of just what he was to these girls, which was a gift. They loved him, but they loved him the way they loved the Mini Coopers their fathers had given them after they’d passed their road tests. And that love is small and sincere and present, until they crumple the fender.

Every character is a treasure in this story and whether they are important to the plot or not has no bearing on their vividness. The reader gets the sense that the author has a complete novel-sized backstory for every single person who wafts through the novel.

At its heart, the story is a drug-addled criminal farce with no true heroes or villains. The characters are both brilliant and sad, each with their own tale of woe that borders on the absurd. Greta is a twenty-something feminist assassin hired by the motorcycle gang to kill Tommy. She is ruthless and remorseless with a Master’s degree in Art History from a prestigious US university: chillingly cold and terrifying, but also funny. At one point, she hits on Mousey, a retired and morally questionable ex-cop, asking him if she can bite his nails because she has already bitten hers (I won’t spoil if he lets her).

The story is told through short vignettes from each character’s perspective, with equal weight given to all the oddballs encountered. Take for instance, Glass Jar Jeffries, a meth-head drug dealer who weaves in and out of the narrative at seemingly random intervals. His are the best lines often punctuated with grotesque and amusing descriptions of the physical side effects of drug use like “the thick bile of a not-swallowed-soon-enough belchpuke.” This visceral reaction that Glass Jar has to the benign ringing of his Motorola flip phone illustrates Battershill’s skill at distorting commonplace events and images.

As the novel progresses, characters become increasingly exaggerated and over-the-top as Greta, the assassin, gets closer to finding Tommy. In their world, the police are as corrupt (if not more so) as the crooks; no one is truly likeable, but this does not prohibit the reader’s enjoyment. Marry Bang Kill, like the party game in the title, presents the reader with equally ridiculous choices for the hero of the story: lazy career criminal mugger, alcoholic retired detective with a questionable past, exceptionally beautiful assassin with a fondness for efficiency. The characters are broken and sad but grotesquely beautiful because there is no one in the novel who is normal or pretty or generous to compare them to. Tommy is not a hero — he is a hapless thief who has made a series of poor choices and had a run of bad luck. The supporting cast of characters are drug dealers, drug users, assassins, thieves, corrupt officials, mobsters and gang members who are held in contrast to the idyllic scenery of the gulf islands. Absurd plot points and silliness of the characters allow the reader to relax and enjoy the caricatures as they are written: outlandish, wild and strange. Andrew Battershill is a genius with small moments and glib lines that make you laugh out loud, or squirm and frown as you try to figure out what exactly he means when a character is smiling like he smiles at clean babies.

The characters hold the novel together, propping up a relatively benign plot. Not much happens and any tension is deliberately broken up by short chapters and quick point of view changes, Pulp Fiction-style. The narrative is choppy and incomprehensible at times, yet the dysfunctional charm of the characters keeps  you from putting the book down..

Tommy had initially been skeptical about the guy with the messed-up teeth and a bandana to whom he paid $600 for a ride to his mom’s place. But the guy had turned out to be a nice man who hadn’t had dental insurance for a long time.

Tommy’s parting line to the guy is to hope his cat’s kidneys feel better. The exchange is ridiculous, sweet and real; the novel is littered with scenes like this. I was expecting a light summer mystery but what I got was a novel where nothing good happens and no one is likeable, but which somehow remains hopeful and fun. Marry Bang Kill is a strange and beautiful read with some of the most vibrant writing about drug use and murders that I have read. You should read it too.
---
Megan Kuklis is a graduate student at the University of Northern British Columbia, in Prince George, BC. She is currently writing her creative thesis, a young-adult fantasy set in the Canadian prairies.