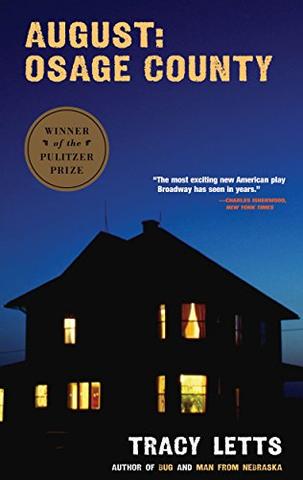 Alongside my role as poet and educator, I screen scripts for the Living Room Series, a play development program at The Blank Theatre in Hollywood, California that produces new works by both emerging and established playwrights. Because of the summer hiatus; however, I currently lack a steady diet of scripts to read. And of course it goes without saying that like everyone else I’ve been starved of live, in-person performances since the COVID-19 lockdown. While it may seem an odd choice, given the play debuted nearly 15 years ago, and it addresses few of the current social and racial justice crises that have crescendoed since the onset of the pandemic, Tracy Letts’ Pulitzer Prize-winning play, August: Osage County (2007) has been my most recent and pleasurable read.

The play concerns itself with the Westons, who converge at their rural Oklahoma estate due to the disappearance of Beverly: family patriarch, once-famous poet, and card-carrying alcoholic. His wife, Violet, who is undergoing treatments for mouth cancer, also suffers from a prescription drug addiction and from the memories of her past—a miserable childhood, disastrous marriage, and struggles with her “privileged” daughters. With her sister Mattie Fae and her family, as well as Violet’s three adult daughters with troubling partners of their own, come insults, cruelty, brutal truths, and ultimately revelations of the family’s darkest secrets. Johnna, a Cheyenne woman hired as a live-in housekeeper, bears witness to the visit and ensuing pandemonium; however, hers unfortunately is a rather flat, one-dimensional part.

On the surface, what draws me to the play are the vicious, often humorous, acid-tongued exchanges between its strong female characters. Violet, in her ruthless “truth-telling,” clearly lacks a filter:

VIOLET: I didn’t say they “don’t grow more attractive,” I said they get ugly. And it’s not really a matter of opinion, Karen dear. You’ve only just started to prove it yourself.

I think what also interests me in August: Osage County is that it is a very “American” play, one whose characters illustrate the concept of “rugged individualism” on steroids, a kind that has devolved for these characters into a mercenary, transactional, and self-serving approach to human relationships. Here we see not a family unified to overcome challenges and obstacles, but a group of separate, alienated individuals. In fact, at one point in the play, Ivy says to her sisters, “We’re just people, some of us accidentally connected by genetics, a random selection of cells.” Also quintessentially American is the younger characters’ unwavering optimism and orientation toward the future. However, this attitude often results in a conspicuous neglect of the past, a past that can remain silent for only so long. Like these characters, many Americans harbor the illusion that they are in complete control of their own lives. But more often than not, this way of thinking results in tragedy. As a writer, I am particularly engaged with the way Letts explores family, autonomy, and power in the play, preoccupations with which I grapple in my own work.

August: Osage County was adapted for the big screen by the playwright himself. The 2013 film features a star-studded cast that includes Meryl Streep, Julia Roberts, and the late, legendary playwright Sam Shepard. Although this adaptation remains fairly faithful to the original and serves as a mostly satisfying counterpart, I would suggest, nevertheless, first reading the text of play. Allow your imagination to be casting agent and director before viewing the film.

While it perhaps lapses at times into caricature and is occasionally tinged with misogyny, August: Osage County is a deliciously dark, over-the-top indulgence, brimming in turns with humor and heartbreak, often striking uncomfortably close to home. For fans of ferocious female characters à la Hedda Gabler, Who’s Afraid of Virginia Woolf, and Long Day’s Journey into Night, I would strongly recommend August: Osage County. Comfort food served up cold.

Cindy King was born in Cleveland and grew up swimming in the shadows of hyperboloid cooling towers on the shores of Lake Erie. She currently lives in Southern Utah, where she don't know a butte from a bluff. She is an Assistant Professor of Creative Writing at Dixie State University. Cindy's poetry is featured in the new Spring 2022 issue of The Fiddlehead. Order your copy today!