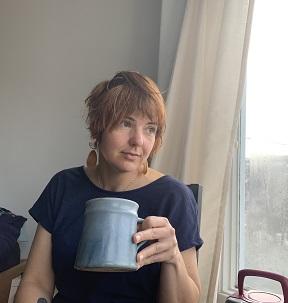 We're excited to announce that Elise Thorburn is the winner of our 2020 Fiction Contest and $2000 prize! Her story Rubens' Salmon is featured in our Winter issue no. 286, which is available now!

Elise Thorburn has a Ph.D. in media and technology studies. She has published in academic journals, and wrote, co-produced and hosted a podcast on the history of electronic monitoring. She is an avid reader, a medical student and a prison abolitionist. This is her first published work of fiction.

Thank you to all who entered the fiction contest and congratulations to the fourteen finalists. And thanks again to our judge Shashi Bhat!

JS: First, thank you for taking the time to speak with me about “Rubens’ Salmon,” and congratulations on winning The Fiddlehead’s Fiction Contest. I was on the editorial staff for this event, and I had the pleasure of reading your work, so I was thrilled to see it pop up again as the winner. The narrator’s journey is much like that of salmon she and her father tend to at the research facility. Like the salmon struggling to make their way upstream, she struggles with the death of her mother and, later, her father. As an adult, she returns to the research facility, developing a sexual relationship with a co-worker much like the adult salmon who return to their “natal riverbeds” to reproduce. And finally, at the end, when she has defaced her lover’s exploitative art collection, she says that she “swam upstream.” In other words, she is Rubens’ eponymous salmon. How did this confluence of the salmon’s journey and the art of Peter Paul Rubens come to be? If any, what parallels do you see in Rubens’ art and the journey of the salmon and, by extension, the narrator?

ET: Well, I grew up in the small coastal communities of B.C., and I spent a lot of my childhood on rivers. In the fall, the salmon swim upstream and begin to die, and the smell is very fecund. The rivers are shallow where they go to lay their eggs, and, as they’re dying, they get beached across rocks and become bloated. They look wild. As a young person, I knew of Rubens’ art and that the term “Rubenesque” referred to the rich and fertile female figures he painted. I thought [the salmon] looked like that. They looked so fertile, large, and voluptuous. Rubens’ art was of people in the prime of their lives, and these salmon—I guess it was their prime. It was their greatest expression of life. I’ve thought about that since I was a child. Then I started thinking about the process of living and dying and moving through the world with this purpose and the way things come full circle. I wanted to think about the beauty and the grief of a creature’s life and the magic of returning to a place of such importance. The time as a child when [the narrator] went to the research station was the end of her mother’s life. When she returned, it was at the end of her father’s life and a period of confusion. The completion of the cycle is the end of her relationship and, in that, escaping the grief that she had experienced—freed from the fleshiness of existence.

JS: The narrator mentions the work of Henry Miller, particularly his derogatory representation of women, filtered through characters like Van Norden. Dario defends Miller by labelling him a “feminist.” When the narrator asks him, “Was a feminist, or loved a feminist,” Dario responds with, “What’s the difference?” Although the answer may be obvious, it goes unanswered in this scene, so I want to pose the same question to you. What is the difference between someone who loves a feminist and someone who is a feminist? Do you think the narrator’s journey helps to define the distinction between the two? If so, how?

ET: I was writing this in the midst of all the protests that were going on about George Floyd and the genocide of black and indigenous people writ large across the world. I thought about how people can demonstrate their allegiance by showing that they have a black friend or that they’ve read the right books. I thought about all the ways we can signal our goodness, our feminism, our anti-racism without actually doing anything, and the way we can claim those identities without ever analyzing if our actions are exploitative or anti-oppressive. All the stuff that I was writing was happening while these protests were going on and when there were all these people revealed to have spent their lives pretending to be people of colour, obtaining positions of power in universities and whatnot. I was thinking about what it was like to be somebody who doesn’t question their feminism and who thinks of themselves as thus but acts differently. Despite being  a young artist in a hip city like Montreal with the sex-positive personality he believes he has in how he makes his art and the books he reads, Dario exploits somebody else’s grief and life experiences. I think the narrator recognizes these things in Dario, but it isn’t until she goes back [to the research station] and has experiences with her own Henry that she’s able to see what somebody who listens to and cares about her can be.

JS: Speaking of Henry, the narrator’s lover, is there an intentional connection between him and Miller beyond the obvious dramatic irony? If so, what do you think we as readers can glean from such a connection?

ET: I’m not a huge fan of Henry Miller and the way he writes women. It’s been a while since I’ve read him, but I didn’t find his women to be fully-formed subjects in their own right. What I wanted out of Henry was for him to be the opposite of Henry Miller. He isn’t a fully formed character—you don’t know much about him—but he allows [the narrator] to be a fully-formed character. His existence allows the narrator to become whole through her interactions with him. Through him, you can see that she enjoys the physicality of sex, the playfulness. She smokes pot and makes this weird lint art. I wanted her to find a bit of happiness and an escape from the grief she was feeling. At the same time, he takes her to the corkboard in the lounge and points out her history to her in a way that’s gentle as opposed to the paintings that Dario makes which are exploitations.

JS: Like Miller, Peter Paul Rubens, the famous Baroque painter, is obviously another major presence in this piece. The narrator crafts her own versions of Rubens’ The Three Graces, Venus in Front of the Mirror, and Satyr and Maid with Fruit Basket. As a writer, what did you learn, stylistically, from looking at Rubens’ work as a painter?

ET: I knew some of his art, but I did research—you know, Google research—and looked at his paintings. As somebody who’s always wished they were a painter, it was nice to re-paint them in my mind and imagine if I had that talent. It was an amazing experiment. It’s hard to describe a painting in words without having the actual piece as a reference because the paintings of Rubens’ art with salmon as the characters don’t exist, so I had to look at his art and imagine what that would look like. It was hard, especially for someone like me. I have aphantasia, where you can’t form mental images. It made me look carefully at his art and figure out what pieces would be what in my imagined parallel paintings.

JS: On that note, do you think other writers can benefit from exposing themselves to more visual forms of art? If so, how might it benefit their writing?

ET: That’s a difficult question for me to answer because I’m not a very experienced writer. I’m sure other writers spend a lot more time engaged in the worlds of art than I do. My husband’s a Russian literature scholar, so he talked to me about this a while ago, and I think it was Nabokov who said he always wrote characters that did the things he couldn’t do. Nabokov could be a writer, but he couldn’t be a photographer or a painter or a ballet dancer, so he wrote characters that did that. I like that because painting and visual art is not something I feel comfortable making, so it was a way to explore those fantasies of what you could be. I spent a lot of time looking at the paintings of Rubens and that led me to learn about Baroque art and art history in a surface-level way that let me think about writing and fitting a story into the history of art that I was learning about. I’m sure writers could learn a lot from art, but I’m hesitant to give advice since I’m an extreme amateur.

JS: Do you think there is a danger of art becoming too exploitative, much like Dario’s? Where is that line between art and exploitation?

ET: Yeah. There was that controversy several years ago about a white artist who did a painting of Emmett Till, the young black boy who was murdered by racists in the 50s or 60s. I think it ended up in the MoMA [The Museum of Modern Art]. There was a lot of controversy about whether or not a white person can take on, paint, and represent that grief. I think in situations like that you can step over into exploitation; yet, we all have to learn how to empathize with each other. One of the ways I learn how to empathize is from literature and art, learning about what other human and non-human experiences of the world are—things I can’t have access to as a white person or as a human being. We invent and become more empathetic beings through art. So, I guess you just have to take care in making your art so it avoids exploitation, stereotyping, and tropes of characters. And maybe in some situations thinking, “Am I the person to make this art? If I am, is this art just for me or to be shared with the world?” I’m not sure if there’s a firm line where art tips over into exploitation. It depends on what your politics are. At the end of the day, it’s about why you’re