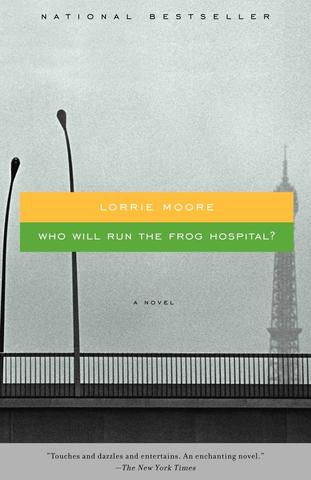 Lately, I’ve been drawn to sentences—the kind of eccentric, glittering sentences that seem to expose the writer’s obsession with tweaking and re-tweaking the diction and phrasing until the sentence finally arrives at a precise balance of rhythm and imagery. To me, no one does this better in fiction than Lorrie Moore. Having been a fan of her short stories for years, I recently picked up a slim novel of hers called Who Will Run the Frog Hospital? The story is the coming-of-age tale of a young woman named Berie Carr, who spends a pivotal summer working with her best friend, Sils, at a kitschy amusement park called Storyland. From the very first sentence, I wondered why it had taken me so long to get here:

“In Paris we eat brains every night.”

I can’t imagine a more compelling opener. The mention of Paris lends an air of elegance, and yet the grotesqueness of “we eat brains” pushes brazenly against it. How can one resist reading on?

I’ve begun the habit now, inspired by Moore’s attention to sentences, of judging every book by its first and last sentences. It’s a good way to determine whether to buy a book and add it to my ever-teetering pile of unreads. I pick up the book, flip to the first sentence, and then flip to the last sentence. If those two sentences are beautifully crafted to the point where they seem to move like something alive on the page, it’s usually safe to assume that the rest of the book will be well worth the time. Indeed, the final lines of Who Will Run the Frog Hospital? are just as marvelous as the first:

"In all my life as a woman—which began soon after, and not unrichly—I have never known such a moment. Though sometimes in my             brain I go back to that afternoon, to relive it, sail up there again toward the acoustic panels, the basketball hoops, and the old oak clock,         the careful harmonies set loose from our voices so pure and exact and light we wondered later, packing up to leave, how high and fast           and far they had gone."

This novel, packed into a mere 148 pages, is a feast of beautiful sentences. I’d highly recommend it (and anything else Moore has written) for those interested in learning more about the craft of fiction writing.

Corinna Chong’s novel, Belinda’s Rings, was published by NeWest Press in 2013, and her stories have most recently appeared in Grain and Riddle Fence. Her story "Love Cream Heat" is featured in the new autumn issue of The Fiddlehead. She won the 2021 CBC Short Story Prize for “Kids in Kindergarten.” She lives in Kelowna and teaches at Okanagan College