Don't Judge This Book By Its Title 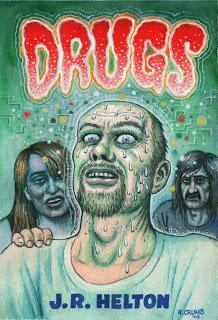 The subject matter of J.R. Helton’s Drugs (Seven Stories Press) might at first appear self-evident, but it is the combination of imbibed adventures, personal struggle, and the exploration of the effects various drugs have on the individual and his/her place in society that make this fictionalized memoir a layered, gripping read.

In Drugs, Helton takes readers inside the mind and experiences of Jake, a functional drug user who, from his licentious beginnings as a teenager, makes no apologies for his chemical indulgences, despite growing up in what could be construed by the casual reader as the fulfilment of the American Dream:

I was a straight A honor roll student in Cypress High School, a serious athlete, the captain and leader of my varsity basketball team. There were many pictures of my attractive girlfriend and me—the friendly, smiling, charming guy—in the high school yearbook.

Thus begins Helton’s novel, and we also learn from the outset that Jake has various jobs outside of school and works on his drawings during solitary sessions in his room—a hint of his doppelganger artistic side that is further developed as Drugs progresses. In other words, Jake is the guy everyone was jealous of in high school, the rare scholar-athlete who is also somehow socially adept, and it is precisely this character sketch—the All-American teen who has everything going for him—that makes Jake’s decent into drug abuse so believable.

While Jake unremarkably (but still compellingly) begins his life of substance abuse through the excessive consumption of marijuana with his groundskeeper boss, Kevin, his transition to cocaine—the novel’s early second act—quickly descends into a darker recess of experiences and human consciousness. At this early juncture it is tempting to ask of Jake, “why abuse drugs; what is the impetus?” to which Helton’s voice seems to firmly reply “why not?” Perhaps it is mere curiosity or the omnipresence and accessibility of narcotics, but Helton skilfully avoids the pitfall of suggesting that every user turns to drugs as a product of negative circumstances.

Of course, many of Jake’s experiences throughout the novel will strike readers as starkly negative, but there is always an undercurrent of humour or the absurd that balances the genuine danger and self-destruction that pervades the novel. As Jake and his young wife, Susan, move in with their cocaine dealer, Corky, and his girlfriend, Jill, things get progressively strange as Jake accompanies Corky on his drugs runs and watches his “friend”/dealer brutally beat up an associate for lying about his alleged brother actually being his cousin.

It is this sense of the irrational providing justification for a slew of violent, destructive, or sexual acts that underlies Jake’s journey through altered states of consciousness. After an extended liaison with lecherous cocaine couple James and Mercedes, Jake’s marriage to Susan unravels amidst their increasingly problematic drug habits and inabilities to sustain their lifestyle or cope with reality. Infidelity and, more significantly, the inability to honestly communicate pervade Jake’s relationship with his wives (and women in general) throughout the novel, rendering the female characters vehicles for Jake’s self-destruction, which ebbs and flows with the rush of drug use, as seen when Jake does cocaine for the last time after marrying a woman named Karen:

Anxiety began to slowly creep into my chest as I worried about my new job, my new home, my new bills, my new wife, or that I was still somewhat in love with my old wife, that I was still working in a business I hated, that we were always short on money, that I didn’t know what I was going to do with my life, how could I make a living this way and still have time to write, how impossible was this becoming already? And this messy last wedding I’d just had, Jesus Christ, my father fighting with both me and my new wife, yelling, he and I threatening each other with blows at the reception, it was obvious this new woman loved confrontation, egging on my parents, plus neither of them thought she was good for me, and even worse, I knew this to be true already, that I had made a typical rebound marriage rookie mistake, I shouldn’t have done this, getting married, doing coke, why did I do it again?

Here, Helton’s frenetic prose mimics the frantic and desperate logic of a cocaine-induced thought process. It is not enough to describe the effects of the drug or relay a disturbingly tale of debauchery; Helton combines the fantastical drug yarn—in the mould of Burroughs and Selby—with the support of stylistic elements that reflect altered states of consciousness. Whether it is through sentence structure, imagery, fragmentation, or run-on ranting, Drugs offers surprisingly subtle stylistic tricks at nearly every turn.

If Jake’s second wife, Karen, loves confrontation, then the histrionics of their life and marriage are aptly reflected in the alcohol act of Drugs, including a tempestuous stretch of having Karen’s best friend, Heather, live with them. At this juncture, Helton writes of Jake, “I was still in my early thirties and virile, or just more interested in sex as a daily respite or escape. If I didn’t have sex with a woman each day, I’d masturbate to feel that brief high of an orgasm, a release leading to some small, short relaxation, usually twice a day.” Naturally, living with two women wears on Jake’s addictive and obsessive personality, and a life-threatening accident on his residence—The Farm—spirals into further alcohol and prescription drug abuse.

Up to this point, Helton has hinted at Jake’s artistic side and mostly latent desire to be a writer. While the reader has not seen concrete evidence or a manifestation of this artistic yearning, Helton drops enough hints to prepare one for Jake’s revelation while on mushrooms and standing on his back balcony, which provides one of the novel’s most memorable passages:

A feeling of deep comfort and profound confidence slowly melted into my skull and limbs. I am an artist, I thought. For the very first time, I truly felt it. It mattered little what others thought of my work or me; it mattered not at all. The point was the way I was now looking at the world, the same curious way I had once looked at so much of the world as a boy, as something to copy, something to draw, to paint, and reproduce. I suddenly realized, for so many years, I had just been afraid. I had lacked the simple and basic confidence I’d once had as a child. Now, on this balcony, my worries over my work all seemed so utterly foolish, pedestrian, and dull.

As Jake basks in this moment of artistic realization, the reader is of course painfully aware that such thoughts are the product of a mushroom-induced high. But in looking at the simplicity of stucco buildings from his balcony, the mundane image and directness of Helton’s prose makes one wonder whether amidst Jake’s altered consciousness there just might be a hint of genuine perception and understanding. It is significant that this moment occurs after a night of communion with Dean, Jake’s best friend from high school—another thinking man’s jock who provides the deep, interpersonal relationship the novel demands and that Jake is unable to find or express with the female characters. As Jake briefly abuses mushrooms to the point of negating any positive experience with his new squeeze, Patricia, Dean represents a stable and constant force in his life, even if their communion is consistently laced with drug abuse and bonding through altered states of consciousness. Still, Jake can express his hopes and fears to Dean, another functional drug user who, “Like me [Jake], he was a critical thinker, suspicious already of the hollow hypocrisy of the American Dream.”

After securing a job as a reputable ESL professor, Jake decides to drop some MDMA before his final class of the semester. Arriving at campus several hours early, Jake’s altered state precipitates a desire to connect with Dean, and the ensuing email correspondence is rambling, revealing, and ultimately honest. Interestingly, the correspondence where Jake reveals the most about his life philosophy and personal beliefs is conducted via a medium that combines both immediacy and distance. An apt metaphor for the struggle Jake battles throughout the novel of what constitutes genuine self-expression, the email conversation with Dean hints at the limitless emotional landscape of Drugs, while also offering a stark reminder of the true isolation that pervades the novel, a realization Jake comes to after reading Dean’s cyber-reply:

I looked across my classroom and realized he was right. As hard and sarcastic as I was, I did still believe [in the ability to find meaning], and it wasn’t just the drug that made it so. That said, I was relieved when the class ended, happy at the thought of not having to see anyone else now for almost a month of free time, when I would be able to drop my public mask for an extended period, returning to my solitary and personal existence, with my books and my little family, away from this world, in the comfort of my home.

In Drugs “home” means multiple things, and the escape Jake describes could be literal sober isolation or further descent into intoxication. While it would be simplistic and lazy to label and categorize the narrative arc of Drugs in terms of Jake’s consumption of everything from opium to canisters of nitrous oxide (seriously), such an approach ignores the skilful ambiguity of what is transpiring. Are Jake’s “moments” with Dean actually genuine, or are they temporary instances of sloppily expressed love and admiration? Well, they could be both, or neither. What Drugs offers instead of concrete answers to the larger existential questions that serve as the novel’s backdrop are moments that are genuine insofar as they are catalogues and storehouses of experience. Thus, each episode, vignette, or period of Jake’s journey is what it is, and the beauty of it all is that they can be simultaneously depressing, terrifying, and ecstatic. It all depends on perception.

So don’t judge or label Drugs by its title, the wicked cover design by Robert Crumb (how cool is that, though?), or the scintillating and insane narrative arc. Instead, adopt the reflective mindset Helton adheres to at the novel’s end, soaking in the positives and negatives of his experiences, always reflective with a realization that there are no simple answers, or straightforward explanations.

Want to read Helton in French? Check out this promo video for the 13e note release of his book.

By Zachary Alapi
Editorial Board