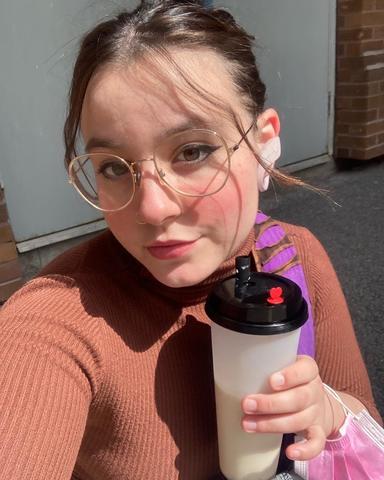 Intern Brigitte Robichaud's interview with Acadian Currah about her essay "Femme Fatales and The Lavender Menace” from the summer creative nonfiction issue:

Brigitte Robichaud: This piece is an interesting exploration of a young woman’s acceptance of her same-sex attraction, but it is also a message about self-love. What inspired you to write this piece and create this narrator?

I came out five years ago at age fourteen, so while writing this piece I tried to enter the headspace of myself at that age with the language I possess now to articulate my thoughts. My inspiration to write this piece comes primarily from the overwhelming loneliness and shame I felt at that time. By writing this piece, I can only hope someone can read and resonate with the messages in the way that I would have been able to. My inspiration comes both from the terrified child aching to brush hands with a girl in homeroom and the adult living four thousand miles away who still hesitates to say “boyfriend” instead of “girlfriend” to strangers who ask if I’m seeing anyone.

Writing this piece and sharing it with my friends and family (And eventually the readers of The Fiddlehead!) helped me to love all of them, and the publication process brings me hope that someone will find a small piece of themselves in my writing.

BR: Are there any LGTQIA2S+ writers or artists who inspire you?

AC: Yes! So many. I was looping “Getting Better” by Izzy Cenedese the whole time I was writing my piece; their lyricism really resonated so well with my style of writing. I went to one of their shows in Vancouver a week before I finished the first draft.
The first work in a similar genre to my piece that I read was Tomboy Survival Guide by Ivan Coyote. I found their work extremely moving and genuine. It was also the first work I’d ever read that discussed queerness and gender identity in the genre I knew I wanted to write. I also love the poetry of Richard Siken for its language and emotional impact, and the poetry of Dionne Brand for its visceral detail and her unique style of writing.

The most recent queer project I have been interested in is Embodiment: A Portrait Of Queer Life in America (with Creators Molly Landreth,  Amelia Tovey, Jamey Baumgardt, Scott Smith, Ryan Eugene Macdonald & Kelli Rudick). I find that the photos reflect the peace and mundanity of everyday queer life and are an important representation of the community.

BR: Could you tell us more about the significance of the title of your piece? If you wish to keep its significance a mystery, how do choices such as title and structure impact the meaning of a piece?

AC: The significance of the title of this essay is twofold, with a “Femme Fatale” being a stock character of a seductive woman in fiction; however, later in the piece I allude to Femme identity as it pertains to queerness and my own lesbianism. I choose to use “Femme Fatale” because although I do not employ that particular trope in terms of the women in my piece, the idea of a scary or “fatal” kind of attraction is something that I felt spoke to the heart of the essay.

“Lavender Menace” was a lesbian feminist group formed in the 1970s, but originated as a negative phrase to describe lesbians within the feminist movement. Given that this essay is not political, I am leaning more towards the original meaning of the phrase rather than the politics behind it. A kind of fear surrounding lesbian sexuality, the kind that would incite panic or hate. Both of these phrases used in the title have negative and positive connotations; the essay begins in a place of fear and ends in one of self-acceptance.

BR: The narrator seems to speak specifically to the reader as if you intended the reader to put themselves in her shoes. Did you have any audience in mind while writing this piece and what was your thought process like? What made you choose the second POV to convey your story?

AC: As a stylistic choice, I write almost everything in the second-person. With this piece in particular, I felt it was important to force perspective as the topic was so specific to my own experiences. In theory, this POV works best for a reader who has not personally experienced internalized homophobia. But I found through sending it to my friends and family that it worked for those who had experienced it as well, as the second-person depicted their own experience without isolating the reader with an “I” pronoun.

While writing the piece, I imagined addressing it to my younger self. Internalized homophobia is often illustrated as one thing in media, “I hate being gay” or “I don’t want to be gay.” As much as this is part of it, it is hard to find representation as a young queer woman that explores the complexities of how you actually feel: a fear of masculinity, as well as the feeling that your queerness strips you of femininity, and an association with love, platonic or romantic, as something shameful. These things, though unpleasant, would have made me feel seen and understood when I was struggling with my sexuality, which is, in part, why I chose to write the essay.

BR: Do you have any future projects you are currently working on? What can we look forward to reading of yours in the future?

AC: Yes! God, so many. I had a recent publication with Other Worldly Women’s Press on August 1st in their Behind Closed Doors anthology (with a piece that is, funnily enough, titled ‘Femme Fatale’, which I wrote when I was seventeen). Also, an upcoming online publication with Cosmic Double of my piece “Little League,” which I consider a “little sister” essay to “Femme Fatales and The Lavender Menace” as it explores similar subject matter.

I also have some projects in the works that require heavy editing before being published, but hopefully you’ll see them soon enough. The Fiddlehead is an amazing opportunity for my work, and I cannot wait to see where my writing takes me in the future.

Acacadia Currah (she/they) is an essayist and poet residing in Vancouver, BC. Their work explores her relationship with gender, sexuality, and religion. She is a leather-jacket-latte-toting lesbian, her work seeks to reach those who most need to hear it. Their work has appeared in The Spotlong Review and Defunkt Magazine.

Order your copy of issue 292 to read "Femme Fatales and The Lavender Menace” and the twenty-three other fantastic pieces presented in this issue.