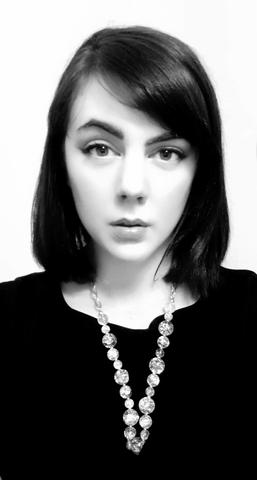 William Bonfiglio: Congratulations on winning the 2019 Fiddlehead Short Fiction Contest. It was a privilege and a pleasure to read "The Most Beautiful Woman in New Brunswick: Coming to a Field Near You" and nominate it for the shortlist, and even more so to see it awarded first prize. While reading this piece, I am perhaps most struck by the story's sense of voice. Diction and dialect and syntax and punctuation — these qualities of your writing seem to perfectly reflect the characters, setting, and stakes. To what extent is the voice in this story a product of the narrative, and vice-versa?

Emily Bossé: Everything in this story is filtered through the character of Diane, and part of her character is that her voice remains essentially the same no matter the stakes. Whether she's hinting at some disturbing behaviour from her mother, vomiting into the azaleas or drinking a cherry coke, her tone is relentlessly, doggedly, chipper. In that sense, the narrative doesn't really have much effect on her voice. As for narrative being a product of voice — it's a bit trickier I guess. I wouldn't say Diane is an unreliable narrator. She is telling us what happened as best as she can. If the story is skewed it's because of her forced optimism and need to focus on the good and the beautiful: not a desire to tell the story in a way that puts her in the best light.

WB: While your story clearly succeeds in its distinct style of expression, it simultaneously speaks volumes by what it withholds. For example, the critical assault upon Diane in the field is not conveyed in scene, but the descriptions of its aftermath nevertheless give readers enough to pick up the pieces, much like Diane herself gathers clothing. What inspired the decision to omit this sequence, and how do you see omission as a complement to the narrative?

EB: A character like Diane tells lies of omission to herself constantly. In the case of the assault at the centre of the story, the blank surrounding it is for two reasons. One, she can't face what's happened. And two, it's a product of poisonous "positive thinking." Her guide to life, Here's to You Miss Teen, frames cheeriness and bubbliness as the appropriate (and most womanly) response to everything. If that's all you have in your tool belt, how can you describe pain? How could you possibly acknowledge something terrible and work through it? On another level, omission is an effective narrative device. It builds tension and interest...but that's not a terribly exciting or insightful answer.

WB: I find it interesting that Diane would draw reference from Here’s to You Miss Teen — a conduct book from the 60s (yes?). While there are a few other suggestions here and there, this is the closest indication of time in the narrative; otherwise, these characters, their needs, and their traumas could just as well fit the present day. Was this by design?

EB: Here's to You Miss Teen is actually something my mother owned, but it was outdated by the time she was a teen. She kept it around so that my sister and I could flip through it and wonder why anyone would ever recommend heavy duty girdles to fourteen-year-olds. If the characters and narrative seem timeless, I think that's because being a teenage girl is universally traumatic. It's instantly recognizable. I didn't intentionally exclude details to obscure the decade — our experiences span eras more than we'd like to admit.

WB: To continue the discussion of setting, your story is New Brunswick to its bones. Where does your familiarity with New Brunswick draw from? Does it colour much of your work?

EB: I lived in New Brunswick until three years ago — I'm actually an East Coast transplant here in Toronto. Most of my stories and plays are set in New Brunswick. I remember in school we were taught a very restrictive version of CanLit: ice fishing, rural poverty, sled dogs, widows in snowstorms, etc. Then I read Timothy Findley's Not Wanted on the Voyage and my mind was blown. This was Canadian too. Part of the reason why I set stories in NB is because I want to show that the whole breadth of human experience happens here. The weird, the fantastic, we have it too. Maybe this seems simplistic, but I've met a lot of people who think that being from the Maritimes means having a limited experience of the world. The other reason, much cornier, is it's the home of my heart. It's what I know.

Emily Bossé was one of three finalists for the Journey Prize in 2015 for her story "Last Animal Standing on Gentleman's Farm, also published in The Fiddlehead. She completed her Master of Arts in English and Creative Writing at the University of New Brunswick in 2014. Her first full-length play, Cocaine Plane!, enjoyed a sold out run in Fredericton and was remounted in Saint John, NB in May 2017. Emily’s current projects include a short story manuscript, Small Notes After a Large Orgy, a new play called HIGH LONESOME and a novel based on the real-life events explored in her debut play Cocaine Plane!

Permalink Submitted by Alix Graham (not verified) on Fri, 02/07/2020 - 16:10
I was blown away by Emily Bosse's winning short story. A devastating snippet in the life of a misguided, optimistic teen.