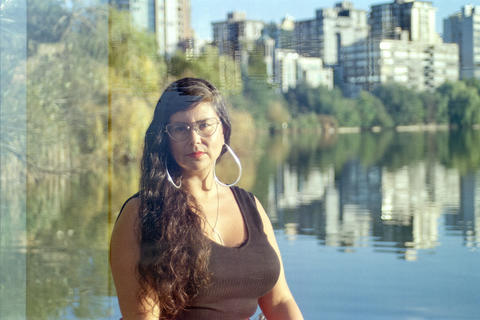 Fawn Parker: There's such a strong sense of atmosphere in this story. How do you tend to approach tone in prose?

Adele Barclay: My approach to tone in prose is heavily influenced by my impulses as a poet: a mood, feeling or ineffable idea drives me to gather a collection of objects, sensory experiences, and cultural references to circle around it. Often more than plot, I need a concrete sense of atmosphere to proceed when writing a story. I need to be able to see and smell and touch the world I'm writing about. I need to know what music these characters listen to, what clothes they wear, what they eat, which emojis they use when they text.

Having a distinct atmosphere pinned down helps me imagine the action and conflict that would happen on the ground. Here Be Dragons ISO felt very mildewy and muted, sludgy green with some pops of dark but vibrant colours--I was trying to conjure queer millennial East Van with a swampy supernatural twist.

FP: The form of this piece is very fitting, echoing the character's experience of the dating app with the headings/subtitles throughout. Can you talk about how you arrived at this form?

AB: The dating app bios written by monsters that serve as headings were the first part of the story I dreamed up. I wrote this list of expansive monster-inspired personal ads—I knew I wanted to incorporate them into a story even though on the page the list looked more akin to a poem.

To complement the headings of queer monster personals, I began to think about a story where a lonely queer is ironically encountering something uncanny in her intimate, domestic space while the queers around her, who peddle in this vocabulary of magic and monsters, are unaware and actually quite tame.

I was inspired by the queer text-based dating app Lex where queers throw their pleas for connection--for dates, friends, book clubs, being witnessed in the midst of quarantine--out into the abyss. I wanted to both admire and pry at our linguistic innovation as queers--how we remix terms, items, archetypes we've inherited that don't quite fit and transform them into new identities that do. Sometimes the mad libs wordplay is cute, hot, powerful, but sometimes it’s annoying or cloying. The queer personal ad/dating bio is a code that's only legible to other queers but even if we're read, we're still not necessarily understood or known by our communities. Intimacy, it turns out, is still really hard to build even with those you share space and language with.

As the dating app bios punctuated the story, I wanted them to get progressively more ridiculous in terms of monsters spilling niche queer dating tropes in order to contrast with Danny’s grappling with connection in her day-to-day life.

FP: Something that stood out to me is the element of surprise. This story really played with my expectations (the moment where they are in the bath together, what happens with the cleaning solution at the end), but even the more surprising elements felt in line with this world you've built. Was it a conscious choice to construct these turns?

AB: Excellent--I’m happy to hear the plot played with your expectations! The surprise turns in the story came really naturally as I was writing. I wanted to infuse some light horror and supernatural elements into this slice-of-life short story, and so I think that's where the surprises come from. The story’s fantastical impulses dictated uncanny actions even though there’s a strong tether to the ordinary. I also wanted to illuminate my protagonist’s mundane fears, flaws and desires with a slyly grotesque framework. The story may be fantastical, but all of those turns are rooted in Danny’s emotional reality.

The story’s an example of what Amber Dawn calls New Queer Weird—a queer variation of slipstream that entails a lot of genre- and culture-mashing. It was fun to think about how to dramatize intimacy and attachment issues without needing to stick entirely to realism.

I also took some pleasure in the ending. I felt like I was laying some traps…

FP: Often I find that the initial "seed" of a story will end up being quite a small detail in the final draft, or get edited out entirely. Where did this story start for you, and has that changed?

AB: The seed of the story was the aforementioned form—queer monsters sending absurd dating app personals into the ether. And then from there I imagined this queer having a bath and scrolling Lex ads that boast of beastly identities when a literal monster appears in her bathtub. She’s so isolated that the creature doesn’t faze her and she doesn’t bother telling anyone that something big and weird has happened. That idea of queer monstrous language vs. literal monsters was the seed and it stuck.

And from that formal seed, my intentions were that I wanted to play with the lines between radical queerness and homonormativity and the psychological chaos of queer millennials having grown up in an explicitly homophobic world only to become adults post-Glee and amidst EDI initiatives.

FP: Is there anywhere else readers can expect to find some more work from you, recent or forthcoming?

AB: I’m writing my guts out working on a creative nonfiction project called Black Cherry about me and my older sister growing up and becoming artists under influence of grunge and amidst domestic violence. It’s a lyric memoir that grapples with survival, grief, and the possibilities and limits of art in the wake of my sister Elissa’s death by suicide.

Readers can find proto-essays for this memoir project in the anthology Impact: Women Writing After Concussion (University of Alberta Press, 2021) and in the following magazines: “Culture Will Have Her Girls” in The Puritan and “Not silent all these years” in This Magazine.

I’m also working on fiction—more weird queer stories and a Gulf Island noir novel. All of my fiction is in the works, so readers will have to wait for me to finish and for others to want to publish!

And I have two collections of poetry: If I Were in a Cage I’d Reach Out for You and Renaissance Normcore that also play with form, culture and intimacy.

Click here to read an excerpt from Here Be Dragons ISO