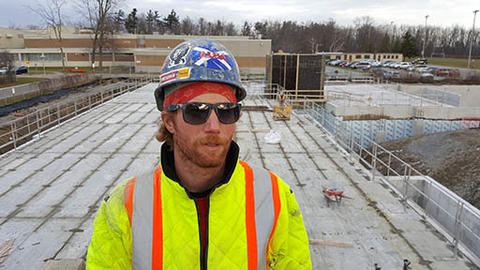 Salar Ghatta: I would like to start by asking what inspired the piece and why Milton Acorn?

Nicholas Herring: I’m not entirely certain, even at this moment in time (which is to say, somewhat removed from the writing process — such that it does not feel all that familiar), what exactly inspired the piece. My mother died a couple of years ago and it was an especially painful and traumatic ordeal to witness. I contracted dermatitis all over my body and my hair started to fall out; I couldn’t sleep; I had panic attacks. I realized that I loved her more than I could ever really account for — that I owed her a great debt, and I also realized that my mother was something of a mystery to me. This mysterious debt, if you will, also struck me as profound and beautiful, and totally necessary. I tried writing about her life, but then I realized, rather quickly, that to do so, to try and investigate her life, the experiences and choices she made, was unfair (which isn’t the most precise word). I loved her dearly; this much is true. And nothing can undo this love. (I’m uncertain if she knew how much it was that I loved her; I still cry thinking about her and this idea.) She’s very much alive in my mind; I contemplate how it was that she was robbed of time. I’ve made a lot of mistakes in my life (and I will probably continue to do so), but now I’m more acutely aware of the passage of time, and of how precious it is, and of how nothing really matters more than this, that most things can be — or ought to be — forgiven. Humans don’t forgive as much as they should. Also, Nietzsche wrote that there is no virtue superior to life; he is quite correct. Most lives are full of struggle and catastrophe — just try to do the best you can, and, avoid orthodoxies, whatever the cost.

I had been thinking about Milton Acorn for the better part of a decade. (Perhaps I was thinking that he would be an interesting basis for a fictional character.) Somehow or another, after my mother died, I started writing this whole book about his representations in fiction and nonfiction, which sometimes felt very much like the same things. I read and watched and listened to everything I could find about him. I wanted to try and understand him and why it was that most people knew nothing about him, or, if they did, it was usually inaccurate, as far as I could tell. I also wanted to explain his diminishment of stature within Canadian Literature; why he was not remembered; why he had become something of a ghost. (That there will never be another Milton Acorn strikes me as a reasonable proposition; and, as such, his example should matter. His trials made it easier, in very concrete ways, for every poet that has emerged since.) This book lost its energy about three-quarters of the way in; it began to sound like a PhD dissertation, which, in some ways, it was. I shelved it, which is something that most writers are very good at, I think. I knew that it was good — maybe the best thing I had ever thought about; I just needed to solve a number of formal problems.

SGH: Can you tell us a little about your research process – particularly the selection of what information, facts, and rumors you wanted to include?

NH: As I say, I digested all that I could regarding Milton because I wanted to enact a kind of forensic accounting of his life. It seemed that in his biographies there had been no effort to try and empathize with the man, or, at the very least, to try and understand his mind, which is, admittedly, a supremely difficult thing to do, and perhaps not entirely suitable for a biography to have sufficient meaning, and for it to be objective, or marketable. I created a seemingly endless cross-referencing document in which I paired, or, joined (maybe clustered is the best word) all of the details together in a kind of Acorn tapestry in which gravities and relativities all competed, to my eye, for space and for verity. I didn’t think of any of this in terms of fact or rumour or hearsay; I was creating a kind of ordered universe to help me deal with the fact of watching my mother die. I never stopped thinking about my mother and Milton; the two of them were hopelessly entangled. And then one day, I realized how to solve my problem. I sat down and wrote the whole thing in probably less than fifteen to twenty hours, and when I was done, I probably wept a tad, because everything that I did not know I needed and wanted had come to me, or come through me. (I’m approximating here . . . this is actually quite difficult to talk about.) I knew that I had done something that was decent, that could live out in the world beyond my mind for a spell.

SGH: Would the piece look different if it was about someone else? How did Acorn’s character, his poetry, and his reputation as the People’s Poet determine the aesthetic choices you made?

NH: This is a very good question. (I’m not certain I know how to answer this with any fullness.) I had some sense that I wanted the piece to be a kind of poem, or, at the very least, to try and be poetic in its form and presentation, and so, I have to think that once I found my rhythm, which came with time and so much damn patience, my brain just sort of knew what it was doing. I wanted there to be beauty, or some small measure of beauty, at each turn; so, with regard to aesthetics, I thought simply of this: if everything is necessary, which it is, then, how do I make it beautiful?

SGH: The piece is quite polyphonic. This polyphony is, of course, reflected in the title. Unlike a traditional biographical account which often legitimizes a single life narrative over others, your writing opts for a pluralistic mode of representation. The different accounts that you provide at times negate and at other times supplement each other, but most often they provide multiple angles on a certain aspect of Acorn’s life. The style and formal structure which carry this polyphony are quite idiosyncratic. What are some polyphonic pieces of writing that influence you and what are your points of departure from those influences?

NH: Again, I wasn’t outwardly conscious of what I was doing with all of this. I just knew what felt right to me and what didn’t feel correct. I had loosely modelled my book on Milton around Edmund Wilson’s To the Finland Station, which, seems to me, to be a very singular work (a juggernaut, truth be told) in the history of literature. I’m not even certain I understand the book and its presentation of history and ideas — it read to me like a kind of dream. Nonetheless, it’s a remarkably intoxicating book. I was also reading a lot of Susan Sontag and Walter Benjamin and Joan Didion and Eduardo Galeano and Eliot Weinberger and their influence and assistance is self-evident. People should read more Galeano and Weinberger! Oh, and Joan Acocella’s book of essays, Twenty-eight Artists and Two Saints helped me with my choices. And, Thomas Merton has to be included in there — he’s my guy!

SGH: The tone of the piece is very distinct. Its humor is not irreverent; rather it is responsive to Acorn’s human multi-dimensionality. How did you find the appropriate tone to write about Acorn? How did you develop the tone? Can you tell us about the writers who had an impact specifically on your sense of humor in writing?

NH: I think it could be fairly stated that the tone came out of a lengthy distillation process, and again, that this distillation was borne of frustration, or, an impasse. Humour, is very important to me. I’ve learned more about life from the films of Charlie Chaplin and Buster Keaton and The Three Stooges than I care to admit. So, my system, if I’m in a rut, is to always go for the humour. And, I had a sense that Milton was something of a trickster figure — or, more accurately, a kind of court jester — and that I should honour this quality, which is something that was mostly neglected in the academic work. Also, Bertrand Russell’s Proposed Roads to Freedom had a profound effect on how I approached Milton and how I organized my ideas. You see, he really was rather funny, and so, I wanted to let him be this way.

SGH: The current issue of The Fiddlehead opens with a piece by Alicia Elliot concerning the difficulty of defining and delineating creative nonfiction as a genre. How do you think your writing negotiates that difficulty? Where does it reiterate dominant conceptions of the genre and where does it reinvent them?

NH: Truth be told, I’m also not entirely certain how to answer this question. I know that other writers address this in the strongest ways possible. I would recommend Javier Cercas and his brilliant The Impostor: A True Story. Read this and see how you feel about the relationship between fiction and nonfiction. Ultimately, it’s going to be about what you think you might be able to live with going forward, into the unknown.

SGH: How does the piece respond to the contemporary hardening of the dichotomy between fact and fiction which has resulted from the emergence of discourses around “fake news”?

NH: Well, the truth of it is simple: my piece is not a response to any of this. “Fake news” strikes me as a rather idiotic notion and it’s not something I’m particularly interested in talking about. I do think that in every morsel of presented truth, a bit of bullshit is there, like the wrapper on a hard candy, but this does not mean you can just dispose of the whole endeavour. You can say what you like about Milton Acorn, but the work still stands as powerful and as truthful. He was really swinging for the fences with his poetry, and so, if he had to cut some corners in his personal dealings with other people, who were also poets and writers competing for space in the marketplace of ideas, then, so be it. That poets aren’t always the nicest of people is worth being honest about.

SGH: What is next for you? Can you tell us about any upcoming writing projects?

NH: I’m working on a slim work of history regarding the nightmares of eminent Islanders, and I’m working on another slim volume entitled Red Herrings: Communist Literature in the Maritimes. I also have a suite of novellas that I’m trying to complete, but it’s very hard to find the time and money to finish these projects.

Nicholas Herring has worked as a butcher, court reporter, dog walker, landscaper, and construction labourer. He graduated from St. Jerome’s University with an honours degree in English Literature and attended the University of Toronto where he completed an MA in Creative Writing.

Permalink Submitted by Angie O'Neill (not verified) on Fri, 12/02/2022 - 08:11
Hi Nicholas. I moved to Murray Harbour from Iris when I was in my teens and lived there when I got married. I am curious who your parents are...I went to school with Herrings and worked for a family with that name. I just got your book "Some Hellish" for my birthday...can't wait to dive in...take care.