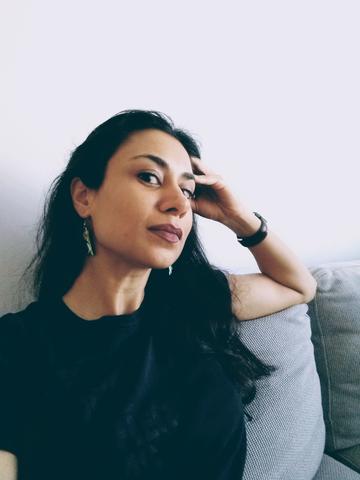 Editorial Assistant Shauna Deathe's interview with Preeti Kaur Dhaliwal about her poem “On Survival and Exhalation” from the new BIPOC Solidarities Issue.

Shauna Deathe: The Fiddlehead’s BIPOC Solidarities winter 2022 features your poem “On Survival and Exhalation” - which I absolutely adored, by the way. It opens with an excerpt from “Preeti’s Pandemic Journal, March 2020.” Can you tell me more about that project, and why you’re drawing from there?

Preeti Kaur Dhaliwal: I’m working on developing a self-referential method where I use a younger version of myself (from old journals and notebooks) either as an epigraph for a new free verse poem or to source lines for a form poem, particularly pantoums and ghazals (though I’m still struggling with the ghazal). I want to see how older versions of myself both do and don’t exist in the current version of me (as I see her). This method lets me step outside of myself and shape the different versions of Preeti into a character who lives in a larger narrative.

The larger project, Lullabied Fractions, is a polyphonic, hybrid collection of poetry about desire, grief, longing and love as experienced by Punjabi women. It draws on my personal journals from the ages of 5 to 35, the stories of three older Punjabi women (obtained via interview), and excerpted translations of Amrita Pritam’s work. Framed by my narrative voice (reflective/past tense) and guided by questions of “how did I become a difficult woman” and “what is a difficult woman,” I hope to weave these three sources and five voices together as fragments and poems that read as one narrative.

Lullabied Fractions challenges the idea of a traditional memoir with one narrator by showing multiple experiences that span generations and continents. We often speak of intergenerational trauma but I’m also interested in intergenerational feeling: the way stories—spoken, written and embodied—consciously and unconsciously shape our ways of feeling and transfer ways of longing, desiring, dreaming, breaking free, etc. In this particular project, I want to examine how the narrator’s experiences and feelings both mirror and differ from those of older Punjabi women, while examining how histories of colonization and migration impact the ways Punjabi women see themselves and operate in relation to others.

SD: This piece seems to centralize around the concept of space and absence, and who/what belongs where. Can you talk more about that as one of your themes?

PKD: I’m still uncovering what this poem means each time I read it. Today your question takes me here: I have no memories of my biological grandparents. I’m told I was taken to India when I was two months old and that I met all of my grandmothers (I think my grandfathers had passed by then). I didn’t go to India again until I was 21. None of my biological grandparents were alive at that time.

On a broader level, the poem speaks to the absences that are within some of us all the time. Linguistically and culturally, although I speak Punjabi and grew up in a Punjabi immigrant neighbourhood until I was 10, I spent most of my adult life in elite, white, English-speaking institutions studying international relations, law and writing. I almost always feel as though I’m grasping for my own cultural and linguistic community, whether it’s through music, a phone call with my Dad or Punjabi friends. It’s so deeply who I am but also feels distant, as if I’ve lost something—an absence as you pointed out. At this stage in life, this absence is part of my fabric, part of who I am given the lives I chose (and the ones I couldn’t help but be born into). I imagine this feeling is present for many writers in different ways: a loss or absence that haunts us and can sometimes be quenched through writing. Once written, it’s momentarily released. Once published, it perhaps becomes a little easier to hold: held by many rather than one.

SD: Twice you mention names in this poem, accompanied by what feels like echoes of questions. Is this poem speaking to anyone in particular? Is it more about the answers or the asking?

PKD: The echoes of questions. I love that. The first person mentioned is my maternal grandmother, a woman I have no memories of but whose hurts I wonder about given what she passed down. The second person is me: “Preetam Kaur” — a name I’m called by certain family members but also a name that, for me, evokes Amrita Pritam, a Punjabi poet whose work I’m still coming to know but already feels deeply a part of me. In one of her poems, Pritam asks Waris Shah, a famous writer who passed before her time, to rise from his grave and write about the tears that were shed after Punjab was partitioned the way he wrote about the lover’s tears in Heer Ranjha, tears that were immortalized, that are fresh every time they’re read. While Pritam’s poem is a direct address, mine is about finding a person or place to ask, knowing there is no right person or place, that there won’t be any answers. You mentioned absence above. In my poem, the soap is without suds, the spaces beyond shade may still hold absence and at the end, the narrator wants to shed her absence. Could water do the trick? Even when her body is already clean? She’s trying to find something that cannot be found so she asks questions and connects with nature, which doesn’t provide answers but does offer some solace, and sometimes that is enough.

SD: Who are some of the BIPOC writers and artists who inspire you? Are there any other voices who influence you and your work?

SD: You used to be a lawyer. What inspired the transition to where you are now, and do you find that your past path has any influence on your work at all? What is the intersection of the two?

PKD: In an Indigenous Legal Theory class with Val Napoleon and Hadley Friedland, I came to realize that law is simply a story. Laws can change the world and stories also have the power to change the world. I love studying and investigating the meaning and power of each word, but I don’t love colonial logic and don’t feel well when I have to see, study and think through colonial logic 8-14 hours/day. I think there is powerful work to be done within the legal system, but also believe that written and oral stories offer alternate archives and ways of being, ones that allow us to find ourselves and connect with one another and the world in a good way, as forms of resistance and survival but also as ways to celebrate and find joy.

Preeti Kaur Dhaliwal (she/her) is a critical race feminist, writer, lawyer, college prof and facilitator who grew up on the traditional territories of the Semiahmoo, Katzie, Kwikwetlem, Kwantlen, Qayqayt, Tsawwassen and Musqueam First Nations (Surrey and North Delta, BC). You can sign up for her monthly newsletter here, follow her on Instagram @write.with.preeti /@jadooberry and check out her linktree for upcoming writing workshops.