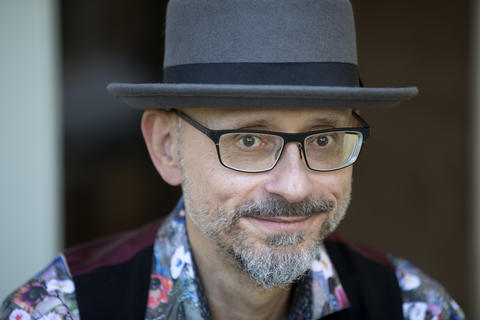 Editorial Assistant Rose Henbest's interview with Richard-Yves Sitoski about his poem “Things that Don’t Show up in Photos” from the new Autumn issue.

Rose Henbest: I always appreciate art inspired by ignored moments, as you point to in your title. Can you talk about your inspiration for this poem, for wanting to capture such a moment?

Richard-Yves Sitoski: This poem is all about the failure of my parents’ marriage – a failure which was evident probably by the end of year one, though they stuck it out for about thirty more in an endless replay of scenes such as this. Imagine this diorama as a permanent state of affairs, punctuated by violent outbursts of toxic masculinity (not pictured, but implied). This poem is at the heart of a collection I’m preparing on my family, in which I pick apart relationships going back three generations; a lot of it addresses the banality of nuclear family disasters. This is me being Philip Larkin if Larkin had been a suburban 10-year-old with incipient CPTSD.

RH: I was struck by the sensory imagery in this poem, particularly all the sounds. Was sound something you were consciously exploring while writing?

RYS: Sound play is at the heart of what I do. I use consonance and assonance the way welders use TIG wire. There are a lot of sibilants throughout, which work to speed things up, along with a bunch of short sentences and offset clauses, which break up the flow. The stop-and-go energy is suited to the hurry-up-and-wait of my family’s “hours of boredom punctuated by moments of sheer terror” approach to domesticity. As for sensory imagery, I want you there, on site, ready for when the cotter pin is pulled and the mechanism falls apart.

RH: Something that particularly interested me was your repeated use of the indefinite article “a.” Can you talk about your choice of narrative detachment from the scene and the detachment of everything within the scene from each other? Is detachment the word you would use?

RYS: I really do enjoy minimalism and a dry, detached perspective. I’m drawn to a matter-of-fact, economical, and direct narrative and visual vocabulary. At the risk of dropping names, I like the kind of space found in the stories of Norman Levine and the poetry of John Newlove. The spareness has the effect of raking light to make small objects cast long shadows, and as a result, I have to be on guard lest I belabour any points. So yes, detachment is correct. The poem describes a series of non-events, (not) happening at the same time, as a way of creating a tableau of charged emptiness – a monumental emptiness. You’d be forgiven for reading the poem in the voice of Rod Serling.

RH: Your use of simile and metaphor are fantastically effective. As your title suggests, things are not always as they appear. Can you talk about why, in each comparison, you chose to intensify the original image?

RYS: Thanks! This kind of goes back to the previous answer. It’s an anti-narrative: instead of following one event from start to finish, here many small simultaneous micro-situations are contrasted. But there is still an arc. We start with hidden dangers, and keep pushing things with dark little takes on what lies under the let-us-never-speak-of-this surface, until we get to the end and the build-up finds its resolution: we find out that my mother has been dealing with a migraine this whole time, and the pain suddenly overwhelms her; not only is there a hint of violence at the hands of my sleeping father, but there is actual violence coming from inside her own head.

RH: And finally, I would like to talk about the woman. When the narrator comes back around to the woman, the tone switches from editorial to slightly tender. I was wondering what the woman in the poem means to you - whether as a symbol of something larger, or even if a particular person comes to mind.

RYS: I’m a Gen-X’er, and my folks had me fairly late in life. Growing up, my friends’ parents wore bellbottoms and had long hair, smoked weed and made dinner from the Moosewood Cookbook. In my house, it was curling sweaters, Brylcreem, Labatt’s 50 stubbies, and chow mein was considered exotic. My mom did the best she could to make a decent life for us, with what little she had, and this despite so many strikes against her. She longed to be a working mom, like my friends’ mothers, but was trapped in the Diefenbaker era by her own fear of change and by a man who learned to be a husband from The Honeymooners. In one of my poems I explore how my dad, after showering her with extravagant gifts while they were courting, gave her an ironing board for their first Christmas after marriage. He didn’t understand why she ran to the bedroom in tears. Growing up in a household like this, you get a lot of grade-A material, and over the course of a lot of poems I’ve done my damndest to find a range of tones appropriate to dealing with my mother’s plight, based on the tragedy or absurdity of the specific situation. No matter what, though, I’m never far from elegy.

To read Richard's poetry order your copy of Issue 289 today!