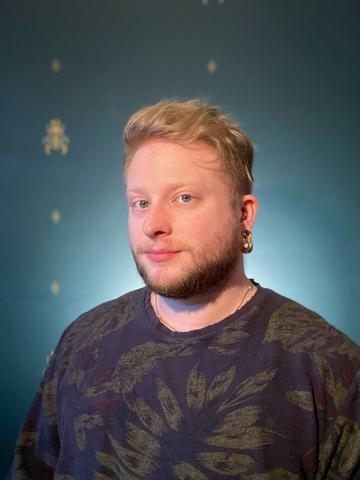 Jamie Kitts: First of all it’s a very moving piece. When I first read it I peeked at the table of contents hoping to see it in fiction, but was not surprised to see it in creative nonfiction. What made now the time to share this story?

Spencer Knight: Thanks! I’m happy to move people. Let me know if you cried, so I can brag to my writing prof!

Like most things in this story, I guess I didn’t really have a choice in the timing. I’d started the original draft back in 2017 after a particularly introspective period where I’d realized that what had happened to me was actually assault. I barfed up a long-winded draft and workshopped it a bit and then submitted it to the CBC Nonfiction Prize because I really thought I’d done something there. I didn’t win—because the story was terrible. Looking back on that draft now makes me cringe because what I’d actually been doing was journaling a traumatic experience so that I had something concrete to curl up with. I didn’t start going to therapy until 2019, so I didn’t have any of the tools to process my experience. I was writing from a dissociative, flight state, so the story was very much still in progress.

I started seeing my counsellor in 2019 for an entirely separate issue. My mom suicided when I was 12 and it wasn’t until I was 27 that I realized how deeply I was affected—how completely unfamiliar I was with my emotions and all of these physiological responses that I assumed everyone felt. So while I was in session, after developing these somatic tools with my therapist, the new opening of the story happened (the Tinder scene). I thought to myself, “Well now’s a good a time as any to unpack this,” so I did. A few weeks later, I dug up the 2017 draft and tore all 6,000 words apart, keeping only 3 paragraphs.

Regarding the greater meaning of “why now,” I think it’s important to share examples of trauma that have been worked through. To see how messy and complicated it is and to show how nearly impossible it is to process on your own. I also think it’s important to see/read stories that focus on the “victim” and the healing rather than the “villain” and the crime. It’s very easy to get caught up in the grisly details and allow those dark pieces of the human experience to pull focus, but I want to see the resolution.

JK: At the launch for Fiddlehead 293, Fawn Parker read a poem which used similar framing to “Snuff”: dialogue between a therapist and client, narrated by the client. What do you think makes counselling therapy such a timely device?

SK: I think it’s timely because we’re seeing the discussion of mental health change, so more people are seeking counselling. And as a group of people who seem to be characteristically fraught with mental health issues, it’s completely unsurprising that more writers are using counselling therapy as a framing device haha. We’d probably see even more of it if it was more accessible. (I certainly wouldn’t be able to afford it if I wasn’t lucky enough to have a job with good benefits!)

JK: The narrator seems a bit self-conscious or perhaps annoyed or reluctant with being asked to breathe and be aware of his body. With apologies to therapists everywhere, do you also find mindfulness a bit tiresome?

SK: I find it tiresome in that it’s exhausting and physically draining to do it. My therapist and I often discuss how easy it is to slip into established, long-standing patterns and coping mechanisms that I built to survive rather than to thrive. She describes it like a system of hooks, and I always picture them like giant barbed fish hooks gouged into my body. They are painful upon entry, of course, but if you don’t move or struggle, you get used to the pain, which tricks you into believing everything is fine. Knowing how painful it’s going to be to slide each of those hooks back out (barbs and all) makes it easier to stay still. It takes a lot of mental and physical fortitude to start detaching from that system, and that’s what’s exhausting. And once you’re unhooked, you have to go through an entirely new kind of pain while the holes heal up.

JK: “Snuff” is a title which, to say the least, implies a dark sense of audience. Each encounter is built like a scene out of memory, and even the therapist suggests making edits to the film reel of memory. Is there then something sinister in being the audience of this piece?

SK: My writing professor and mentor, Jessica Kluth, instilled the practice of creating and using titles that sweat, i.e, they do a lot of heavy-lifting to help make meaning for the whole piece. I had actually chosen “Snuff” originally because of all the elements of fire and heat throughout the piece. My triggers tend to burn and I try to snuff them out. The double meaning was a happy bonus that I didn’t realize until wayyyyy later and then informed a lot of the rewrites.

I would say there is something a little sinister about being the audience of this piece. You could argue that the reader is watching a series of small deaths (wink) play out over 10 pages and those deaths occur for the sake of the assailant’s pleasure, and (to a significantly lesser degree) the audience’s pleasure. I mean that in the way that reading and consuming stories is pleasurable, not that the reader is enjoying the things that happened to me.

The film reel element was also a happy accident! My mentor talks often about how we make subconscious connections while writing a piece and how those connections can become more clear while rewriting scenes. That’s why workshopping with other people is so important. They can highlight those connections you didn’t consciously realize you were making and help you reinforce them.

JK: You mention in your bio being a queer writer. As a queer writer myself, I wonder what facets of writing queerness attract you most in art. What other queer artists’ work do you enjoy, and how does it inspire your own work?

SK: I’d say I’m most attracted to writing the mundane parts of queerness (this piece notwithstanding). Those stories where queerness is just a matter-of-fact—show me queer joy and queer mediocrity!

Off the top of my head, my favourite queer writers are David Sedaris and Kai Cheng Thom. I like Sedaris for his humour and how he writes his family. There’s just such a smooth ease to how he depicts his ridiculous family dynamics—even when something is truly awful (thinking of how he writes in Calypso about cleaning out his sister’s apartment after she suicided), and then a couple pages later he’ll be walking down a beach and trying to find a snapping turtle to feed his lipoma to. I actually got the opening line for “Snuff” from a tip in Sedaris’s Master Class. He said something along the lines of “Sometimes I like to describe something that everyone knows in such a literal way that it almost becomes unrecognizable.” So in my case, “I swiped through Tinder” became “I swiped through an app that displayed men like a buffet spread,” and that really helped me take off.

Thom’s work, specifically Fierce Femmes and Notorious Liars: A Dangerous Trans Girl’s Confabulous Memoir, takes high fantasy elements to poetically illustrate very real (and often very dark) queer and trans experiences. I mean, she wrote a vigilante femme gang that hunts down and kicks the piss out of skinheads and bashers. And there are mermaids! What’s not to love? As someone who loves fantasy but struggles to write fiction anymore, Thom has inspired me to completely overhaul my memoir to play with the nonfiction form and genre and (without giving too much away) find ways to personify my trauma as fantastical creatures. It’s a lot more fun to write it, and it’s a much more interesting way to have the voices of innocence and experience interact on the page.

Spencer Knight is a queer writer living in Edmonton, Alberta. His flash and not-so-flash nonfiction stories have appeared in Saltern Magazine, filling Station, and The Bolo Tie Collective Anthology: Volume I.