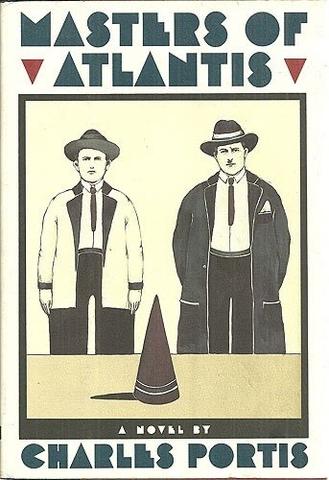 It’s become part of my daily routine over the past year or so to check in with my favourite used book websites, searching for a reasonably-priced hardback copy of Masters of Atlantis by Charles Portis. I first discovered Portis after having heard the novelist Patrick deWitt list him as an influence during an interview, and he’s since become one of my favourite authors. All five of Portis’ books are excellent, but out of a bibliography of oddball books populated by oddball characters, Masters of Atlantis is the oddball of all oddballs.

Over the course of half a century, the novel traces the onset, rise, dissemination, and long-drawn-out disintegration of the Gnomon Society, an ancient sect purportedly imbued with the secret wisdom of Atlantis, all under the watchful (though increasingly unwatchful) eye of one, Lamar Jimmerson. Beginning in 1917 France, we follow the young and aimless Jimmerson’s chance encounter with the secret world of Gnomonism, through to his drowsy middle years as leader, and into senescence. The jury’s still out as to whether young Jimmerson was duped into joining the brotherhood in the first place.

The plot (if there is one) doesn’t so much unfold as it unspools, something like a ball of twine tossed from a moving car window. Over the course of which, we’re treated to scenes like a plan to defeat Hitler and decisively win the war by using compressed air, a foolish alchemical get rich quick scheme by synthesizing a particularly unpleasant and fast-growing weed, and a failed Indiana gubernatorial campaign, running on a platform that would close all assisted living facilities and legally require all children to care for their aging parents to name just a few.

In a world where conspiracy theories and misinformation spread faster than ever, Masters of Atlantis is an interesting look, albeit comedically, into the types of people, be it grifters, fools, or so called ‘free thinkers’ who align themselves with or fall victim to things they don’t truly understand. The journalist Brian Boyle wrote an excellent piece for Slate last year using Portis’ novel to help explain the rise of groups like QAnon.

When I sat down to write this recommendation, the first thing I did was open up a few browser tabs, searching for that elusive hardback. I was scrolling aimlessly when I spotted a copy, a first edition and cheaper than any I had ever seen! I’d been searching for so long that I started sweating and I bought it triumphantly and fast before anyone else had the chance. I couldn’t believe it. This had to be fate! It was only later, upon checking the fine print more carefully, that I realized that I hadn’t bought a book at all, but just a dust jacket. And that I, almost too fittingly, had been duped.

Johnathan Fahey is a writer from Moncton, NB living in Toronto. His work has previously appeared in Geist and subTerrain. His story "AceDougieFlexProductions" is featured in the new autumn issue of The Fiddlehead.