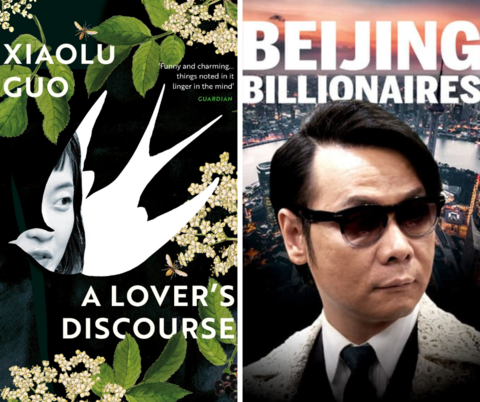 A Lover’s Discourse and Bejing Billionaires

A Lover’s Discourse by Xioalu Gou is an exquisitely written novel about a Chinese woman pursuing her PhD in London, England. The main character exists in a constant state of disorientation, having to translate the world around her into linguistic and cultural meaning. However, meanings--predominantly definitions--often fail to land upon any concrete or relevant antecedents. The beauty of Gou’s narrative lies in the patchwork that fills in the gaps when the act of direct translation is inaccurate and falters. Gou’s writing is like something woven; the texture is delicate, permeable, and at risk of tearing--despite the strength of each strand.

A Lover’s Discourse, as the title reveals, is a love story, but what fascinates me the most about this book is the main character’s research for her dissertation. She returns to China to an artisan village where entire families work on reproducing paintings, most notably, canonical works, such as Leonardo da Vinci’s Virgin of the Rocks or Monet’s Water Lily Pond. The paintings are sold for as little as fifty US dollars. When the main character visits and interviews these “ordinary tradesmen,” Gou’s experience as a filmmaker comes to the fore. These chapters have a cinematic quality whereby the main character quietly recedes and Guo securely fixes her lens on recording human activity with the least subjectivity as possible. In doing so, this part of the book reminds me of a documentary I recently viewed, Beijing Billionaires.

Beijing Billionaires, made in 2016 and directed by Naomi Zola, follows the lives of the Chinese elite. Their wealth buys them access (at times, more like a day pass) to Britain’s upper-class system. The documentary showcases Wendy Yu, a billionaire heiress, who joins The London Season and undertakes preparations to be presented as a debutante at the Queen Charlotte’s Ball. While mingling with the British aristocracy, Yu learns to stand like a swan, is schooled in the art of clay pigeon shooting, and becomes comfortable wearing a tiara. For the most part, the documentary is excruciating to watch. The shots with Yu are particularly humiliating. A lumbering, cartoonish musical arrangement accompanies scenes showing Yu parading her possessions and achievements in front of the camera. Britons are expert purveyors of their exclusive culture, and what they offer to Yu, and others like her, is a provisional tolerance dripping in condescension. Despite participating in a two-hundred-year-old tradition, it is highly questionable that Yu will infiltrate the upper echelons of the very society she is so enamoured by. After watching Bejing Billionaires, I get the sick feeling that Yu has been catfished by The London Season.

Though they may seem like strange bedfellows, I recommend pairing A Lover’s Discourse with Bejing Billionaires. What is apparent in both Guo’s book and the documentary is the machinations of white supremacy and the idolatry of Western culture as a global phenomenon. I too have been swept away with the idea that culture and artwork originating from Europe need my special attention. I was convinced that if I closely examined such things, I could congratulate myself because I would have come to understand something particularly “sophisticated,” and therefore, uniquely important. Perhaps if I was lucky--if my analytical skills were especially refined--I might be able to discern “universal truths.” Clouds would part! The sun would shine! My heathen mind would enlighten! What a load of hogwash. Thankfully, Guo offers a counterbalance to the idea that genius and taste are exclusive to the white and Western variety. The Chinese artisans toiling away to reproduce classical paintings are self-taught. They regard their work as a job that’s nothing special, “It’s just placing one bit of paint on another.” In a busy alleyway, Guo’s main character finds a reproduction of Gustav Klimt’s The Kiss, but the painter has replaced the man’s head with one of a pig. When she questions him about it, he responds, “Yes, I was so bored copying that I changed the man into a pig for fun. Don’t take it too seriously!” He’s right. I think we’ve been taking the pigs too seriously for too long.

Joylyn Chai is a Chinese-Jamaican Canadian educator, artist, and writer. Joylyn teaches English to new immigrants and refugees in Toronto. Her work has appeared in Rigorous, Thin Air Magazine, and is forthcoming in This Magazine. Her creative nonfiction essay "It’s No Big Deal. Not Really." appeared in the BIPOC Solidarities issue of The Fiddlehead.