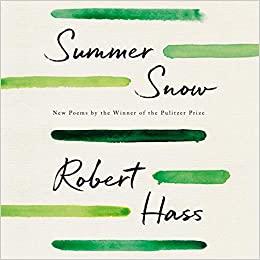 “Reading a poem by Robert Hass is like stepping into the ocean when the temperature of the water is not much different from that of the air. You scarcely know, until you feel the undertow tug at you, that you have entered into another element,” said Stanley Kunitz.

Written during the American planet’s tornadic decade just past, several of the poems in Hass’s Summer Snow address rather more temporal subjects than have tended to foist themselves upon the poet’s eye: epidemic gun-violence, protest, and a government constituted by “ice-age reptiles.” The collection looks to me like a poet swimming through a whirlpool to the water’s edge to scan the horizon in flames. And to sing.

Perhaps to encourage himself––it wouldn’t be the first time a poet wrote the poem they needed to hear––or perhaps to galvanize persistence in the next generation, Hass writes: “All you have to do is say the words. You have very little idea / What the birds think they are doing. Or what ‘think they are doing’ / Means inside a bird.”

In my view, the masterpiece of the book is an extended dialectic between Hass and Czesław Miłosz, the great (late) Polish poet Hass almost desperately reanimates for the purpose, called “An Argument about Poetics Imagined at Squaw Valley after a Night Walk under the Mountains”. Throughout, Hass conducts his syntax of suspension––In the words of Christopher Robinson, “It almost seems like Hass is worried that if he doesn’t keep his balance perfectly he might trip and fall into his own head and never be able to escape.”––which imagines “the state of mind / Produced by the fragments of the stories he would tell me” in order to oppose his own materialism with Miłosz’s forceful and informed Catholicism. He gives Czesław the last word.

Years before this imagined conversation with Miłosz came out in print, I set it to memory. An early draft appeared online in 2012 with Oxford University Press, and a recording was made of Hass reading it upon receiving the Wallace Stevens Award in 2015, which recording I dutifully transcribed (and, noting the ways in which it had evolved from earlier drafts, re-memorized). I have since recited it in part or in whole dozens of times to myself and to the lovers, friends, and family members who oblige those of us who need, at this moment or any other, to recite poems to anyone who will listen. 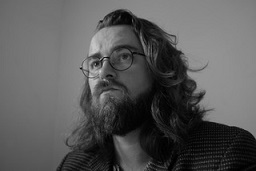 Kevin Heslop is the author of there is no minor violence just as there is no negligible cough during an aria (Frog Hollow, 2019) and the forthcoming collection the correct fury of your why is a mountain (Gordon Hill, 2021). He lives in London, Ontario. Kepp an eye out for Kevin's poetry in our upcoming Summer issue of The Fiddlehead.  Click here to subscribe!