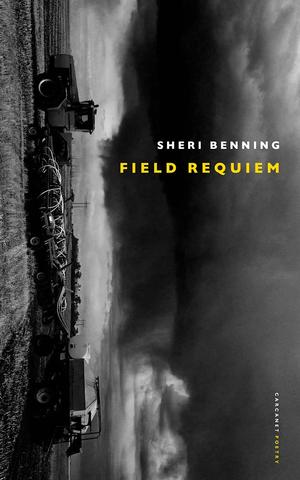 A complex and multi-dimensional grief informs Sheri Benning’s Field Requiem: grief for the loss of a family farm; appalled awareness of a heritage of complicity in the prosecution of the Dominion Land Act, its violent theft and abuse of Indigenous territory; the mourning of exile; grief for the land itself, what was done to it in the first decades of colonial settlement; and, above all, horror at what is coming, what has already arrived: the colossal foreign-owned juggernaut of immense machines that gouge, seed, and strip the chemically poisoned soil for profit. Most humans on the North American continent now live in cities and towns; few have memories of a rural childhood. But despite the explosion of interest in gluten-free café pastries, industrially grown and processed wheat remains a staple in rich-world diets. If at any point in your life you have purchased and eaten food made from industrially grown wheat — or prepared with canola oil — you have participated in the economy now controlled by agribiz, the agricultural arm of global corporate capitalism. Field Requiem is a book whose reckoning must concern you.

The book is focussed through another aspect of Benning’s heritage: Catholic liturgy. It is the singing of a funeral mass for the land and for the small, wrecked lives of those duped into serving on the Great Plains front of empire’s Four Hundred Years’ War to colonize North America. It is also the invocation of prophecies of terror and reprisal.

There are five sections, four of whose epigraphs are drawn from the Requiem Mass:

I — Exaudi orationem meum: from the Introit: Hear my prayer.
II — eleison: also from the Introit: have mercy. Here, Benning has elided the first word in the line, Kyrie, (a transliteration of the Greek             κύριε, meaning Lord).
III — . . . I am writing this / not to recall our lives, / but to imagine them. — Eavan Boland
IV — . . . dies illa / Solvet sæclum in favilla: from the first verse of a 13th (or earlier) century hymn, Dies Irae, or Day of Wrath, now one         of the customary movements of the Requiem Mass. The lines mean [The day of wrath,] that day, / Will dissolve the world in ashes.
V — et lux perpetua luceat eis: the second line of the Introit: [Requiem æternam dona eis, Domine,] / et lux perpetua luceat eis. In                 English: [Eternal rest grant unto them, O Lord,] / and let perpetual light shine upon them.

On the versos of these section pages are photographs of abandoned homesteads, both interiors and exteriors, by the visual artist Heather Benning. There are additional photographs on the first and last versos of the book, and on the verso of the final poem.

I should note here that twice in the course of the book, Benning also quotes from my own work in epigraphs. The reason I have not recused myself from a public discussion of Field Requiem is that the situation is too urgent. Benning belongs to the next generation of writers-of-European-descent who are attempting to lift the truth of what happened on the Prairies in the late 19th and 20th centuries out from under the slur of ‘prairie anecdotalism’ and into general public consciousness. My purpose in writing this review is to confirm, from experience, the critical importance of her vision.

And, to express publicly my gratitude for the unf linching clarity with which she simultaneously documents the human violence and names the rapturous beauty of the sky and the remaining wild land. There is not a trace of sentimentality in these poems; the writing is exquisitely cadenced, and intensely enactive. I am mildly synaesthetic; but this is the first time I have encountered free verse whose imagery triggered my sense of smell.

The book opens with a brief, untitled introit, and concludes with an envoi, “To Glasgow,” which was Benning’s home at the time. Inside that frame is another frame: a second and a penultimate poem, both entitled “Winter Sleep.” The first of these is an excoriating lamentation, a series of dreamscapes that charts the Great Plains’ descent into hell:

to those who have, more will be given.
Viterra’s actuaries betting on futures markets,
brokering grain they don’t own. We were told
those with nothing, even that will be taken away.

Or Alex Saretzky from Tiegenort,
blood pouring from his wrists, hands cut off
by Makhnovists requisitioning his cattle.
In my dream we tell these stories

to our babies in their cradles.
The lesson of the parable? What good is your labour
if the fruit doesn’t grow and grow and grow?
I wake in the hip-roof barn,

and where we hang the throat-cut animal,
men dangle. Hailstorm, flood, drought.
Interest rates. Debt loads. Go big, or
get out.

Just look at those who stayed —
in my dream, the men from Grünau, found
heads down, shoulder-to-shoulder, tongues
nailed to the dining table.

The epigraph of this poem reads simply Luke 19:11. The text of that verse, in the King James version, is: And as they heard these things, he added and spake a parable, because he was nigh to Jerusalem, and because they thought that the kingdom of God should immediately appear. The parable is of the servant who simply saves and protects a bequest given to him for safekeeping by his overlord; because he fails to provide the overlord with “usury,” the overlord takes back the bequest and gives it to other servants who can show significant returns on the overlord’s capital.

The epigraph of the concluding “Winter Sleep” is I Kings 19, a verse in which Bathsheba tells King David about Adonijah, “who hath slain oxen and fat cattle and sheep in abundance” and plans to usurp the throne, deposing Solomon, David’s son by Bathsheba.

fields in stook and stubble.
Stones fill the well of my throat.
Parasomnic, I can’t breathe —

Where coyotes licked the blood
of those whose land you broke,
they’ll lick yours —

but no one turns.

The voice is incantatory throughout, even as it names the weapons:

The summer he was eighteen he drove dozer through
poplar bluffs, cleared fields for farmers, $1.50 an hour,
open air cab, face lashed by willow and juneberry branches,
must of geosmin and spore from never-before-dug dirt.
Dun flash of mud hens or grouse, winterfat, loosestrife,
goldenrod, nodding thistle caught in the bushrake.

The machines that snag a pant leg, that skid and slip out of control, that backfire, that roll and crush: the brutal lives of men. (I knew them, too: the young hired hand, fingers lost to the auger; the bachelor on the next quarter, lipreader, deaf since childhood when his father, in a fit of rage, hit him over the head with a 4 x 4; my father, called to shoot the dog swallowed by the combine because my great-uncle couldn’t do it.)

And then the women. The central section is devoted to the lives of nearly a dozen of them, six of the ten poems titled “Of.” “Of / / Rosalie née Tobin. Twenty-six, 1983.” “Of / / Petronella née Klein, Nelly.” “Of / / the baby, name lost, 1906.” Of the broken marriage; the dying parents; the demented husband; of the mother abandoned in Europe; of the sisters abandoned on the farm; of being impregnated at 15 by the rich man you’re working for as a maid; of being disowned for marrying a Protestant; of bearing fourteen children.

The fourth movement — with the quotation from the Dies Irae as epigraph — is the longest. It contains five poems whose titles are the quartersection numbers assigned to units of land by the federal grid system. There are also two poems invoking the prophet Zephaniah, who denounced his nation (Neither their silver nor their gold shall be able to deliver them . . . . [1:18] This is the rejoicing city that dwelt carelessly, that said in her heart I am and there is none besides me: how is she become a desolation [2:15]); a poem that invokes Psalm 22 (My God, my God, why hast thou forsaken me?); one that invokes Psalm 130 (Out of the depths have I cried unto thee, O Lord); four focussed on the griefs and all-but-erased lives of parishioners in the area; and one titled “Great Plains Auction”:

Sure, we were sad to see our neighbours go,
bid extra on their socket sets, air compressors
leftover five-gallon pails of hydraulic oil.
Sold! the auctioneer’s speaker
rattled in his truckbed.

We told ourselves, if they could, they’d do the same.

This fourth movement is the only one with a section title: Let Them Rest. (A chapbook with this title, containing a selection of poems from the present volume, appeared from Deer Mountain Pages in 2021.) The phrase also foreshadows the short, fifth section, which consists of four poems of mourning. The book concludes with a piercing valediction, the speaker waiting on a railway platform in Europe:

A breeze lifts my hair, sweat of my nape,
a train, not mine, shoots past. Diesel,
smoke from the burn barrel at dusk,
the farm again,

dew on bluestem, my body, my breath. My face
in the windows of passing cars. I am. I am.
There is no going back.

The reason the death of the colonial experiment on the Prairies should focus our attention is what has killed it: mechanized greed on a scale that is almost unimaginable. That greed respects nothing, not even itself. We see the psychosis in nascent form in the horrors that mark the first wave of colonial settlement on the Prairies. But ultimately, Benning’s book forces us to look not only at appropriation of Indigenous land, not only at the settlers’ war with the climate and their own demons, not only at the apocalypse of North American agriculture. It forces us to look at agriculture itself. How are we to understand the Neolithic revolution? Does it mark a qualitative shift in human self-aggrandizement, or merely an extension of the tendency to take too much, against which Paleolithic storytellers as well as Neolithic prophets warned? Is that tendency characteristic of many species, becoming a global problem only when accidentally conjoined with an opposable thumb? The question is essential as a sixth mass extinction rains down around us and we intensify industrial exploitation of the land, increasing our own numbers, apparently oblivious to the requiem we thereby compose for our species, perhaps for life on the planet.

— Jan Zwicky’s
forthcoming book of essays is entitled Once Upon a Time in the West.