Making a Difference : A Review by Ian Colford of Steven Heighton's "Reaching Mithymna" 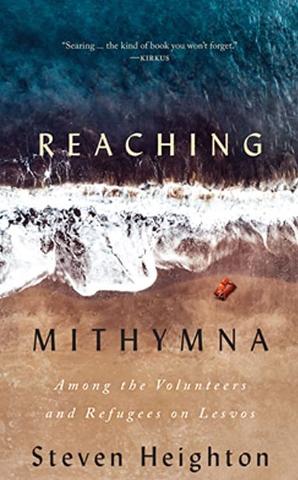 In late 2015 Steven Heighton put aside the draft of a novel he was working on — published in 2017 as The Nightingale Won’t Let You Sleep — and travelled to Lesvos in Greece to help with the influx of refugees fleeing, among other conflicts, the Syrian Civil War. Reaching Mithymna is his account of four frantic weeks spent toiling at arrival points and in refugee camps situated along the beleaguered island’s north shore. The Greek island of Lesvos sits in the Aegean Sea barely ten kilometres off the Turkish coast, a tempting and convenient destination for those desperate enough to risk an illegal, clandestine crossing into Europe.

Upon arrival, speaking of his impetus to step away from his writer’s life and get involved in an international crisis — to defer commitments and leave behind responsibilities and family — Heighton is somewhat at a loss: “I’m still not sure why I’m here, beyond a wish to do something useful, involving flesh and blood people instead of invented characters and words on a screen.” But he doesn’t get much time to brood over a rash decision that’s taken him thousands of miles from home. On his first full day, still jetlagged and just minutes after reporting to the volunteer headquarters in a restaurant called Captain’s Kitchen, he is given his initial assignment. A Greek coast guard vessel has rescued a boatload of refugees and brought them to shore for processing. Acting on a few words of encouragement and not even a pretence of training, Heighton finds himself seated at a table near the water, tasked with checking passports and copying each individual’s information to an official form. But there is a problem. To protect it, one man has wrapped his passport in multiple layers of cellophane shrink wrap. Heighton picks and pokes at the plastic, but its taut resilience stymies his efforts. In the meantime, the man stares at him, impassive, no apology, no offer to help. He tries to rip it open, applies the plastic cap of his pen to it, to no avail. As his struggle grows heated, he becomes aware of impatient murmurs and mounting frustration among those further back in the line, the encroachment of bodies pressing forward. Finally, someone hands him a knife, and when he triumphantly frees the document from its waterproof sheath, the whole crowd lets out a “tired cheer.”

As Heighton’s adventure continues, he is given a variety of jobs — distributing clothing and food, escorting refugees wet and exhausted from their crossing to waiting buses — and meets people from all over the world: trained, experienced volunteers, wide-eyed novices like himself, idealists, hippies, earnest do-gooders and burnouts turned cynical. Occasionally he encounters a refugee who speaks English, and, where he senses openness to questioning, digs into their lives, probing to learn more about the circumstances that brought them to this point.

Along the way he talks more or less freely about himself: his Greek mother, his own lapsed familiarity with his Greek heritage, his fragmentary knowledge of the language over which he often berates himself. His time in Lesvos is spent struggling to fill a fluid assortment of roles, to avoid screwing up, to educate himself and bear witness to the life and death struggle of people driven by forces beyond their control to risk everything. In many respects it is a fact-finding mission — he remains first and foremost a writer — and some of those facts are unwelcome and harrowing: for instance, another volunteer tells him about the human traffickers who, in callous, cavalier fashion, endanger the lives of their passengers: supplying refugees with “fake” life preservers stuffed with bubble wrap or even sawdust; putting them in boats or dinghies with no guide or pilot — leaving it up to the refugees themselves to navigate their way across the strait (in any weather and usually at night) or perish in the effort.
From time to time Heighton provides numbers related to the crisis, but his primary focus throughout remains the human toll of an ongoing tragedy. One senses that he can’t help himself. His novelist’s eye instinctively seeks out the telling detail — a reflexive but revealing gesture, the glance that unveils a profound weariness of the soul — and his imaginative gift transforms these observations into eloquent and remarkably vivid descriptions:

Harry is the veteran volunteer at Efthalou. Through the late summer and fall he has, among other things, helped get tens of thousands of people onto buses for the twelve-minute ride to OXY. A husky ex-rower and -rugby player, he was working on a master’s in                history when he decided, more or less overnight, to come here. That was just over three months ago — not a hundred days — yet he seems utterly depleted. Though the skin of his handsome face is lineless, his trimmed beard ungreying, under the deep ledge of              his eyebrows the eyes are dull, eclipsed. His slack features expressionless. Picture a stunned young officer of exactly a century ago, on leave after a first tour of duty in Flanders.

Heighton does not make moral judgments. Reaching Mithymna is not an outraged denunciation of injustice or a lament to the misery that humans all too willingly inflict on each other. The volunteers are never described in terms of heroism or saintliness. The refugees are humanized, treated with respect. He does not make shrill arguments or attempt to convince us of anything. Rather, he allows the story he is telling to unravel in its own fashion, the drama to build at a natural pace. In the sure-handed manner of the seasoned novelist, he lets the particulars accumulate until we’re completely drawn in and couldn’t turn away even if we wanted to. The overall mood is not so much one of sadness as regret: disappointment that here we are again, confronting another global catastrophe of our own making. The entire book is testimony to Steven Heighton’s integrity as a writer, his status as a trustworthy, clear-eyed chronicler of our times. His loyalty to the truth about what it means to be human makes this first-hand account of great suffering, and efforts to alleviate that suffering, a powerful, poignant and unforgettable statement.

— Ian Colford’s
latest book is A Dark House, published in 2019 by Vagrant Press.