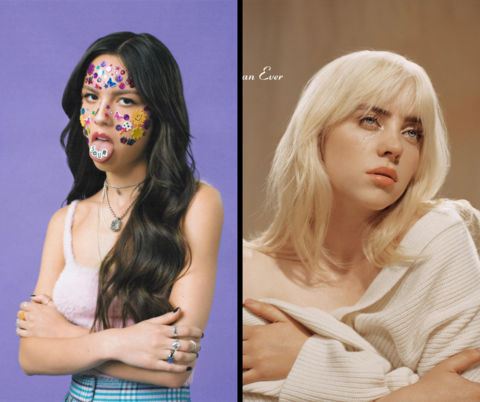 A great pop album is one of my guilty pleasures. There are a lot of pop albums out there, and more are released every week. I don’t listen to all of them, but when Olivia Rodrigo’s SOUR and Billie Eilish’s Happier Than Ever came out this year I became obsessed. I wish I could recommend just one of these, but to me they belong together in their sound and in their connection to what it means to be a teen girl. It has been a while since I was a teen girl, but in Rodrigo and Eilish’s albums I found something I was missing when I was a teen.

Music is a big part of my writing practice, and because I’m working on my first book centred around first loves, which means lots of ‘90s and early ‘00s pop culture references, I’ve listened to a lot of ‘90s boy bands, Lisa Loeb, Jewel and Alanis Morissette. There’s a lot of emotion in the songs of that era (re: love, longing, heart break and desire) but Eilish and Rodrigo are able to tap into emotions that seem so unique to those teen and early adult years, where our first heartaches feel desperate and life altering ─ like the pain of those early betrayals might split us in half and make our heart’s shatter.

As a teen listening to Morissette I was given permission to be angry. This was vital for me at that age because I was angry a lot and didn’t have many outlets for that anger. With my headphones plugged into my Discman and “You Oughta Know” in my ears I had someone saying, “be angry, this shit is unfair”, even though I’d never had a boyfriend and the most meaningful crush I’d had at that point was with Leonardo Di Caprio.  As an adult, writing about her teen years, listening to Rodrigo and Eilish I’m giving team Megan permission to be sad and exposed. In their songs about their bodies, their friend’s mental health, their broken hearts, I’ve found comfort in them recognizing that the things we go through as teen girls (me in the 90s and them in 2020s) is hard even if the adults in our lives turned our struggles into teachable moments or just part of growing up. In addition to all the pain in their music, there’s also a lot of joy and humour. Every time I hear the opening to the last track on Eilish’s album titled “Male Fantasy” where she sings “I can’t stand that dialogue/she would never be that satisfied/it’s a male fantasy” about watching porn, I can’t help but laugh.

There’s something about these albums that seem to capture everything it means to be a teen girl while wrapping it in great lyrics and beautiful voices. And maybe it’s because of what they’ve unlocked in me, that I can’t stop listening to these two albums.

Megan Cole is a tattooed food enthusiast with an obsessive reading habit. Her essays have appeared in The Puritan, untethered and more. She’s writing her first book Head Over Feet: The Lasting Heartache of First Loves. Megan lives and works on the territory of the Tla’amin Nation on the coast of British Columbia. Her essay "It Could Have Been Me" is featured in the new, all-creative nonfiction issue of The Fiddlehead. Find her on Twitter and Instagram at @megzycole