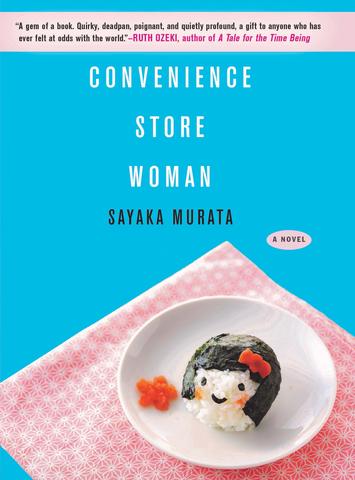 We study the rebels who change history with a grand act.

We know less about those misfits for whom survival is an act of rebellion. Who quietly, effectively cut a new path through their landscape.

In this case, the landscape is Tokyo’s financial district.

Sayaka Murato’s novel Convenience Store Woman takes apart every major component of what we call success. Then Murato attacks them — status, money, sex, love — one at a time, in the practical voice of her narrator, Keiko.

Keiko is a glorious rebel. She finds a job in a convenience store that meets her needs for basic survival and routine. And she keeps working there for 18 years, taking poetic pleasure in its uniformity.

“That pristine aquarium is still operating like clockwork. As I visualize the scene, the sounds of the store reverberate in my eardrums and lull me to sleep.”

Effective rebels barter for peace in a world that isn’t made for them. Keiko learned that as a child, by the way adults responded to her unsentimental interest in a dead animal and violent response to end a schoolyard fight.

As an adult she knows that it’s not enough to tell her community that she likes her job. So she tells people that an illness prevents her from seeking a more demanding career.

Keiko has no interest in style but recognizes other people’s need for her to look the way they expect her to look. So she creates a socially acceptable version of herself by observing women of a similar age.

“Outside work Mrs. Izumi is rather flashy, but she dresses the way normal women in their thirties do, so I take cues from the brand of shoes she wears and the label of the coats in her locker.”

She’s unsentimental about children, including her sister’s child. She attempts a partnership of convenience with a man who would be dangerous if he weren’t so lazy, based on their shared requirement to appear ordinary.

It keeps people from questioning her celibacy but invites a new kind of unwelcome attention. Keiko can’t understand why everyone is curious about her boyfriend when there are important things to do, like stacking convenience store shelves.

Murato’s story doesn’t waste a word. The prose is sharp and linear, like Keiko’s mind. I read Convenience Store Woman in autumn while Glasgow was getting dark. It fit in the back pocket of my jeans and my smallest handbag; its bright pink cover cut through the dreich. I read most of it standing in pandemic queues, two meters away from the nearest person. A situation I think Keiko would have welcomed.

Murato avoids every point in the story where Keiko could become a stereotype; there is no lazy shorthand for neurodiversity in this book. Instead, Keiko is a savvy, fully formed character who is watching the rest of us as we live inexplicable lives. She ruthlessly dissects then dismisses our mating rituals and nostalgia, need for intimacy and obedience to status. Even our empathy and instinct to love is cracked open and viewed through Keiko’s microscope.

Keiko herself chooses her compromises, and does what she wants.

Miriam Vaswani is a writer, content designer and PR based in Scotland. Her work has appeared in Gutter, untethered, Scottish PEN, The Stockholm Review and Tin House. She has lived in Russia, Germany and Tunisia, and grew up in Canada on the traditional territory of the Mi’kmaq people. Her story Dark Colours of Nature was featured in the new Summer Fiction issue of The Fiddlehead. @miriamvaswani