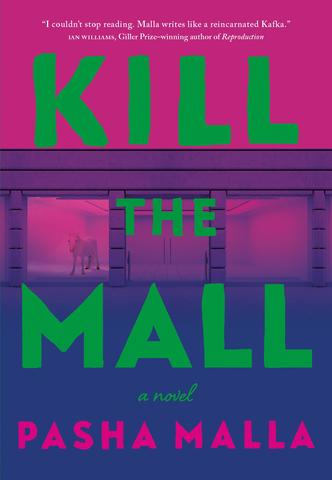 Kill the Mall, by Pasha Malla

Admittedly, I first picked up Kill the Mall because its punny, homicidal title made me chuckle. Also, I am a superficial sucker for book covers. After self-isolating in Toronto through the peak of pandemic weirdness, I felt a cosmic connection to this image of a lone horse in a concrete bunker. The vaporwave aesthetic simultaneously evoked a sense of retro nostalgia and a neon post-apocalyptic hellscape that were both far dreamier than the view from my Lysol-wiped apartment.

Within the novel’s pages, I was relieved that my shallow book judging skills remained on point. Pasha Malla’s imaginative plotting and erudite craft produced a fantasy-horror work that smoothly gelatinizes the grotesque and the absurd in a palatable (if somewhat befuddling) culturally relevant reading.

The narrative features an unnamed hapless protagonist who is invited to live and work in a suburban mall by a mysterious corporate administrator. Parodying an artist-in-residence experience, he attempts to blunder through the typical contractual requirements of “engaging the public” and “making work”. Unfortunately for the resident, this particular mall is near abandoned and on the brink of commercial failure.

Even more regrettably, the architecture of the mall is possessed by a kind of malevolent animus. This haunting manifests in a cast of illogically surreal characters, including Mr. Ponytail, a sentient adversarial bundle of hair, and Gary the pony (and cover art subject), who lives in the secret subterranean lair of the mall. While the trapped protagonist attempts to uncover the mall’s mysteries, the quirks of the concrete structure and the nature of the residency turn progressively more murderous.

As expected with a narrator who spends most of his time alone and locked inside, the plot unfolds mostly through prolonged and slightly disorienting internal dialogue. It’s not clear if the narrator has lost his grip on reality, or if readers have been blessed with the perfect nonplussed guide to a set of bizarre occurrences.

At points, the descriptions of empty corridors and hidden basement levels become reminiscent of the grand hotel in Stephen King’s, The Shining. I’ve been obsessed with old school horror lately, and the flopped commercial fortress as a stand-in for the classic haunted manor is a refreshing late capitalist twist on the familiar vengeful architecture trope. How is it so unsettling to occupy and overthrow a once-loved public space governed by a capitalist system that now seeks to destroy us?

I appreciate this novel as a deranged love letter to consumerism, art, and human connection. And I am grateful for its prescient reminder that in these late end-times, the shopping mall can still, in fact, kill us all.

Pamela Yuen was born to Hong Kong migrants in rural Ontario. She is an expressive writing facilitator with the Toronto Writers’ Collective and serves as an executive committee member of Canadian Authors Association, Toronto Branch. Her recent work has appeared or is forthcoming in Savant-Garde, the Brooklin Poetry Society, and Brickyard. Her poem Dinosaurs was featured in the Spring 2022 issue of The Fiddlehead. You can visit her on twitter: @peameala.