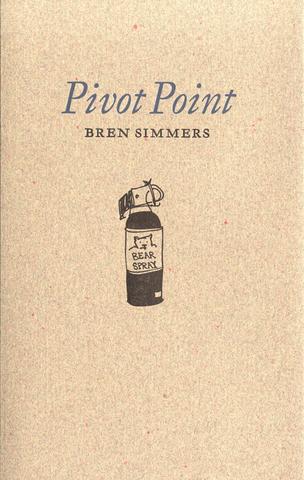 Don’t be deterred by the title Pivot Point, and its reliance on the current Covid buzzword, “pivot.” The book is an account of a nine-day canoe trip around the Bowron Lakes in British Columbia by a party of seven. Simmers packs a lot into this slim volume through prose, poetry, lists, bits of conversation, philosophical questions, description, and confessions, including the hazards of being an introvert. Her suggested pivoting is subtle, unplanned, of the inner world, and not the urgent, technical pivoting from office to home, from real to virtual, etc.

Expectations are a big part of this trip. Most of us take trips to sidestep the demands of routine, hoping for opportunities to stop and reflect, to look at the world with eyes wide open, even innocence. But on day one, Simmers discovers what she’s brought with her. In the poem “Forest for the Trees” she depicts an exchange between herself and her partner.

Look up, he tells me.
Not for birds or wildlife trees
but up.

She tries, but she is tied to the security of knowing names and passing on details of what she’s naming. Simmers is trained as a naturalist and identifying birds, insects, trees and plants is her first and automatic response. But is naming part of the inner clamour she carries into the wilderness?

By the afternoon of day two, the portages are muddy. “Steady showers scour sideways,” she says. “Blades dip into the deep emerald surface we’ll be reading for days. Sing silly songs to keep spirits up. Sponge excess water from feet.” Her description takes me back to the time I paddled the Bowron Lakes in the late 1970s. Of those nine days, it rained steadily for eight. The sound of rain on a poncho hood, on a canoe, on a tent, its hiss on the water, yes, it all came back, thanks to her deft details. The camaraderie too: “After the backs of knees dry, whisky makes the rounds.” The reminder of how quickly these journeys are over: “The horizontal lines on birch bark tallying the summer days left.”

Along the way, she recognizes the creative possibilities of leaving screens and phones behind. The group wonders about the length of the sunset this far north, but can’t Google the answer. “Without information at our fingertips, we’re left to speculate, pick up glittering piles of sand, pour them through our hands, again and again, the sun dropping like a red fishing spoon behind the mountains.” They are forced to linger over the question and fish for possibilities instead of looking up the answer and moving on.

Eight of the days are written up in prose and conclude with a poem. The poems might extend the narrative, offer a trip-drama, or comment on her fears. The prose records and poses questions but the poems, with their line breaks and wonderful imagery, intensify her voice, as if it comes from a more colourful place.

In the beautiful sonnet “Bloom” children release buckets of jellyfish into the ocean.

For one week in late June, the ocean full
of floating moons: a change purse of jellyfish
emptied into the surf . . .

She doesn’t tell them what awaits the jellies — some will be devoured, some wash up on a beach, and some will die from the fallout of being captured and observed.

Bells bob at the surface,
tattooed with horseshoes we’ll ascribe to luck
adrift in a world just opening up.

This poem follows a campfire conversation among three long-time friends, trying to reconnect. The older they get, the harder they have to work at friendship. Are they the children, pouring the jellyfish into the sea watching the moons bob away, safe for the moment in not knowing the future? Or are they the jellyfish, relying on luck, bobbing into that ever changing tidal wildness?

She says, “Each relationship has its own pivot point.” She’s referring to the confrontation on day seven between friends about an old injury. This evening dialogue in the canoe felt a bit staged to me. I preferred the challenges posed by her many questions. I loved her questions. “Does wilderness have to be synonymous with danger?” “How often does this fear of getting caught cause me to conform?” “How do I backpaddle?” “What if we learned to love the places where we live, their seasonal variations?” “Seventeen people and one outhouse?” “Why is it that tragedy sticks to us more readily?” “Shit, now what?” On the ninth day, the final day, there is no poem. But in the last line of the book, she asks, “What else am I capable of?” Expectations, including being the grand-chief identifier, have been dropped for wonder.

The book is illustrated with Emma Fitzgerald’s expressive pen and ink drawings, including the front cover image of a can of bear spray. Simmons and her party encountered a bear cub, but on my trip, one drizzly evening, a black bear walked into our camp, nose in the air, savouring the smell of bacon. “If a black bear bothers you,” the park ranger told us, “snap twigs and grunt. The bear will think you’re a grizzly bear.” Towards the fire pit walked the black bear; she knew a good meal when she smelled one. Four adults grabbed twigs and grunted. The black bear swung a right-angle turn into the woods and disappeared. A perfect pivot.