Poets as Observers of Space and Absence: A Review by Manahil Bandukwala of Gillian Sze's "Quiet Night Think" 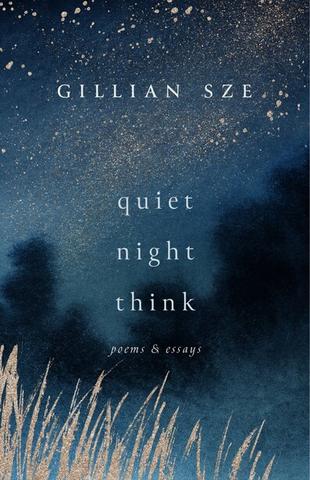 Poets as Observers of Space and Absence

I first came to Gillian Sze’s work through her chapbook, Fricatives. Fricatives has lingered in the back of my mind for years, and Sze’s latest collection of poems and essays, Quiet Night Think, will no doubt do the same. Comprised of six personal essays interspersed with poems, Quiet Night Think meditates on poetry and motherhood. Where do these intersect, and where do they diverge?

The title of the collection comes from a poem by Li Bai that Sze memorized in school. Sze discusses her attempts to translate the poem, but finding difficulty in translating the unspoken that lay between words. In this essay, she asks, “What is this space that poetry offers? Creative space. Emotional space. Reflective space. A space for possibilities” (4). These reflections on the space between words in poetry appear in every poem in the collection. The opening poem, “Instructions,” is a slender, centre-justified poem that contains incredible lines like, “What I want to tell you / is imperative — / that we are flawed / and exalted” (1).

In the essay “Sitting Inside the Moon,” Sze talks about preparing for motherhood against the practice of writing poetry. She quotes Louise Gluck, who states “we are only poets when we are writing poetry. To be a poet is an aspiration, not an occupation” (45). In motherhood, Sze describes the ways daily responsibilities took priority over writing: “I spent time with my son astonished at how efficiently motherhood replaced this act of writing. Writing was supplanted by other functions: nursing, consoling, rocking, diaper-changing, dressing, burping, gazing” (45). But just as the reflections on the space between words in translated poetry appear in the earlier poems, in Quiet Night Think Sze provides unforgettable images that come from experiences of motherhood directly. The poem “Babble” that directly precedes this essay closes with the lines: “A speck of sea twirls his hair / and sleeps and dreams of gravity” (36).

Themes of space and observation carry through the collection. What I noticed in Fricatives and notice now in Quiet Night Think is Sze’s quiet observation of the world, articulated through a careful study of language. The essays enhance the experience of reading her poetry and give an insight into how she is able to evoke the reflectiveness she does. In “The Hesitant Gaze,” the poet considers the act of sitting for hours posing for a portrait versus the instantaneous nature of taking a selfie. Long observation, Sze describes, is where ekphrasis emerges. She writes: “Paintings, I noticed, wanted me to be involved. To write from what I saw was to write what I would eventually allow readers to see of myself” (53). Circling back to her first essay, “Quiet Night Think,” “The Hesitant Gaze” similarly identifies how poets are observers of space and absence.

Sze’s experiences of coming to poetry as a way of finding a language between English and Chinese, specifically her local dialect Hokkien, resonates with me. She describes, “I turned to poetry in a way I hadn’t before: a way of coming up with a language that could be unquestionably my own” (59). The way the poems flux and change through the journey of becoming a mother also demonstrates this language of one’s own. In the poem, “Inauguration,” she writes of the week her son was born:

And no, it wasn’t easy then for you

to make the acquaintance of ceremony,

but when you squalled and I witnessed your tiny body
grow red and indignant in my arms, I was relieved. (65)

In this poem and others, Sze invites us into her world, curated by the way she
has come up with this specific language.

When carrying her second child, a daughter, Sze describes what keeps her awake. While the poems that follow her experience with her son often veer towards observances of daytime, in these poems she explores being awake at night, observing the moon. The collection closes with the long poem, “Fricatives (a Visit),” creating what feels like a full circle from the end of the book back to the beginning. In the titular essay, Sze mentioned how Li Bai’s poem, without mentioning a window, implied the existence of one because of how moonlight flooded the room. In the last essay, “That World Inverted,” she watches the moon from her window, still thinking about and around poetry.

There is a lot of learning to be had from Quiet Night Think. Sze offers valuable observations and methods of practicing writing in her essays, and then presents the results of those in her poems. The way the essays and poems speak to each other in this collection is stunning.