A Psalmist with Second Thoughts: A Review by Brian Bartlett of Steven Heighton's Selected Poems 1983-2020 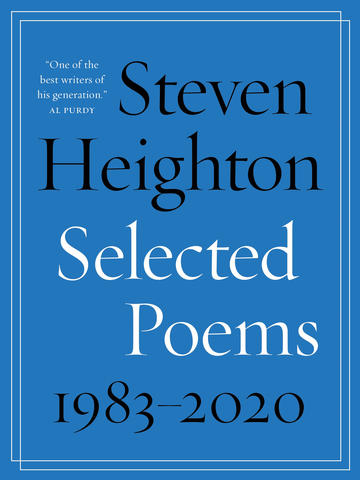 In a Zoom interview for the fall 2021 Kingston Writers’ Festival, Steven Heighton spoke of wanting “poetry that embraces the rhythm of the body” and avoids “an overthinking head that treats the body as an appendage.” From the beginning of his publishing life, Heighton has dramatized the sensuousness of human experiences in our physical awareness, inhabited spaces and surrounding landscapes. His first collection cited swimming and sailing, archery and high-jumping, skating and rowing — but equating bodily life in Heighton’s writings with athleticism would be a mistake. His lines also embrace the difficulties of our moral struggles, the inevitability of suffering and death, the strengthening given by love. Heighton prefers not to write from impersonal, cerebral heights or with opaqueness and cool cleverness, though his poems include wit and clear-eyed reflections. His work in words is also full-bodied in the nimbleness of its language and the flexibility of its structures.

Selected Poems 1983-2020 is unusually wide-ranging. Heighton’s poetry includes autobiographical elements, but it spares us navel-gazing and more often than not sees a self in relation to others, familial or social or historically linked. Family is an essential theme, from imaginings of Joseph Stalin speaking as a son to Heighton’s own experiences as son and father. “Prologue” begins, “Divorce was a shadowy, hooded caller / armed with a briefcase instead of scythe,” but the poem isn’t about traumatized children facing their parents’ divorce; instead, evoking “the hybrid, oddball / energies of our house” (the father English, the mother Greek), Heighton recalls his childhood acquaintance with divorces up and down his street, in contrast to his parents’ strong bond. A dash at the poem’s end suggests the continuance of their marriage: “. . . and leave them / face to face, still talking —.” Heighton also gives us elaborately detailed, loving yet unsentimental poems for his daughter (“Constellations,” “Herself, Revised”), and emotionally charged, carefully articulated elegies for his mother. In the broadened sense of family to include kinship between fellow practitioners of an art, Heighton writes tributes to Tom Marshall, Al Purdy and Richard Outram. As much as any other quality of his language, the exactness of his styles honours those poets.

Heighton’s politically involved poetry mercifully avoids common flaws: clichés, obviousness, preaching to the converted. In early work such as “The Machine Gunner” and the Joseph Stalin sequence that gives his first collection its title (Stalin’s Carnival), he assumes the voices of unsympathetic characters. Heighton’s mask-wearing proves more chilling and complex than many poets’ condemning addresses to an unmistakable enemy. In his later poems, his considerations of cruelty and depravity have grown even more mature, and he does succeed in addressing people he is appalled by yet unwilling to simply damn and dismiss. Provoked by a molester of choirboys, “You Know Who You Are” allows itself the forthrightness of “Sir, I still accuse / you,” but only after outlining the choirmaster’s crimes and imagining him pathetic, “saddled with [his] own soul / and nobody there to perform for.” The poem “Baffled in Ashdod, Blind in Gaza” presents a female Israeli soldier’s seeming delight in triumphing over blindfolded Palestinians. The poem chooses to address the soldier; her and her compatriots’ victims remain dehumanized. Heighton attempts empathy (“you only did / what any young recruit might do — / what I might have done myself, a little scared, a little / stoned”), but he soon imagines Jews such as Celan, Arendt and Mandelstam weeping. Punning on “Facebook wall” (the soldier posted pics of herself standing by the bound prisoners), Heighton then transcends wordplay and irony with a final one-line stanza like a cry from the heart: “Let every wall wail.” With such a poem, he could teach some of us how to write, unvoyeuristically, out of sadness and undisguised anger about inhumanities that don’t directly touch our comparatively fortunate lives.

In the 2021 Zoom interview, Heighton said “poetry should always aspire to the condition of music.” Some of us might say instead that much poetry aspires to uncommon blendings of music and speech. Poets vary greatly in degrees of conversationalness and sonic, syntactic ornateness; many of them swing back and forth between the two emphases, among their poems yet also within isolated passages. In all his books Heighton shows that mix, despite a fondness for voluptuous phrasings, which contribute to many of the most memorable lines, if also to occasional excess. (The ending of his third collection’s title poem, The Ecstasy of Skeptics, risks melodrama, not so much in its diction as in its capitalizations and pauses, in a passage already emphatic as a one-line stanza serving as a poem’s — and a book’s — conclusion: “Now, love. This way. With the lights on. Blazing.” In my copy of its original printing I’ve pencilled in an alternative, without changing any words: “Now, love, this way — with the lights on, blazing.”)

For the early poem “A Psalm, On Second Thought,” Heighton begins: “I’m not afraid of taking this harp / down from the willow / to sing — though no one / trusts song much anymore, or the singer.” In 1994 that might’ve seemed a manifesto-like call to Canadian poets for a poetry of more ear-engaging sounds; yet Heighton has always qualified with self-questionings and second thoughts, and the poem’s most raw-seeming, verbally simplest lines include: “I’m afraid / at times, / of taking this harp / down from the dead / willow to sing.” Why afraid? One possible reason among several: the poet knows that the bardic harp sometimes needs the complement of comparatively unembellished speech. Though Heighton’s ear for vowels, consonants and the excitements of ever-changing syntax are present on every page he writes, a subtle shift in his work occurred between his first three collections and — after a decade in which his life as a fiction-writer demanded much of his energy — the subsequent three collections. While the music/conversation interplay remains, Heighton’s later books more often show a trust in the powers of so-called plain speech (always a questionable phrase). He knows that poems can begin elaborately — “One more time the waters of her eyes, / of pumice-black isles / in the iris I am sailing south through / in a meltémi of light” — or with a visceral starkness: “I stand guilty of the worst sin that any man / can commit. I failed to be happy,” or “The woman whose eyesight is failing tries to read / her son’s first book.”

One reason my review of Selected Poems 1983-2020 is being completed half a year after an agreed-upon deadline is that in preparation I re-read and wrote notes on five of Heighton’s previous collections, as well as reading his most recent novel and a book of his nonfiction — so at times the process has felt like reviewing eight books. Another reason is a desire to do justice to a book of such value and importance . The title page of Anansi’s selection includes the line “Edited by Karen Solie,” but in last fall’s Zoom interview Heighton clarified that he’d discussed choices with Solie throughout the editing process. Their work must’ve involved fraught decisions about inclusions and exclusions, and faithful readers of Heighton’s poems work might notice favourites missing (“The Thief”? “Another of the Just”?), but the selection demonstrates the breadth of the poet’s vision and craft. It’s appealing to imagine the care a strong poet like Solie has shown in poring over decades of her near-contemporary’s books.

For discussion another day: Heighton’s absorption of Asian influences through his travels, language-learning and reading; the relationships between his poetry and fiction, both novels and short stories; the importance of his translations in his exploration of what Chaucer called “the craft so long to lerne.” For now, Selected Poems 1983-2020 suggests that of English Canadian poets born in the 1960s nobody has surpassed Heighton in creating a body of artistically adventurous, world-enriching poems.

NOTE: Less than a month after the above review was completed, Steven Heighton died from cancer at the age of only sixty. Many readers and writers have since experienced and expressed grief over losing such an original, superlatively dedicated writer and generous, intensely alive friend.