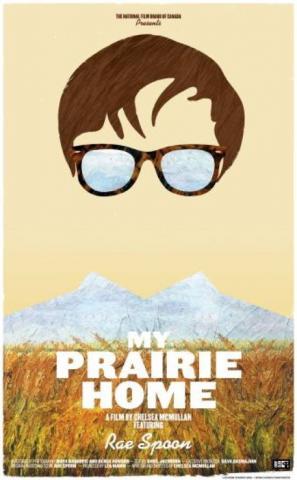 “People always ask me why I come back to the Prairies so much. It can be really awkward for me, but there is a shared history that is just as much mine as anyone else’s”
— Rae Spoon, My Prairie Home (2013)

“While mainstream representations of queerness have mostly solidified around a predictable “coming out” narrative, this chain of liminal moments and disidentifications reminds us that comings-out are always multiple, nuanced, strategic, and never complete.”
— Tyler Morgenstern, “Finding (Queer) Time With Rae Spoon” (Art Threat, Sept. 2012)

Though I’m absolutely in love with the highly supportive and interactive creative community here in Canada, as a queer, transgender Canadian I often find people like me to be either underrepresented or poorly represented in fiction. The idea that marginalized groups are underrepresented in all forms of artistic media (especially the most popular varieties) is hardly new, but even so, I always find it worthwhile to call attention to some of the great work happening by queer artists across the country whenever I get the chance. While I am often “in the know” about queer fiction because queer characters in any form of media are highly exciting to me, people without my background often simply don’t have the personal connection that spurs them to go out and seek this type of content — a gap that (as a strong supporter of the gay agenda) I like to make it my mission to bridge.
A few months ago a community group for transgender people that I’m a part of here was invited to host a screening of Chelsea McMullan’s 2013 documentary My Prairie Home at a local weekly political cinema gathering. The documentary follows the transition story of transgender Canadian singer-songwriter and author Rae Spoon. Though Spoon identified for a short time as a transgender man (a man assigned female at birth), more recently they have adopted the use of the gender neutral “they” pronoun and moved away from identifying with a binary male identity. I actually wasn’t previously familiar with Spoon’s work before watching My Prairie Home, but I immediately connected with their story as someone with a very similar transition narrative of initially identifying with a trans-male identity and later settling into a more fluid, non-binary identity. Beyond simply the personal connection, however, two of the things that I found most exciting about the documentary were its connection to Spoon’s first published book, First Spring Grass Fire (Arsenal Pulp Press 2012), and the ways it connected Spoon’s transition story with the Canadian indie/folk music scene.
For many queer people, reading literature that exclusively describes cisgender, heterosexual lives can at times feel like reading something out of a completely different universe. Often the same issue arises with music; music by and for queer people often doesn’t go far outside of local queer-oriented audiences (even popular artists Tegan and Sara have a largely queer audience), and a lot of popular music can be difficult to engage with as a queer person beyond a surface level. Folk music with a male narrative voice, like in any genre of music, can often be fairly sexist or misogynistic and engage in romanticization of traditional forms of masculinity. Spoon discusses in My Prairie Home how initially after coming out as a trans man, they went out of their way to engage this type of masculinity both in their lyrics and their on-stage performances. They took on a much more “aggressive” approach to their work, which is clearly reflected in clips included in the documentary from performances at that point in their life. Spoon’s newer music is much more relaxed and sentimental in tone; now that I’m more familiar with their work (a lot of which I’ve come to enjoy a great deal since watching My Prairie Home) I find it incredibly interesting to listen to their work with their gender transition in mind. The range of styles and themes that are engaged in the songs really speak to the variety of ways of thinking that are often tested out by people exploring gender transition.
Spoon’s first novel First Spring Grass Fire elaborates on the ways gender transition can impact a person’s coming-of-age experience even further, beyond simply being reflected in artistic creation. Spoon began writing the book while filming the documentary with McMullan in order to break down some of the barriers in communication in getting Spoon to tell their story to the camera. Over the course of filming the documentary, Spoon also emerged with a semi-autobiographical novel that presents a series of vignettes of a young person’s experience growing up transgender in a deeply Pentecostal family in the Prairies. Since publishing the book, Spoon has gone on to explore other literary endeavours such as their Gender Failure, a varied collection of autobiographical materials co-authored with Ivan E. Coyote that explores life outside of the gender binary.
Even rarer than good fiction with compelling queer characters is good Canadian fiction with distinctively Canadian queer characters. Spoon’s continued efforts to claim their own place in Canada’s environments and history speaks to me as a queer person who alternatively feels alienated by and deeply connected to my experiences in this country. With the rising visibility of transgender people in recent years I hope that honest accounts of queer existence in Canada like First Spring Grass Fire continue to emerge and emphasize both diverse narratives of queer experience, but also shared history in places that are often hostile to us. To quote Spoon, “When you don’t fit into the gender system, people tell you you shouldn’t exist and you don’t exist. Well, I’m here to tell ya, I exist.”
Reid Lodge
Fiddlehead Editorial Assistant
Tags:
features
non-fiction