[Editor's note: to celebrate the publication of The Collected Poems of Alden Nowlan (Goose Lane Editions), The Fiddlehead has a number of special features planned, including the publication of a previouslty unheard interview with Nowlan forthcoming in our Autumn 2017 issue (audio and transcript will also appear here on our website). This interview with Nowlan's friend Ray Fraser (and friend of The Fiddlehead) is the first feature.]

I recently came across this letter from Alden Nowlan to me in 1967, when he was living in Saint John and I was in Switzerland for two weeks, after being a couple of months in Ireland. I didn't realize I had it, and will have to give it to the UNB Archives to be with the rest of the letters Alden and I exchanged.

In the past year or so I've finished writing two novels, a collection of poems, a collection of stories & essays & other short writings (almost finished), and put together a 350 page "Collected Poems" for publication in the more distant future. So my brain is tired, my mental energy at a low level. But I've been requested to answer some questions about this letter of Alden's and related matters, and will do my best to comply. 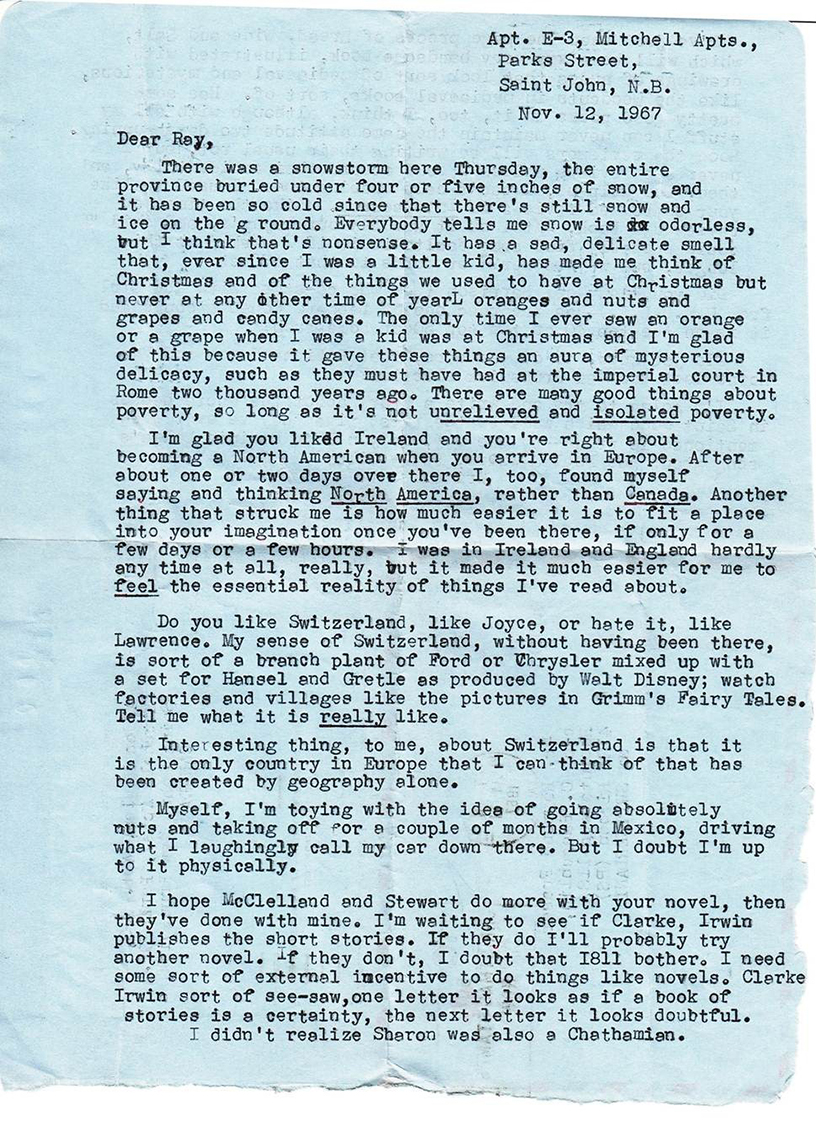 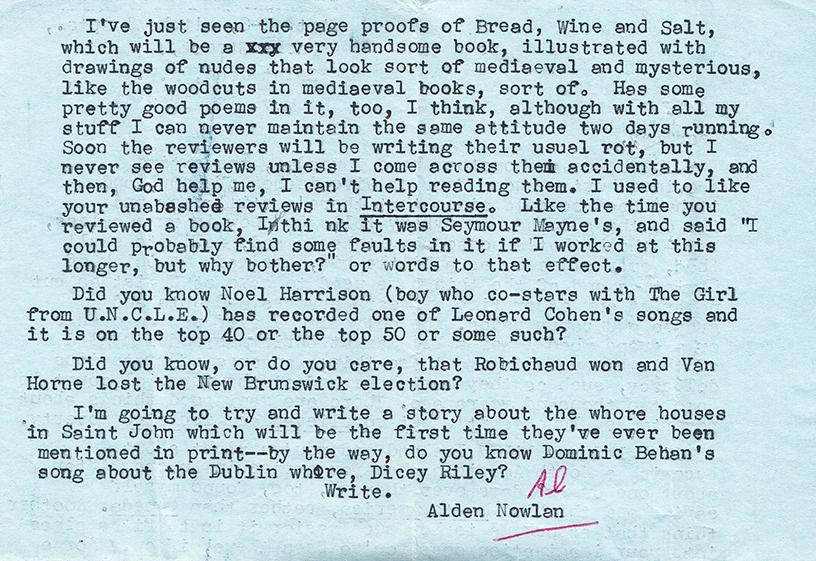 1) The letter was addressed to you in Switzerland. Why were you there?

I don't want to say too much about my first time in Europe, because I hope to write about it at length some day, preferably sooner rather than later. But briefly, I was staying with a Swiss friend who'd been in the layout department at the weekly tabloid newspaper Midnight in Montreal during the year I worked there (summer of '66 to summer of '67). I was the copyeditor and wrote most of the cover stories, and when I quit to go to Europe I told my bosses who were very reluctant to let me go that I'd see if I could come up with any stories overseas to send back to them — a foreign correspondent, like Ernest Hemingway with the Toronto Star. What I really meant was, in partnership with my Swiss friend who was quitting too and who was a photographer among his other talents, I would invent stories (in the Midnight tradition) and Conrad would take or find photos to go with them, and we'd split the money.

2) What were you doing in Ireland before this?

I was supposed to be in Edinburgh but I landed there in the middle of their Festival and couldn't find a room to rent. I went on to Glasgow but didn't like it, so took a plane to Ireland where Conrad my photographer friend and I had arranged to meet anyway, only a month or so later (at Davy Byrnes Pub). My main reason for going to Europe was to see Europe.

My next reason was to write a novel, which I did, or thought I did. I wrote 240 typed pages in six days. As I see it now, rather than a novel it was actually a rough sketch for novels and stories I would end up writing in the future. Henry Miller did something similar, only I believe he went about it consciously, as a plan or blueprint for future work.

My third reason was to be a foreign correspondent. Nor surprisingly McLelland & Stewart didn't publish my MS, and I didn't send it anywhere else, and eventually scrapped it.

M&S didn't publish Alden's novel either, and he put his away too, but he saved his, which I and many others are thankful for. It was called The Wanton Troopers, and was published after his death, and for my money is a better work that the novel he published in his lifetime, Various Persons Called Kevin O'Brien.

Clark Irwin did get around to publishing the story collection he mentions in the letter, Miracle at Indian River. It gave him the "external incentive" he needed and so he went on to write the second novel. I know about the value of "external incentive"; I work with more energy myself when I get some, but as it's often in short supply I have to rely most of the time on blind faith and raw determination to keep me producing the great works that I do.

3) Tell us something about you relationship with Alden, and the letters that passed between you.

I've done that already, in my book When the Earth was Flat, in a memoir called "The Prince of Fortara." Here's a small extract from it:

"I began corresponding with Alden in 1961, but didn't meet him until a year later when another young writer, LeRoy Johnson, and I visited him in Hartland. I was sober on that occasion, and again (and for good) on my last visits to Windsor Street in 1982 and 1983; but never during the intervening years.

For all the nights I spent at his place I can't for the life of me remember what bed or couch I slept on. Claudine was always there, of course, brimming with life and good humour; and son Johnny at times, when he wasn't off to sea as a merchant mariner.

"I'm not really sure what I can say about Alden in a few words (which is what I've allowed myself, so I won't put this off forever). His work speaks for itself and has only to be read to be appreciated. When I first wrote him back in 1961 — having seen his poetry in Fred Cogswell's Fiddlehead magazine — I was twenty and living in my home townof Chatham. By this time I was several years into my own writing . . . Alden replied and our correspondence eventually ran to 160 or so letters each.

"We got together on a good many occasions over the years. As a veteran boozer from the Miramichi once observed, a man's got ten good years of drinking in him, and from then on it's all down hill. I'd say my ten good ones coincided with Alden's, from roughly the mid-sixties to the mid-seventies.

"We had wonderfully lively parties in those days at Windsor Castle. Like one of his heroes, Samuel Johnson, Alden with a libation in hand was a brilliant conversationalist and story teller. It was unfortunate for the public he never found fame enough in his lifetime to become a feature personality on things like TV talk shows. It was also unfortunate he didn't have a sober Boswell around to record his monologues. The drinking nights were fun, but they had a way of dimming if not entirely erasing the memory . . .

"It wasn't all one-sided at his house. There was frequently a spirited crowd around him, people who could keep the show going, a lot of give and take and flights of fancy. Alden's inseparable friend, the philosopher Leo Ferrari, was probably his most frequent guest, but visitors were always coming through the door, young poets and writers like Al Pittman, Louis Cormier, Bernell MacDonald, Jim Stewart, Eddie Clinton, Lindsay Buck, David Richards, Terry Crawford and Dave Butler. Also some older, long-time friends like Fred Cogswell and Bob Gibbs. And an assortment of army officers, politicians, newspaper editors, painters, musicians and whathave you."

4) Did Alden ever write about whore houses in Saint John?

I've read all of his books and can't recall his doing so. But I did, in 1978, in my novel The Bannonbridge Musicians, so maybe I have the honour of being the first.

5) Did you care about who won the NB election?

No. Alden having been a journalist for so long, and a friend of Richard Hatfield from his time in Hartland, was much more interested in provincial politics. In fact to earn some extra money and help out his friend he wrote speeches for Hatfield when Hatfield was running for Premier and later when he was in office.

My most excellent former wife, Sharon, who gets a whole paragraph to herself in the letter, once asked Alden why with his background and political and social views he did so much hobnobbing with Conservative party members. Alden thought a minute, and replied candidly that he voted NDP every election, but he liked the Conservatives as people. They were a friendly lot and when he was around them they always made him feel welcome.

6) Did you know the song Dicey Riley.

I was a fan of Irish folk music – both the traditional and those done in the traditional manner – before going to Dublin, but I heard many I hadn't heard before when I got there. At that time the songs on the Irish Hit Parade weren't what you'd hear in North America or England; there was no sign of the Beatles or the Rolling Stones or the Beach Boys and such, it was all folk music. The only ones who could make it on the charts were singer/songwriters like Bob Dylan and Leonard Cohen.

By a stroke of luck or celestial design, the rooming house where I stayed had a number of folk musicians staying there as well, and I got to know them, and before long was travelling around from pub to pub with them on their nightly performances. The ones I knew best were Mick Treacy and Tony Malone – who were a "group" – and the singer/songwriter Sean McCarthy.

Mick went to England some years later, but Tony stayed on and became quite popular as a solo performer. You can look these lads up on the internet if you want to know more. There's a Sean McCarthy annual festival in Ireland now, so his name and works live on.

I lent Sean a copy of a Miramichi song book I had with me and had the devil of a time getting it back from him. I also lent him a copy of a poetry book I had out that year, Waiting for God's Angel, and when he read it he told a crowd of us one night that I'd probably end up being the most famous one among them. Just thought I'd slip that in. I could see some of them didn't like that, but they needn't have worried. I've managed to avoid the pitfalls of fame so far by the simple method of not becoming famous.

Paddy Reilly was another I met, but I think he felt he was among lower company. We were in Mick's room downstairs one night singing and drinking and carrying on and though Paddy sang a couple of songs himself he may have thought we weren't a serious bunch. I don't know what he thought of my version of "Peter Emberley", but Sean liked it. There was a giddy girl there, and he told her to hush up and stop laughing.

That's as far as I go. I don't want to give too much of my story away in this abbreviated form.