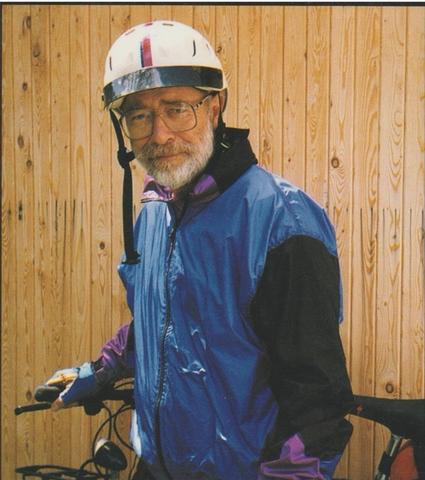 We are saddened to report the passing of former Fiddlehead editor Kent Thompson. The following obituary was written by his son G. David Thompson:

Friday the 13th of August 2021, marked the passing of Kent Elgin Thompson, who died peacefully in his sleep in Annapolis Royal, Nova Scotia after a brief illness.  Kent was born with curly blond hair (to the annoyance of his older sister) the day after Groundhog Day in 1936, to parents Maurice and Clarice (née Graves) Thompson, in Waukegan, Illinois. He later returned with his parents to their familial roots in Washington County, Indiana where Kent got his first job at a haberdashery and like every boy in Indiana, played basketball, in his case, on four teams at the same time with nary a hope of playing beyond high school because his father was too short.  Upon graduation from Salem High School and at the beginning of the end of his curly blond hair, he attended Hanover College in Hanover, Indiana (home of fictional character Woody Boyd from Cheers), which included a one-year exchange to the University of Exeter in England. It was then on to the University of Iowa for a master’s degree.  He funded his education through scholarships (his report cards describe an overachiever), raising 5000 chickens in his parents’ backyard, sweeping a factory floor and working on a small-town newspaper in Pekin, Indiana where he covered the local stock car races and operated the linotype press.  Somewhere in all of this he managed to play semi-pro baseball, which was “semi” because some of the players were paid, but he was not.

Armed with a master’s degree, he joined the United States Army before they had a chance to draft him in 1959 (he received his draft notice while on basic training). He served three years in the Counter-Intelligence Corps, starting at Fort Holabird, Maryland where he met and married Michaele Fowler in 1960 prior to being stationed in Cincinnati, Ohio, where he was most certainly accidentally placed in charge of all nuclear response in the Ohio-Indiana-Kentucky tri-state area for at least three days. Discharged as a “buck” sergeant in 1962, he started his first teaching job at Ripon College in Ripon, Wisconsin where he chaperoned a college ski trip that included a young Harrison Ford, who apparently remained solo throughout the trip. Not too long afterward, he won a Fulbright Scholarship to attend the University of Wales at Swansea. The doctoral research he conducted into Dylan Thomas is still widely cited (though not wisely by some of his students – always know your professor’s area of specific expertise in order to avoid mentioning it) in academic analyses.

Upon return to the United States in 1965, now Dr Thompson took a job teaching at the Colorado Women’s College in Denver, which he did not enjoy and so when he was offered a job in New Brunswick (which his wife had to explain to the moving company was in Canada, not New Jersey) he jumped at it, packed up his young family, and joined the wave of immigrants streaming north across the Canada-US border in the mid-1960s. He and his family jumped right into being Canadian and readily accepted that there are only three downs necessary in gridiron football. Kent even tried to teach his sons how to play hockey with a questionable degree of success.  Unfortunately, despite their hoosier pedigree, neither son showed much talent for basketball.

From his arrival in 1966, until retirement in 1994, Kent was a professor at the University of New Brunswick where he taught English Literature, Creative Writing and Theatre.  Early in his tenure at UNB, he was also the Editor (1967-71 and 1974-75) of “The Fiddlehead,” Canada’s oldest literary magazine, where he was noted for his promotion of young Canadian writers and Canadian literature in general. Later on, he was again promoting Canadian literature as the Canadian Exchange Writing Fellow at the University of Edinburgh, Scotland in 1982-83.  An instrumental founding member of the Writers’ Union of Canada, he was notably proud of his work in establishing the Public Lending Right. Over the years, he has authored numerous works of fiction, including five novels, two books of poetry, two books of short stories and many works for television, radio and stage.  He has also edited a number of anthologies and been a jury member for several literary prizes, including grants from the Canada Council for the Arts and the Governor General’s Literary Awards.  In his own right, he was nominated for a Stephen Leacock Award for Married Love and he received a number of awards, including fellowships and Canada Council grants and bursaries. Known for his sense of humour, he once worked on the production of King of Kensington and his play Kid Humley’s First Game was turned into a pilot for the Canadian Broadcasting Corporation. In addition to his work in fiction, he published a book on cycling in the Maritimes, for which he received the Evelyn Richardson Prize for non-fiction.  Active in the arts throughout his life, he was the founder and Artistic Director of the Annapolis Royal Theatre Company, which sought to develop young actors in Nova Scotia and in conjunction with the Town of Annapolis Royal, promoted the history of the local area, notably with the play, Washing Soldiers, a collaborative effort with other local artists.  His most recent publication was, “The Man Who Said No,” a biographical essay of an Annapolis Royal Loyalist.

Outside of the Arts and academia, Kent was an avid cyclist and a terrible handyman, despite his ability to name and describe the use of virtually any tool (because his father had them all).  His adventures included cycling in Cuba and cycling naked down a mountain in Cape Breton (as part of a group of like-minded eccentrics).  A Great Depression era baby, the amount of money he spent in the name of frugality and finding solutions that were adequate would have made Heath Robinson and Rube Goldberg proud.

Kent is survived by his wife of 62 years, Michaele (née Fowler), his sons Kevin (Francine) and David (Ann Marie), his sister Joan Vickers (Hugh), his sister-in-law, Honey Fowler and his grandchildren: Kate, Meghan, Liam and Duncan.  At his request, there will be no funeral,  but a celebration of life is being planned for a later date. His body has been donated to Dalhousie University for the advancement of science.  In lieu of flowers, a donation to any literary or cycling charity would be much appreciated. He will be sorely missed by his friends and family, but by his chickens not at all, for they have all been eaten.

Permalink Submitted by Elizabeth Hanton (not verified) on Sun, 08/22/2021 - 23:17
By any conventional measure, I didn’t know Kent Thompson long or well. In fact, our acquaintance was condensed into a roughly two-week period: the Christmas season of 1989/90. At that time, I was one of a gaggle of under-employed journalists in New Brunswick who wrote on any topic for anyone who would pay. Many of us picked up short-term contracts – anywhere from one day to a couple of weeks – with the CBC. I had moved to Fredericton in 1988 to live with my fiancé and was one of the journalists hoping to get work, on air or behind the scenes, at the CBC. And so began my winding path to a Christmas season spent reading the news during CBC Fredericton’s afternoon show, hosted for that period by Kent. I’m not sure how Kent was drawn into his role, but he was born for it. It was an odd programming mix: Kent hadn’t hosted a radio show before, I had never read the news on air, and – if memory serves – the producer had not actually produced a program before. And yet it worked. Kent could take the smallest thread of a story and spin it into something with depth and nuance and charm. It was that talent that held the show together. I remember one afternoon in particular where, after the newscast, Kent played a song about a car – I’m pretty sure it was Dan Seals singing My Old Yellow Car. As it played, I told him about my first car, a decrepit yellow Pontiac Astre that seemed like the on-ramp to a new world for me. As the song ended, Kent took that small, slight story and spun it into a meditation on youthful dreams. It was magic. Working with him will always be a warm and happy memory for me.

Permalink Submitted by Anne Mitton (not verified) on Tue, 08/24/2021 - 15:11
Kent Thompson was a mentor to many aspiring writers and especially to me. It is because of Kent I still write and teach writing today. It was he who motivated his students to explore all genres of writing. He was an inspirational teacher who honoured your efforts and believed in your potential. He celebrated your successes and constantly encouraged an appreciation for the written word. I will be forever grateful to him for opening a world in which one can create narratives through the lens of imaginative thought. I shall miss his generous spirit and his unique perception of life.

Permalink Submitted by John Degen (not verified) on Tue, 08/24/2021 - 15:55
Canada's writers are grateful for Kent's dedication to the national literature, and for helping to establish the PLR, which has rewarded now generations of authors for their contributions to library collections. A lovely tribute.

Permalink Submitted by Rhea Tregebov (not verified) on Tue, 08/24/2021 - 22:42
I am so sorry to hear of Mr. Thompson's death and so inspired by the story of his life. We have so much to be grateful for thanks to his generosity, intelligence and spirit.

Permalink Submitted by khovey on Wed, 08/25/2021 - 08:17
In 1989, living in Hatchett Lake, Nova Scotia, perilously employed while also trying to write and support our young family of four, out of the blue someone named Kent Thompson invited me to be writer-in-residence for one year at the University of New Brunswick. This was incredible for two reasons. One, I could write full-time. Two, I had but one frail book out with a tiny publisher, and there were hundreds of better and more famous writers out there who didn't get Kent Thompson's call. Being chosen, and paid to write, was empowering. Kent lent me his old black van to run back for furniture and clothes. He and Michaele had us to dinner. Our family grew to love Fredericton. I wrote and wrote. Either no-one noticed I was there, or I failed to make enough enemies, for I was invited to do a second year. I wrote and wrote some more. We were there nine years all told, and though by then I was teaching at UNB myself and Kent had moved on to Nova Scotia I was always grateful for what was, in effect, the chance to work at my dream. The last time I saw him, I had arrived in Annapolis Royal to research Champlain's first settlement for my novel The Order of Good Cheer. As I paused at a light, there was Kent cycling by, leading a half dozen other cyclists, tourists I think, showing them around. I would be seeing Kent later that evening so I didn't wave or call, but I was struck by his face. I hadn't seen him in maybe ten years. He was smiling as he pedalled. He looked like the happiest man alive. — Bill Gaston

Permalink Submitted by Forrest Orser (not verified) on Wed, 09/01/2021 - 18:28
I remember Kent fondly. I took a creative writing course from him. I learned a lot and he was very encouraging. — Forrest Orser

Kent was a genius

Permalink Submitted by Theodore Colson (not verified) on Fri, 10/01/2021 - 14:14
He was skeptical of academics---I always saw his point, but wasn't going to give up the money, or his wonderful theatrics. My family friends who had never been to a live play were overwhelmed by his Annapolis Royal Importance of being Ernest.